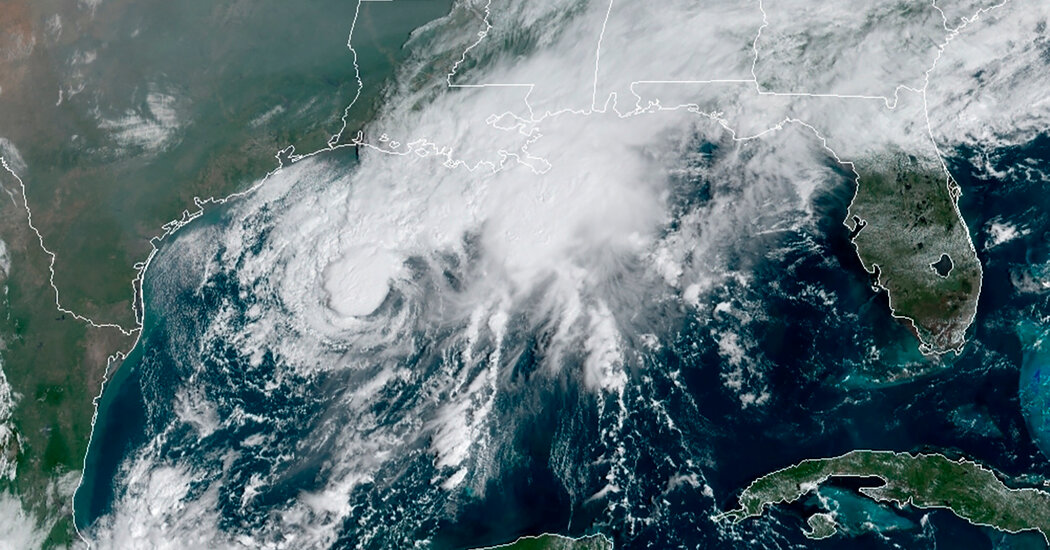 As Tropical Storm Beta stirred in the Gulf of Mexico, several warnings were issued Sunday across sections of the Texas and Louisiana coast still reeling from damage by Hurricanes Laura and Sally.

Forecasters warned of storm surge and tropical storm conditions from Beta, which was moving at six miles per hour on Sunday. The storm is likely to move inland on Monday and remain close to the southeastern Texas coast on Tuesday.

Beta had maximum sustained winds near 60 m.p.h., the National Hurricane Center said. There will be little change in the storm’s strength as it approaches the coast, but it will most likely weaken as it moves inland, the center said.

The storm was about 120 miles south-southeast of Galveston, Texas, as of late Sunday afternoon, according to the Hurricane Center, which issued a storm surge warning from Port Aransas, Texas, to the Rockefeller Wildlife Refuge in Louisiana.

The storm could cause tornadoes on Monday along the Texas and Louisiana coasts, forecasters said.

The coast may not be spared heavy rain and storm surge similar to the effects of other storms that have slammed the Gulf Coast this hurricane season, said Dennis Feltgen, a meteorologist with the center.

Beta is expected to produce six to 12 inches of rainfall through Thursday, with isolated pockets that could total 15 inches from the middle of the Texas coast to southern Louisiana, the Hurricane Center said on Sunday.

The storm surge could be as much as four feet.

“The combination of a dangerous storm surge and the tide will cause normally dry areas near the coast to be flooded by rising waters moving inland from the shoreline,” the center said.

Voluntary evacuation orders were issued on Saturday for the Bolivar Peninsula and Galveston.

Beta, the 23rd named storm this hurricane season, formed after meteorologists exhausted the 21-name alphabetical list and switched to the Greek alphabet.

This is only the second time the Hurricane Center has turned to the Greek alphabet for new names. The first was during the 2005 hurricane season, when meteorologists used six Greek names. That season had a total of 27 named storms.

Beta formed on Friday, soon after the season’s alphabetical list was exhausted with Tropical Storm Wilfred and Subtropical Storm Alpha. It was the first time since 1893 that three storms developed in a single day, Mr. Feltgen said. The hurricane season is set to end on Nov. 30.

Five storms have made landfall along the Gulf Coast this hurricane season: Cristobal, Hanna, Marco, Laura and Sally.

Hurricane Sally drenched the Florida panhandle and the Alabama coast on Wednesday as it made landfall as a Category 2 hurricane. Floodwaters reached above five feet in Pensacola, Fla., and more than 300 people were rescued in Escambia County, Fla.

Residents in Louisiana are still reeling from Hurricane Laura, a Category 4 hurricane that made landfall on Aug. 27 with 150 m.ph. winds, carving a destructive path that residents compared to Hurricane Rita in 2005.

Early last week, there were five named storms in the Atlantic — Paulette, Rene, Sally, Teddy and Vicky — a phenomenon that had not happened since September 1971, the National Oceanic and Atmospheric Administration said.

On Sunday, weather forecasters said Tropical Depression Wilfred, the last storm of the hurricane season’s exhausted alphabetical list, should weaken in the next few days and eventually dissipate.

Subtropical Storm Alpha, the first named storm this year using the Greek alphabet, was short-lived and made landfall in Portugal on Friday, Mr. Feltgen said.