The latest tropical storm in an exceptionally busy 2020 Atlantic hurricane season is crawling off the coast of Texas, threatening to bring flash flooding to areas still impacted by Hurricane Laura.

“It’s not really moving anywhere, but it will eventually start to do so,” Fox News’ Chief Meteorologist Rick Reichmuth said on “Fox & Friends Weekend.” “Probably make some sort of landfall. A strong tropical storm across parts of the central Texas coastline, it’s going to bring a lot of rain.”

BEST WAY TO PREPARE FOR A STORM SURGE

According to forecasters at the NHC, Beta is forecast to slowly move towards the Texas coast and make landfall by Monday night. 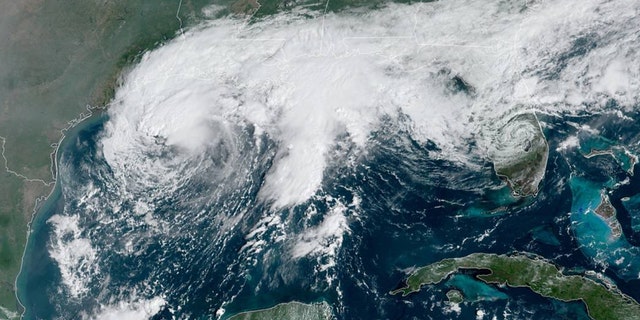 Tropical Storm Beta swirls over the Gulf of Mexico off the coast of Texas and Louisiana on Sept. 20, 2020. (NOAA/GOES-East)

Little change in strength is forecast before Beta reaches the Texas coast, and weakening is anticipated once the storm moves inland. Earlier predictions had Beta reaching hurricane strength before making landfall.

Forecasters warn that through Thursday, Beta is expected to bring 8 to 12 inches of rainfall, with isolated amounts of 20 inches, from the middle Texas coast to southern Louisiana.

“Tropical Storm Beta is forecast to move very slowly toward the Texas coast over the next couple of days,” the National Weather Sevice’s Weather Prediction Center tweeted.  “Heavy rain will likely lead to flash flooding  from the middle Texas coast to southern Louisiana.”

Beta’s slow movement, including persistent winds, raised concerns about a dangerous storm surge and tide that could reach up to 4 feet in some areas.

“A lot of rain for some people,” Reichmuth said on “Fox & Friends.” 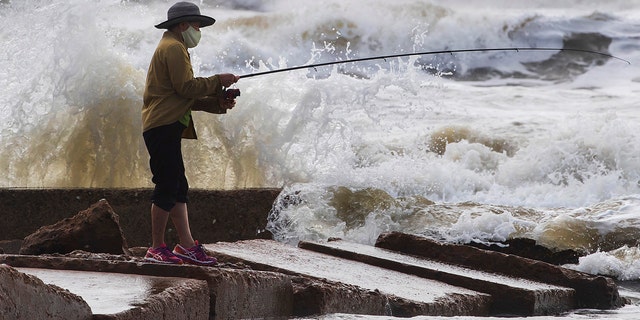 Waves crash as Houston resident Tinh Pham fishes from the rocks at Diamond Beach on the west end of the Galveston Seawall in Galveston, Texas on Saturday, Sept. 19, 2020. (Stuart Villanueva/The Galveston County Daily News via AP)

Mayor Pro Tem Craig Brown said in a statement that high tides and up to 10 inches of expected rainfall would leave roads impassable, especially along the city’s west end and low-lying areas. 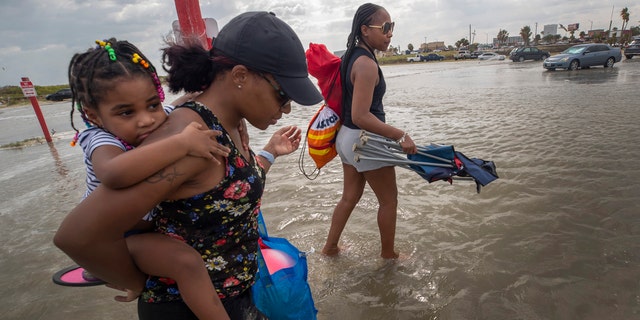 County Judge Mark Henry said during a Saturday news conference that his concern is also based on rising waters creating a storm surge and that a mandatory evacuation is not expected. 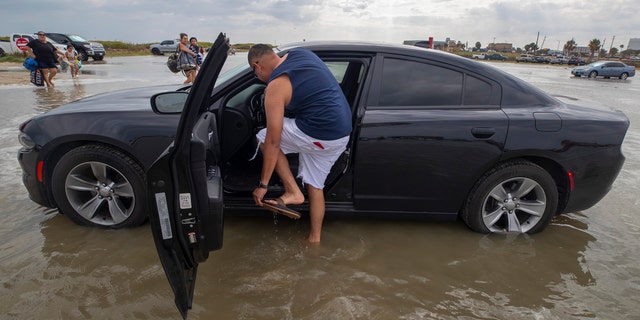 “If you can survive in your home for three or four days without power and electricity, which we’re not even sure that’s going to happen, you’re OK,” Henry said. “If it’s uncomfortable or you need life-support equipment, maybe go somewhere else.”

The storm system may bring more misery to Lake Charles, La., where thousands of people remain without power more than three weeks after Hurricane Laura slammed into the region.

Donald Jones, a NWS meteorologist based in Lake Charles, said in a Saturday briefing that Beta could bring up to 20 inches of rain in parts of the area. 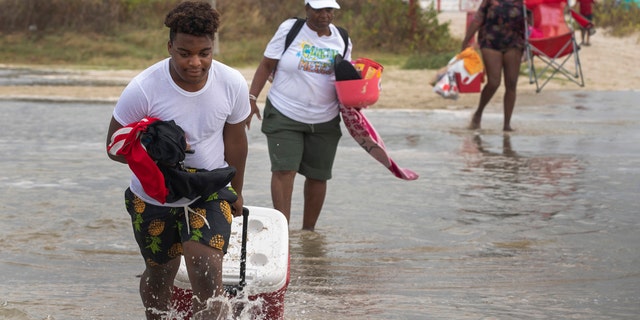 Tyler Heads totes his belongings through tidewaters as he and other beachgoers cross the flooding Stewart Beach parking lot in Galveston, Texas on Saturday, Sept. 19, 2020. (Stuart Villanueva/The Galveston County Daily News via AP)

Imelda, which struck southeast Texas in 2019, was one of the wettest cyclones on record while Harvey dumped more than 50 inches of rain on Houston in 2017. But if Beta slows down, rainfall totals could go higher than 20 inches

“Harvey was a very specific and unique event, but we are talking about the same idea in terms of very heavy, heavy rainfall,” he said.

Beta is one of three named storms whirling in the Atlantic basin during an exceptionally busy hurricane season. The 2020 Atlantic hurricane season has broken numerous records, as forecasters on Friday, ran out of traditional names and went to the Greek alphabet for storms Alpha and Beta.

This was only the second time in history that hurricane center forecasters have had to pull out the Greek alphabet for names, with the last time being 2005.

If the system makes landfall in Texas it would be the ninth named storm to make landfall in the continental U.S. in 2020. Colorado State hurricane researcher Phil Klotzbach said that would tie a record set in 1916.

That’s far above an average year. Based on 1981 to 2010 data, that is 12 named storms, six hurricanes and three major hurricanes.

So far this year, there have been 23 named storms, including eight hurricanes and of those, two major hurricanes.

Parts of the Alabama coast and Florida Panhandle are still reeling from the effects of Hurricane Sally, which roared ashore on Wednesday.

Dolly Parton gets Covid-19 vaccine, jokes she got a ‘dose of her own medicine”