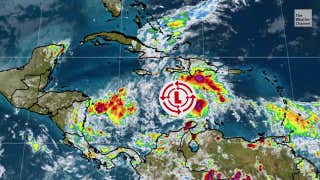 As a reminder that there is one month left in this hurricane season, we’re watching yet another tropical depression in the Caribbean, headed for Central America. It could bring significant heavy rainfall and gusty winds to Central America at the beginning of November.

This depression should be watching in the week ahead as it has the opportunity to move closer to home.

Twenty-Nine should gain the name “Eta” in the days ahead, which would be the first time that name has been used. A named tropical storm would also tie the historic 2005 Atlantic Hurricane Season for most named tropical or subtropical storms in a season.

What We Know Right Now

The newly-formed depression is bringing showers and thunderstorms to Hispaniola and to northern Colombia.

This system will move generally westward through at least Tuesday with a gradually decreasing forward speed as it reaches the western Caribbean.

This depression is moving into the warmest water temperatures in the Atlantic Basin, surpassing 85 degrees at times in the expected path of this system. This is still very supportive of tropical development and intensification.

Wind shear – the change in wind direction and wind speed, which typically keeps a lid on tropical storm and hurricane intensity – is expected to remain low.

Regardless of development, this system will produce heavy rain and possible flooding in Central America, Jamaica and the Cayman Islands through next Friday.

More than a foot of rainfall is possible in parts of Central America, but this forecast will be refined over the weekend.

Gusty winds are also likely if this system nears Honduras or Nicaragua, but these details will need to be adjusted in the days to come.

What We’re Figuring Out

After Tuesday, the track forecast is much more uncertain.

Many computer models show whatever this system becomes meandering near Nicaragua and Honduras during the middle to end of the upcoming week.

At that time, the system will interact with a high-pressure system, or a ridge or dome of higher pressure, which should be located over Mexico, the eastern Pacific and/or the Gulf of Mexico.

That ridge should guide the tropical system, but both the location of this ridge and its strength are uncertain.

There are at least two possible scenarios that could unfold toward the end of next week:

Neither solution is slightly more likely than the other at this time.

The Hurricane Hunters may fly out to this system on Sunday afternoon to help this forecast improve.

November in the Tropics

Tropical development isn’t all that unusual in the western Caribbean in early November.

In fact, several storms have formed in this area over the last 70 years.

Notably, hurricanes Paloma (2008) and Michelle (2001) have formed near Central America and then moved northeastward toward Cuba. Paloma intensified to a Category 4 near Cuba before weakening to a Category 2 at landfall in the country, causing heavy damage in both Cuba and the Cayman Islands. Michelle was one of the most significant hurricanes in Cuban history at the time, causing billions in damage as a Category 4 hurricane.

We should expect one named storm every other November, and one November hurricane roughly every three years. Of course, some years are more active than this while others are quieter.

Historically, most systems that form in the western Caribbean are scooped up by the dipping jet stream over the United States and pushed northeastward over Cuba and the Bahamas and out to sea.

Other tropical systems form in the open Atlantic and around Bermuda or the western Atlantic. These systems are typically spawned by drooping cold fronts in that region or other orphaned low-pressure systems that break off from the jet stream.

By the end of the month, this jet stream makes it increasingly inhospitable for tropical systems to form in the Gulf of Mexico and the western Atlantic. Water temperatures increasingly get too cold for tropical development elsewhere in the basin, leading to less frequent systems.

The Weather Company’s primary journalistic mission is to report on breaking weather news, the environment and the importance of science to our lives. This story does not necessarily represent the position of our parent company, IBM.