Tropical Depression Beta Still a Flash Flood Threat From Texas Into the Southeast, Including the Houston Metro – The Weather Channel 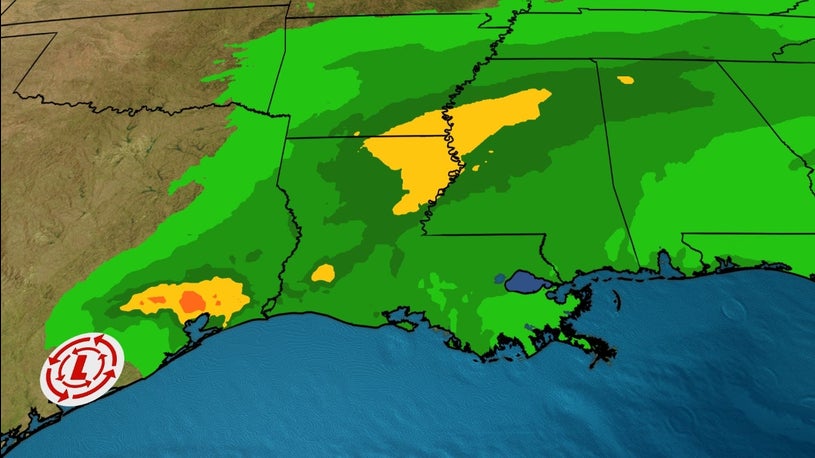 Tropical Depression Beta may still produce more significant flash flooding near the Texas Gulf Coast, including the Houston metro area through Wednesday, then will be a lingering flood threat into the Southeast through Friday.

Beta was downgraded to a tropical depression late Tuesday morning and is moving slowly just inland from the Texas coast. It made landfall as a tropical storm around 10 p.m. CDT on Monday night along the Matagorda Peninsula.

Bands of heavy rain and thunderstorms from Beta continue to soak parts of the middle and upper Texas coastline.

The heaviest rain so far has fallen in southern parts of the Houston metro. Rainfall totals of up to 14 inches have been measured in this area in just over 24 hours ending late Tuesday afternoon.

Over 100 high-water rescues were needed Tuesday morning in southern Harris County, according to local law enforcement. Some homes have been flooded, as well.

Overnight Monday night, radar estimated a small area northeast of Victoria, Texas, may have picked up 8 to 10 inches of rain.

Flash flood watches have been issued by the National Weather Service from the upper Texas coast to southern Louisiana, including Houston and Lake Charles, Louisiana.

Beta is forecast to move very slowly northeastward near or just inland from the upper Texas coast into extreme southwest Louisiana through Wednesday. It should become a remnant low by Thursday as it moves into the lower Mississippi Valley, before heading toward the Tennessee Valley by Friday.

Heavy rainfall and flooding will be the main threat from Beta going forward.

(MORE: A Hurricane’s Forward Speeds Can Be As Important as Its Intensity)

Another round of heavy rain is possible through early Wednesday near the upper Texas coast, possibly including parts of the Houston metro area. That’s where the National Hurricane Center predicts an additional 4 to 8 inches, with locally up to 20 inches of storm-total rainfall.

From Wednesday through Friday, locally 2 to 5 inches of rain is possible in the lower Mississippi Valley and Tennessee Valley, with local flash flooding and some minor river flooding possible.

Water levels were over 3 feet above normal on Tuesday morning at several tidal gauges on the upper Texas coast near Galveston Bay. That resulted in moderate or major coastal flooding in some areas.

A storm surge between 3 to 4 feet was measured early Monday morning in many of the same locations. The gauges indicated that this amount of water rise resulted in major coastal flooding.

Modest surge flooding was also reported along Corpus Christi Bay, in Port O’Connor and southwest of Freeport, Texas, among other locations Monday.

Storm tides at Port Isabel, Texas, were highest since Hurricane Ike in 2008, according to the NWS-Brownsville, Texas.

There’s also been coastal flooding in southeast Louisiana and Mississippi, reaching moderate levels in some areas.

This required the closing of Louisiana state Highway 1 in Golden Meadow, as well as some roads around Lakes Maurepas and Pontchartrain, the eastbank of Lower St. Bernard and Plaquemines Parishes, and in Hancock County, Mississippi.

The peak wind gust measured on land was 59 mph at Lolita, Texas, just after midnight Tuesday.

Port O’Connor, Texas, clocked a 55 mph gust while Victoria, Texas, recorded a peak wind gust to 52 mph in the pre-dawn hours of Tuesday morning as the center of Beta was near.

The Weather Company’s primary journalistic mission is to report on breaking weather news, the environment and the importance of science to our lives. This story does not necessarily represent the position of our parent company, IBM.