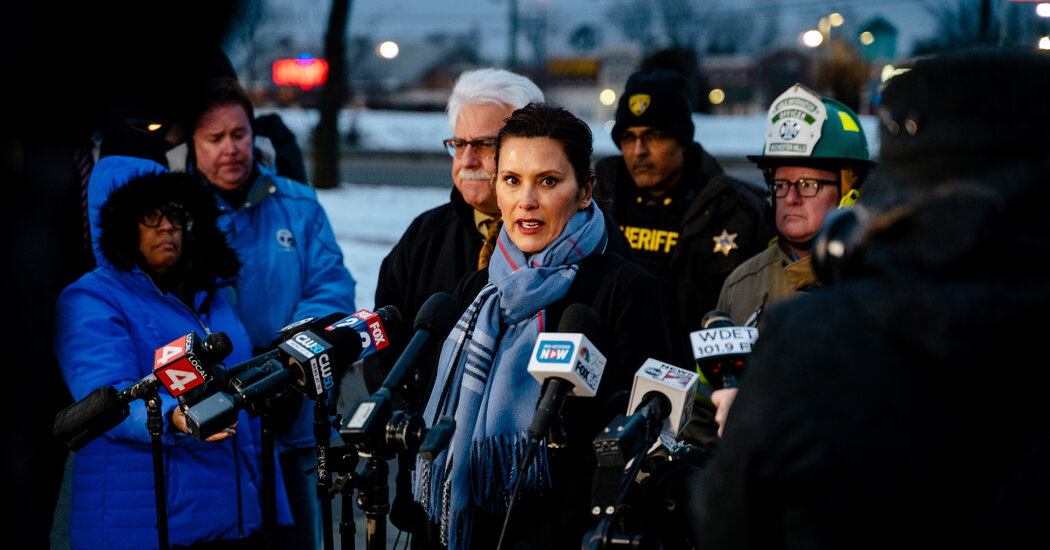 GRAND RAPIDS, Mich. — The government’s accusations were jarring: Several men with militia ties had schemed to abduct Gov. Gretchen Whitmer of Michigan at her vacation home. The group, prosecutors and witnesses said, had held a series of “field training exercises” and discussed killing or stranding her in a boat in the middle of Lake Michigan.

As the trial of four men unfolded over the last month, federal prosecutors presented a barrage of alarming messages and surreptitious recordings that they said revealed the group’s plan to storm Ms. Whitmer’s home, eliminate her security detail and detonate a bridge to slow any police response to the kidnapping. Another man, a former co-defendant who pleaded guilty before the trial, testified that he hoped the kidnapping would touch off a civil war and prevent Joseph R. Biden Jr. from becoming president.

Testimony during the trial, one of the highest-profile domestic terrorism prosecutions in recent memory, has provided a glimpse into increasingly brazen and violent discourse among some on the far right. But the case has also raised questions about when hateful political speech and gun possession cross a line from constitutionally protected acts to crimes.

The men on trial at the federal courthouse in Grand Rapids were among 14 arrested in October of 2020, before there was any attempt to carry out a plan.

When closing arguments begin Friday morning, defense lawyers are expected to assert that there never was any firm plot to abduct Ms. Whitmer, a Democrat, and that their clients, who could face life in prison if convicted, were lured into the discussions by a network of F.B.I. informants and undercover agents. Prosecutors are expected to describe the defendants — Brandon Caserta, Barry Croft, Adam Fox and Daniel Harris — as threats to America’s democratic order who spoke openly about political violence as their frustration with Covid-19 restrictions mounted before the 2020 election. Ms. Whitmer, a first-term governor with a national profile, took a more restrictive approach to the pandemic in 2020 than some other Midwestern governors, keeping many rules in place even when case numbers dropped.

“Which Governor is going to end up dragged off and hung for treason first?” Mr. Croft posted on Facebook in May 2020, according to an F.B.I. agent who examined his account.

Guns and Gun Control in the U.S.

Another F.B.I. agent testified that Mr. Caserta had posted that January about the Second Amendment giving people the right to “kill agents of the government when they become tyrannical.” In May, near the height of the pandemic lockdowns, that F.B.I. agent said Mr. Caserta had posted that it was “about time Americans use” the Second Amendment “for its intended purpose.”

Prosecutors said Mr. Croft, who lived in Delaware, repeatedly traveled to the Midwest for weapons training and meetings during the summer of 2020, including a nighttime “recon” mission to the governor’s vacation home near Elk Rapids, Mich., a rural town about 250 miles northwest of Detroit. Several of the men ended up driving aimlessly down her street because they had written down the wrong address for the house.

On that same trip, an undercover F.B.I. agent who offered to sell the men explosives said he had joined Mr. Fox to scout out the bridge that, according to prosecutors, the men hoped to destroy to prevent the police from reaching Ms. Whitmer’s home after their planned abduction. When the agent spotted another bridge nearby, he testified that Mr. Fox had said they should blow it up, too.

All four defendants face kidnapping conspiracy charges. Mr. Croft, Mr. Fox and Mr. Harris are also accused of plotting to blow up the bridge and are charged with conspiracy to use a weapon of mass destruction.

Federal and state prosecutors charged 14 men as part of their investigation. Two men pleaded guilty to a federal charge and testified before the jury hearing the federal case against the four men. Eight other men were charged in state court.

The disagreement at the heart of the federal case, about when rhetoric becomes a criminal conspiracy, was on display Thursday when Mr. Harris, 24, a Marine Corps veteran, took the witness stand. He was the only defendant to testify on his own behalf during the trial.

Mr. Harris’s lawyer repeatedly asked him whether he had agreed to kidnap the governor. Over and over, Mr. Harris said no.

But when prosecutors confronted him with chat messages about shooting Ms. Whitmer, he acknowledged sending them, including one in which he suggested posing as a pizza delivery driver and killing her when she answered the door.

During a tense cross-examination, Mr. Harris seemed in his own way to distinguish speech from actions from the witness stand on Thursday. Mr. Harris repeatedly used crude language to describe Dan Chappel, a military veteran who contacted law enforcement and became an F.B.I. informant after saying that he had become concerned about social media posts by militia members. Mr. Chappel pretended to befriend Mr. Harris and the other men and at times helped to organize training outings for the group, all while surreptitiously recording their conversations and reporting back to agents.

“Words hurt you? Words scare you?” Mr. Harris said under cross-examination, referring to Mr. Chappel, who had testified earlier in the trial that he feared the group’s anti-government and anti-law enforcement rhetoric would escalate into violence.

Mr. Harris said he considered Mr. Chappel to be the group’s leader.

Several of the men who were charged had been members of the Wolverine Watchmen, a militia group that held training outings and participated in Second Amendment protests, including some at the Michigan Capitol. But prosecutors and defense lawyers have described a blend of overlapping anti-government ideologies among the defendants, including Three Percenter, boogaloo movement and anarchist affiliations.

Mr. Harris testified Thursday that he had long been concerned about an eventual breakdown in civil order. He said that some of his messages displayed in court were about actions he would take after such a breakdown happened, not about a particular plot to kidnap the governor, as prosecutors have suggested. Mr. Harris said he did not consider Ms. Whitmer to be a tyrant but thought she was bad at her job.

Throughout the trial, prosecutors displayed a trove of high-powered rifles and body armor that they said would have been used in the attack on Ms. Whitmer. They also exhibited Hawaiian shirts, which are frequently worn by boogaloo adherents, and the anarchist flag that the F.B.I. seized from the apartment of Mr. Caserta.

In response, defense lawyers have suggested that the prosecution is criminalizing the exercise of First and Second Amendment rights. “The anarchy flag — there’s nothing illegal about hanging political flags, is there?” Michael Hills, an attorney for Mr. Caserta, asked an F.B.I. agent.