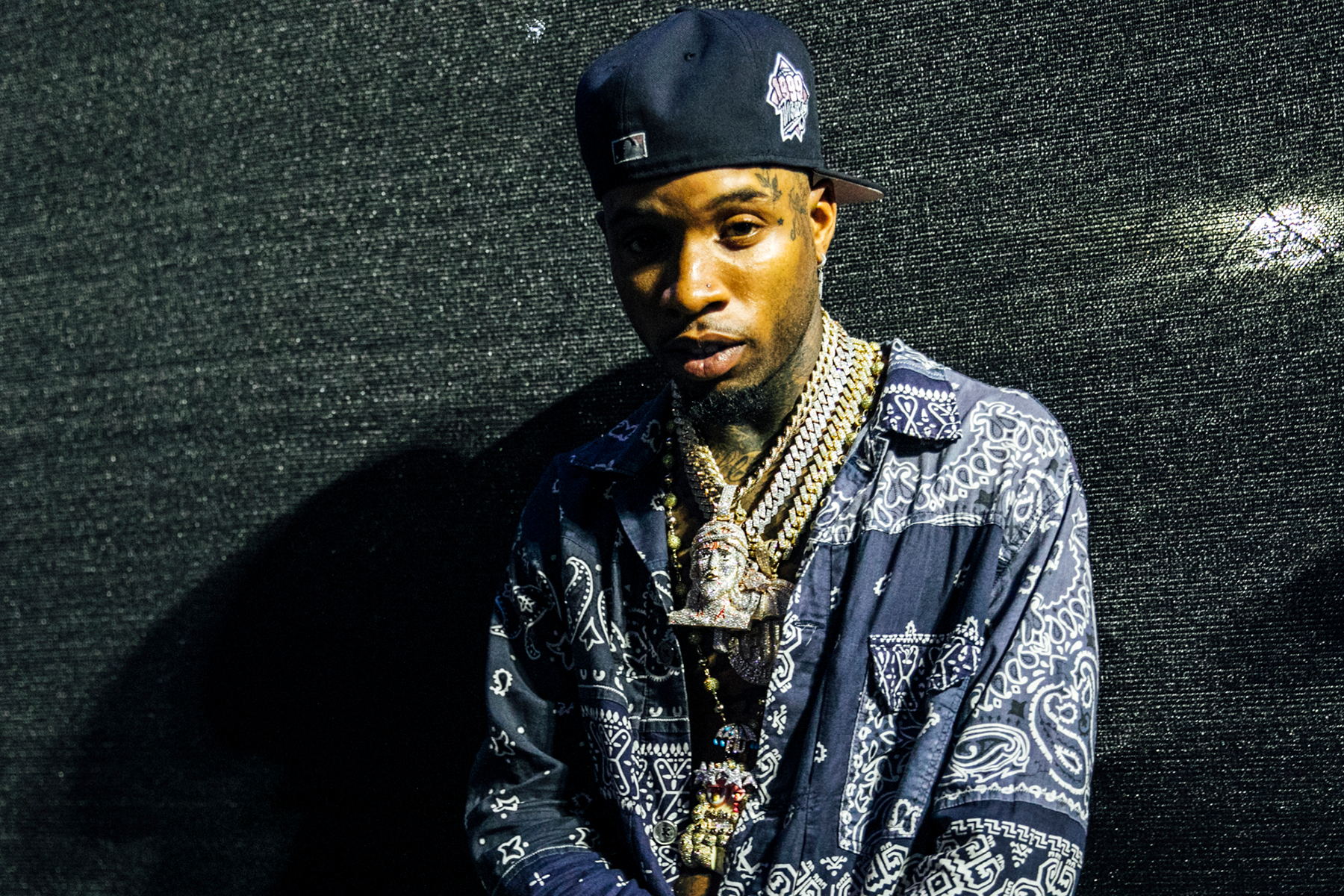 Tory Lanez was handcuffed and remanded into custody in a Los Angeles courtroom Tuesday. A judge found he violated pre-trial protective orders in his felony assault case involving allegations he shot Megan Thee Stallion in her feet during a drunken dispute nearly two years ago.

The “Say It” rapper had a bondsman with him in the courthouse and was expected to gain a speedy release by posting his new bail of $350,000. Judge David Herriford set the new higher bail after hearing nearly an hour of argument and finding that Lanez had violated court orders prohibiting him from contacting or harassing Megan or sharing any discovery in the case.

Lanez, whose legal name is Daystar Peterson, appeared in court wearing a black tuxedo jacket over a black turtleneck. He was accompanied by his father and several friends.

His lawyer, Shawn Holley, argued he did not provide a third-party Twitter user and YouTube personality known as DJ Akademiks with any discovery in the case before Akademiks tweeted Feb. 23 that “Tory Lanez DNA was not found on the weapon in the Meg Thee Stallion case.”

“What he said is incorrect,” Holley told the court, referring to the now-deleted tweet that caused a social media firestorm. “What (DJ Akademiks) said is that the DNA was not found on the weapon. And in fact, the swab of the gun indicates ‘inconclusive,’ that there were four contributors.”

Holley also referred to a follow-up Feb. 23 tweet from DJ Akademiks that read, “I saw this doc myself.. it literally says it was inconclusive in finding Tory DNA on the gun or magazine.” Holley argued that also was false because “the swab of the magazine indicates Mr. Peterson was excluded.”

“If he had seen this document, he presumably would have got it right,” she argued, calling the tweets “chatter” in “a medium that is almost inherently unreliable.”

“The court cannot conclude the defendant distributed anything, however it does appear that he violated the order that prohibits him from making any statements regarding discovery,” Judge Herriford said, referring to follow-up posts from Peterson, including one that read, “Ak is telling no lies.”

Holley argued that Megan also has used her sizable social media presence to talk about the case, and some of her comments have been “damaging” to Peterson. But Deputy District Attorney Kathy Ta argued that Peterson purportedly endorsing the DJ Akademiks DNA tweets was “his way of getting ahead and manipulating the narrative.” She said Megan “been getting death threats” and has been “harassed constantly” due to Peterson’s “course of conduct.”

“The DA requested no bail or, in the alternative, $5 million bail, and the court rejected those arguments and increased bail to $350,000. And that bail is being posted now,” Holley said after the hearing.

“I’m here because this is my son. I’m the first person outside anyone present that day to hear about this. I believe in him. I believe in his innocence,” Peterson’s dad, Sonstar Peterson, tells Rolling Stone.

The high-profile case is now speeding toward a tentative Sept. 14 trial after a prior judge decided at a preliminary hearing in December that prosecutors had enough evidence to warrant calling a jury.

At the December hearing, an LAPD detective testified that Peterson allegedly fired a semiautomatic 9mm handgun at the ground near Megan’s feet, injuring the “Savage” singer, during an argument that followed their departure from a pool party at Kylie Jenner’s house.

Detective Ryan Stogner said he was assigned to the case two days after the shooting and interviewed Megan over the phone on July 16, 2020, and then again on Nov. 12, 2020. He said Megan, whose legal name is Megan Pete, recalled witnessing Peterson pull the trigger.

“As she exited the vehicle, she heard Mr. Peterson yelling obscenities at her, and he stated, ‘Dance, bitch!’ And he then began firing a weapon at her,” Stogner testified.

“(Megan) observed Mr. Peterson holding a firearm, and then she observed him start to shoot,” Stogner said. “Megan immediately felt pain to her feet, observed blood, fell to the ground, and then crawled to an adjacent driveway of a residence…She described her injuries as bleeding profusely.”

Peterson’s high-powered lawyer Shawn Holley grilled Stogner over his interviews with Megan and suggested an alternate narrative where Megan was involved in a physical altercation with her friend and former assistant Kelsey Harris, who was another passenger inside the black Cadillac Escalade, shortly before the shooting.

Holley suggested Harris “had a romantic interest in Tory” and became jealous when Peterson allegedly claimed during the car ride home that he and Pete were in “an intimate relationship.”

Holley went on to suggest that Harris may have had possession of the gun when it fired because investigators found gunshot residue on her hand. The lawyer also said a man who witnessed the shooting from a nearby residence said he believed the muzzle flash was closest to the non-victim female at the time of the shooting.

Under questioning by Deputy District Attorney Kathy Ta, Stogner said gunshot residue can transfer to someone who’s “in the vicinity” of a gun that’s discharged. Stogner also raised questions about the credibility of the eyewitness testimony, saying the man reported seeing two men and a woman physically beating Pete.

“He believed that they were trying to kill her. He said it looked to him to be a severe beating,” Stogner testified. “He had mentioned that it was the two males beating the female on the ground.”

Peterson was taken into custody by officers who responded to a “shots fired” call near the 1800 block of Nichols Canyon Road the morning of the alleged shooting. Booked on suspicion of possessing a concealed firearm in a vehicle, he was released hours later after posting his $35,000 bail.

Pete didn’t publicly identify Peterson as her alleged assailant for weeks but finally named him more than a month later in an Instagram post.

“Tory shot me. You shot me, and you got your publicist and your people going to these blogs, lying and shit,” she said in the video posted Aug. 20, 2020. “Stop lying. Why lie? I don’t understand. I tried to keep the situation off the internet, but you’re dragging it.”

She said, “Even though he shot me, I tried to spare him. And ya’ll motherfuckers is not sparing me. That’s crazy.”

In the immediate aftermath of the shooting, Pete was vague on social media. Stogner testified she initially told responding officers that she cut her feet on glass. She did this because she was worried about how police might react if they knew Peterson, a Black man, had a firearm in the car, she purportedly told Stogner.

“She said that at the time, she was extremely scared and embarrassed, and due to the fact that she was friends with the defendant, she was scared that he was going to get in trouble, and she also expressed some concerns regarding the political climate regarding police and shootings,” he testified. “She was afraid that there had been recent police shootings, and she described her concern about the police possibly shooting the defendant since he had just committed a shooting.”

Peterson, 29, was formally charged on Oct. 8, 2020, with one count of assaulting the Houston-bred performer with a semiautomatic firearm in a manner that “personally inflicted great bodily injury,” and one count of carrying a concealed, loaded, and unregistered firearm in a vehicle.