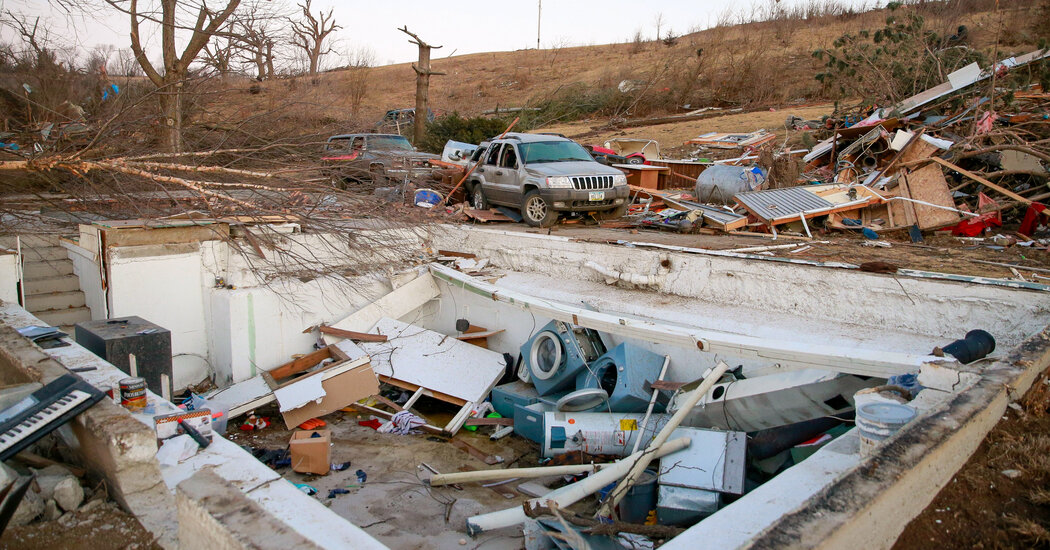 At least seven people were killed, including two children, in Iowa on Saturday as communities across the state were battered by tornadoes, the authorities said.

Six of the deaths occurred in Madison County, and a seventh was reported southeast of Chariton, a city in Lucas County, officials said.

In Madison County, southwest of Des Moines, four adults were injured, three of whom were in serious condition and one who had life-threatening injuries, said Diogenes Ayala, the director of the Madison County Emergency Management Agency.

“The best thing the community can do is just to not go to these areas,” Mr. Ayala said at a news conference late Saturday. “Let people that are living there — let them clean up. Give them some space. This is pretty devastating for our community.”

Gov. Kim Reynolds of Iowa issued a disaster proclamation for Madison County, allowing state resources to be used for response and recovery efforts.

“Our hearts go out to all those affected by the deadly storms that tore through our state today,” Ms. Reynolds said in a statement on Saturday.

Alex Krull, a meteorologist with the National Weather Service in Des Moines, said on Sunday that at least three confirmed tornadoes had moved through the state, and officials were trying to determine if there were even more.

Mr. Krull said tornadoes are typical in the state in April and May, making the storms on Saturday a “somewhat uncommon” occurrence.

The National Weather Service said that a preliminary examination of photos and videos from around Winterset, a city in Madison County, suggested damage from a tornado with wind speeds of more than 135 miles per hour.

The agency’s survey teams were still investigating the damage on Sunday.

The deaths in Madison County — including two children younger than 5 — occurred in different locations. Mr. Ayala did not disclose more details about the deaths because some victims’ families had yet to be notified.

Mr. Ayala estimated on Saturday that 25 to 30 homes had been destroyed but said a fuller assessment would come on Sunday.

Video posted on social media and recorded south of Winterset showed the aftermath of the severe weather: piles of debris, smoke and a car flipped upside down.

Officials in Lucas County did not release details about the death there, also because family members had not been notified.

Another person was seriously injured, a few had minor injuries, and four to six homes in Lucas County were “majorly impacted,” Mike Lamb, the county’s emergency management coordinator, said late on Saturday.

In Polk County, two people were injured and several roads were closed because of severe storm damage, according to the county Sheriff’s Office.

“It’s not an uncommon occurrence,” he added. “But tornadoes of these magnitudes that cause damage are rare, or rarer.”

Several homes in Norwalk, about 10 miles south of Des Moines, were damaged along with the city’s public works site and some businesses, said Shelby Hisel, a city spokeswoman. No injuries had been reported in Norwalk as of Sunday morning.

In July, at least 12 tornadoes barreled across Iowa, with winds in some places reaching 145 m.p.h. and damaging several homes.

On July 19, 2018, 21 tornadoes ripped through the state, including two with wind speeds of 144 m.p.h., according to the Weather Service. Those tornadoes damaged multiple businesses and homes in Marshalltown and Pella, and injured 22 people.