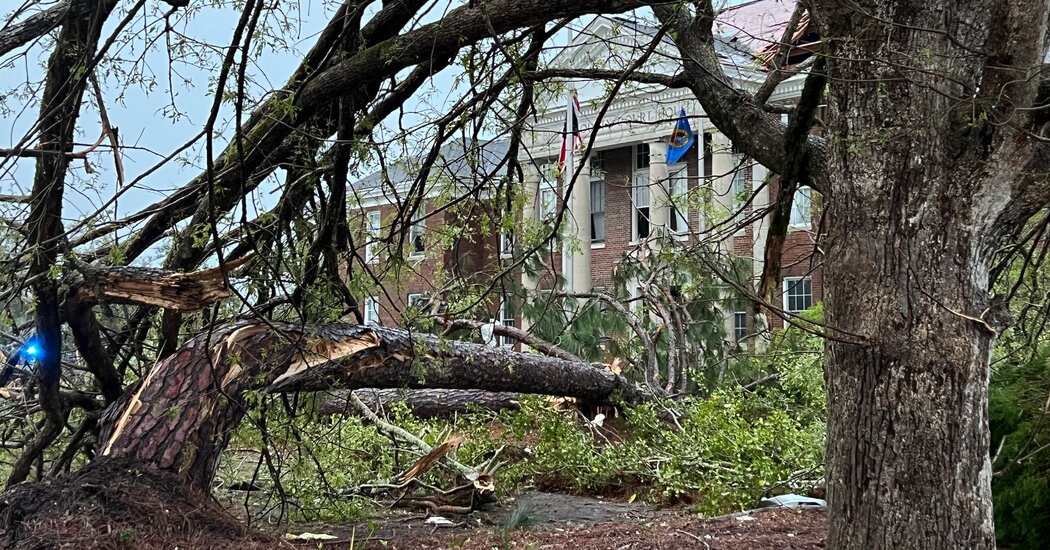 Severe weather continued to rip across the Southeast on Wednesday, a day after a ferocious cycle of storms that was blamed for at least two deaths on Tuesday. Nearly 14 million people were in the path of severe weather that forecasters said could produce more tornadoes.

On Wednesday evening, the National Weather Service issued a tornado watch for parts of Alabama, Georgia, North Carolina and Tennessee, set to last until 10 p.m.

A large section of the region that includes the cities of Atlanta; Birmingham, Ala.; and Chattanooga, Tenn., faced an enhanced risk of severe thunderstorms that the National Weather Service said could create damaging wind gusts and hail.

The threat came a day after more than 40 tornadoes were reported across the South, according to forecasters, who said that higher-than-usual water temperatures in the Gulf of Mexico were likely to contribute to more storm systems.

Some of the areas that were struck by storms on Tuesday were again at risk on Wednesday, extending an onslaught that resulted in a record for confirmed tornadoes in March, Jonathan Porter, the chief meteorologist for AccuWeather, said on Wednesday.

“It’s sort of a one-two punch,” Mr. Porter said. “The ingredients are once again in place for another dangerous afternoon across the Southeast.” He added that he would urge “people to take all warnings seriously.”

In Bryan County, Ga., near Savannah, the coroner confirmed that at least one person had been killed on Tuesday when a tornado is believed to have hit the area, local news outlets reported.

“Please continue to pray with us for all who were impacted by this devastating storm,” Gov. Brian P. Kemp wrote on Twitter on Wednesday, after surveying the damage.

Also on Tuesday, a 71-year-old man in Whitehouse, Texas, about 110 miles southeast of Dallas, was killed when a downburst brought a tree down on his mobile home, the authorities said.

The National Weather Service estimated that downbursts, powerful winds that descend from thunderstorms, reached 100 miles per hour in the area.

“We lost a citizen of Whitehouse, and we’re in mourning over that loss,” Mayor James Wansley said at a news conference on Tuesday.

Active thunderstorms continued to push through central Georgia on Wednesday evening, said Dylan Lusk, a meteorologist with the National Weather Service in Georgia.

“Most of it has kind of turned into a heavy rain and flooding event,” Mr. Lusk said, pointing to a flash flood warning in parts of central Georgia, including the Macon area. He urged people not to try to drive through flooded roadways.

Often, people think, “‘I’ve driven over this road 100 times before, and I know how deep that water is,’” Mr. Lusk said.

But the water may be deeper than expected, or the floods may have washed away part of the road. “That’s how a lot of flash flood deaths actually happen,” he said.

(Here are tips to escape a car during a flood.)

Meteorologists also urge people to have more than one way to receive weather warnings, because downed power lines could cut off television or internet access.

“The No. 1 thing that we have is people not being aware that a warning has been issued,” said John De Block, the warning coordination meteorologist at the National Weather Service in Birmingham. Parts of central Alabama were under a severe thunderstorm watch on Wednesday evening.

In some parts of the Gulf, the water temperature ranged from 77 degrees to 83 degrees, which forecasters said was about four to five degrees above average for this time of year. The dew point, a measure of mugginess, exceeded 70 degrees in the region, further fueling the volatile weather, forecasters said.

In its tornado watch issued Wednesday, the weather service said that gusts of 70 m.p.h. and scattered large hail were possible. In some cases, it said, the hail could be larger than two inches in diameter.

In Georgia, the Macon-Bibb County Emergency Management Agency warned people on Wednesday to identify shelters in their homes or offices.

“These safe rooms should be in the center of the building with as few windows as possible, such as bathrooms or closet,” the agency said on Twitter.