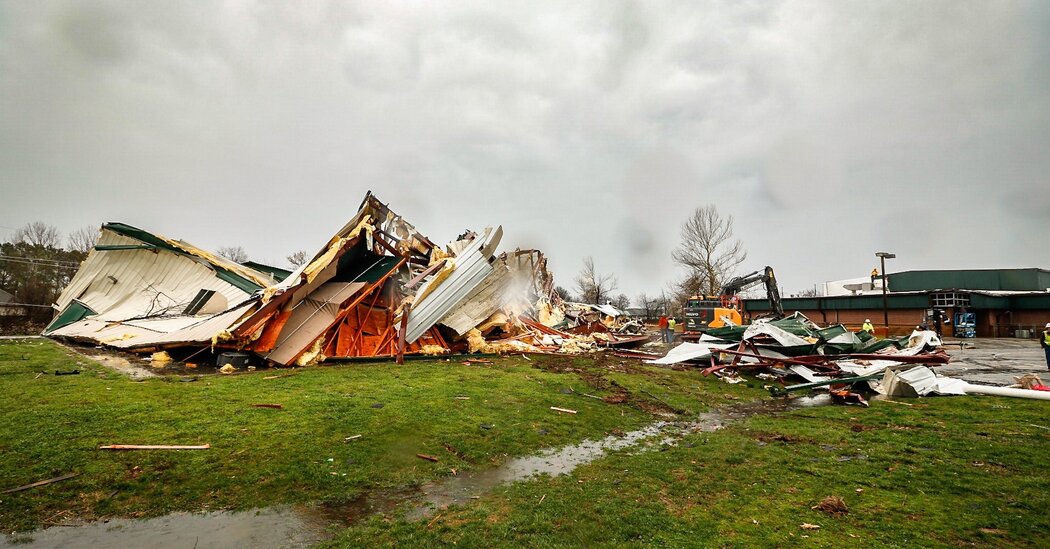 A National Weather Service team that was sent to Springdale, Ark., to confirm the tornado found damage consistent with a category of tornado that can have wind gusts of up to 135 miles per hour, according to Robert Darby, a Weather Service meteorologist in Tulsa, Okla.

“It’s categorized officially as a strong tornado,” Mr. Darby said of the storm’s 2 rating on the enhanced Fujita scale. “These nighttime tornadoes are particularly dangerous when people are asleep and may not receive the warnings,” he added.

Seven people were taken to area hospitals, including two people who were in critical condition, Mayor Doug Sprouse of Springdale said in a statement.

While he was thankful that there were no reported fatalities, he said that “many residents have been displaced from their homes, and numerous businesses have reported significant damages.”

Roads were closed and there were reports of downed trees and power lines, according to the Springdale Police Department. Footage from local news outlets showed roofs peeled off homes and businesses.

The Springdale School District closed schools on Wednesday because of the severe weather and power outages. The district reported significant damage to George Elementary School, in Springdale.

“The gymnasium was destroyed and the kitchen and cafeteria were severely damaged,” the school district said on Facebook.

As the storm system moved east across Arkansas, the Weather Service in Little Rock issued a tornado watch for parts of the state, along with portions of Louisiana, Mississippi, Missouri and Tennessee, noting that several tornadoes were likely.

The Weather Service warned of wind gusts of up to 80 m.p.h. and said that hail as large as a quarter was possible in those areas.

Later Wednesday evening, the Weather Service said a line of severe storms was moving east from Mississippi into Alabama and parts of Tennessee with 60 m.p.h. winds and that there had been at least one report of a small tornado.

In Southaven, Miss., south of Memphis near the Tennessee state line, the Police Department said that a roof had collapsed on a warehouse. The building was evacuated and everyone was safe, the police said.

In Whiteville, Tenn., east of Memphis, the police said they were responding to several reports of tornadoes. No one was said to have been hurt, the police said, but there were reports of downed trees and blocked roads and about 50 people sought shelter in an elementary school.

In central Alabama, residents posted pictures on social media of downed trees and power lines, and the Weather Service office in Birmingham said there had been a “confirmed tornado” in Marion, in Perry County.

Nearly 52,000 customers in Mississippi, 37,000 in Louisiana and 25,000 in Tennessee had lost power as of Wednesday evening, according to PowerOutage.US, a website that aggregates data from utilities. The Arkansas Division of Emergency Management said that Verizon had reported that 40 to 60 sites were down, disrupting service.

A tornado watch had been in effect until 9 p.m. local time for parts of Louisiana including the New Orleans area, which last week was battered by a tornado that killed at least one person and caused heavy damage and power outages. And earlier this month, a tornado was blamed for at least one death in Texas, where a storm system left a trail of destruction as it moved over areas of the Deep South.