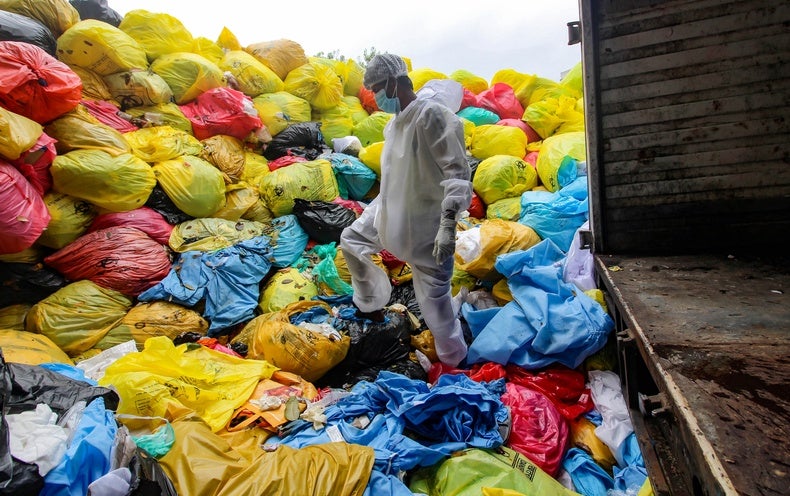 The COVID pandemic is not just a public health crisis. It is also an environmental one. After more than 430 million reported cases of the disease around the world, the pandemic has generated huge amounts of medical garbage in the form of test kits, gloves, masks, syringes and other products that people at clinics and hospitals use once and then toss away.

A recent report by the World Health Organization found the problem was global, but extreme in poorer countries where much of the refuse is simply burned in open pits and decrepit incinerators that lack pollution controls.

According to the WHO’s calculations, 87,000 metric tons of personal protective equipment and other medical products were shipped to countries such as the Democratic Republic of the Congo and Bangladesh between March 2020 and November 2021. Most of that material was used and then tossed away. But the WHO’s estimate only accounts for shipments delivered by the United Nations and its partner groups, not the enormous amounts of material that countries obtain from other sources, according to Ute Pieper, an independent consulting engineer in Berlin, who advises countries on medical waste management issues.

Medical waste was a big problem before COVID. Many health care facilities were not able to manage waste safely before the disease exploded across the planet, and the vast scale of the pandemic has only made a bad problem much worse. “The pandemic is shining a light on the inadequacy of global health care waste management systems that are long due for an overhaul,” says Ruth Stringer, international science and policy coordinator at Health Care Without Harm, an international nongovernmental organization that develops ecological sustainability programs for hospitals and clinics. She served as an adviser for the WHO report.

Ideally most medical waste—related to COVID or otherwise—would be sterilized and then recycled. But for this to happen, the refuse must be split up into its various components, which is a capability that many countries do not have. “One of the biggest problems we face is that the waste is not segregated at the hospital ward,” says Amos Gborie, director of the Division of Environmental and Occupational Health at the National Public Health Institute of Liberia. “So, proper management becomes an issue.”

Bundled waste in Liberia often winds up in small, poorly controlled incinerators that fail to meet international standards, a common situation throughout the developing world. Incinerator emissions are high in toxic pollutants, and the ash itself is also hazardous. Chemicals such as dioxins and furans, which are classified as “likely human carcinogens” by the U.S. Environmental Protection Agency, permeate the plumes. Their levels can be “hundreds of times greater than what is recommended for atmospheric emissions,” Stringer says. “And levels of dioxins and furans, up to 13 times higher than European Union limits, have also been documented in chicken eggs close to medical waste incinerators.” Hens and their eggs will absorb these fat-soluble toxins and concentrate the chemicals in elevated amounts, making eggs hazardous for the people who eat them.

Some countries are now experimenting with ways to segregate medical waste for recycling and safer disposal. Hospitals in Liberia, for instance, have recently begun deploying color-coded disposal bins in an effort to sort the waste. Health Care Without Harm promotes needle-cutting devices that prevent “stick injuries” from syringes. “Without the needle, all vaccination waste, including the vials and packaging, is completely recyclable,” Stringer says. “We can make that waste disappear.” Autoclaves that sterilize medical waste with steam provide further recycling opportunities, and manufacturers can design products with recycling in mind. Masks, for instance, have metal nose clips, polypropylene filters and elastic headbands. Integrated in a single product, these components are not recyclable. But if they can be pulled apart, the pieces can be reused in many ways.

Another important goal, Pieper adds, is to move away from overuse of some protective equipment, especially gloves, which account for a huge share of medical waste worldwide. Health care workers in minimal risk settings, such as people who administer vaccines, often use gloves out of habit or fear of infection, even though “most evidence indicates that the main route of transmission is through exhaled respiratory particles and not fomites [contaminated surfaces],” Pieper says. According to WHO guidelines, gloves may only be necessary when caring for patients sick with COVID.

Beyond minimizing material use and promoting recycling, major environmental benefits “would come from getting rid of the small-scale incinerators,” Pieper says. These devices, situated at small hospitals or clinics, are often made of bricks and other local materials and provide cheap options for waste disposal. But they also break down frequently and spew toxic chemicals into the air. Pieper says putting waste in these incinerators can be “no different than open burning.” To get past this problem, Gborie says his department recently assembled a team that collects waste from health care facilities in Monrovia, Liberia, and then delivers it to a centralized disposal facility. Liberian officials are also starting to collect fees from private hospitals “to pay for managing the waste they generate,” Gborie says.

Stringer welcomes such changes. “Now is the time to focus on creating safe, climate-smart and environmentally sustainable systems,” she says. “We have technical solutions, and what is needed is the resource and political will to put them in place.”