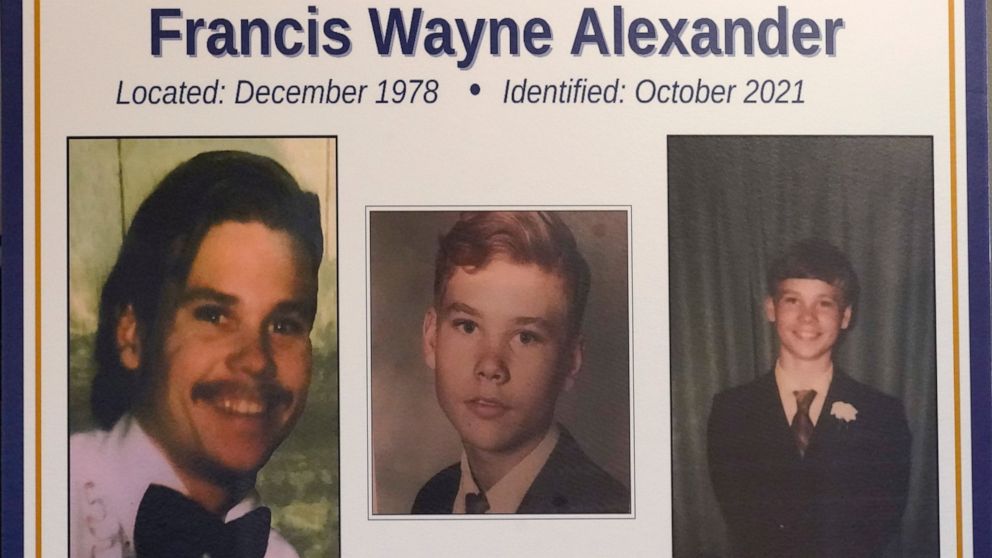 Authorities have identified a victim of serial killer John Wayne Gacy as Francis Wayne Alexander, a North Carolina native who moved to Chicago shortly before disappearing sometime between early 1976 and early 1977

CHICAGO — John Wayne Gacy was convicted of killing 33 young men and boys in the Chicago area in the 1970s. Authorities found most of his victims’ remains in a crawl space under his suburban Chicago house or buried elsewhere on the property. In 2011, they exhumed the remains of eight victims in the hopes of identifying them through DNA testing. On Monday, authorities identified the third of those eight people as Francis Wayne Alexander, a North Carolina native who moved with his family to New York State as a child and then to Chicago shortly before he disappeared. That left the names of five victims still unknown. Here is a timeline of Gacy’s life and the case:

1972-1978: Gacy, a building contractor who works as “Pogo the Clown” at children’s parties, lures young men and boys to his home just outside of Chicago for sex, then strangles them. He stabs one victim.

Dec. 21, 1978: Police executing a search warrant find the first set of victim remains in a crawl space under Gacy’s ranch-style house. Other Gacy victims were also found stashed under the home, buried elsewhere on his property or in waterways south of Chicago.

March 1980: Gacy is convicted of killing 33 young men and boys, which made him one of the most prolific serial killers in U.S. history.

May 10, 1994: Gacy is executed by lethal injection at the Stateville Correctional Center in Joliet.

Oct. 12, 2011: The Cook County Sheriff’s Department announces that it is undertaking a new effort to identify the remains of eight Gacy victims whose names still were not known. The agency says DNA testing that wasn’t available when the remains were found in 1978 could help.

Nov. 29, 2011: The county identifies one of the victims as William George Bundy, a 19-year-old construction worker from Chicago.

July 19, 2017: The county identifies 16-year-old James “Jimmie” Byron Haakenson as another of Gacy’s victims. The teenager had left his Minnesota home in 1976 and was last heard from in August of that year.

Oct. 25, 2021: Authorities identify another victim as Francis Wayne Alexander, a North Carolina native who moved with his family to New York State as a child and then moved to Chicago not long before he vanished. That leaves the names of five victims still unknown.

This story was first published on Oct. 25. It was updated on Oct. 26 to correct that Alexander moved with his family from North Carolina to New York State as a child.