Time Crystals Made of Light Could Soon Escape the Lab 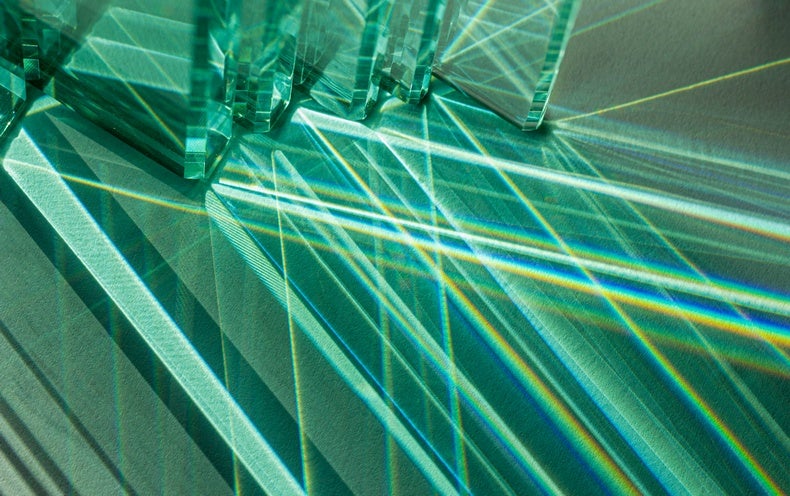 In many respects, scientists are much like detectives, solving mysteries by sifting through evidence in search of cluelike patterns. For example, any crystal, whether a granule of table salt or a diamond necklace, is just a bunch of atoms arranged in a repeating pattern. By glimpsing only a few of the crystal’s patterned atoms, a sleuth may surmise where all the others should be.

But what if that pattern was spread across time rather than space, with the pattern’s constituents related by “when” instead of “where”? This counterintuitive concept is the basis of “time crystals,” quantum systems that exhibit crystal-like predictably repetitive behavior. Massachusetts Institute of Technology physicist and Nobel laureate Frank Wilczek first theorized their existence in 2012. And after years of arduous work, experimentalists only managed to conclusively engineer one into existence in 2021. Now a team of physicists led by engineer Hossein Taheri of the University of California, Riverside, have achieved another advance by making a time crystal out of light. Their work, published in Nature Communications in February, could help time crystals transform from delicate experimental curiosities into more robust components of practical devices.

Although a time crystal’s behavior repeats over time, it cannot be considered a mere ticking clock. Specifically, a clock requires external energy to keep going, but for a time crystal, the “ticking” is its most natural, stable state. This is the opposite of physicists’ idea of thermodynamic equilibrium, in which energy flows into a system only to inevitably dissipate: imagine a pot of water that is brought to a rolling boil and then returned to room temperature. In this sense, time crystals are rather like a pot of water that always boils in the exact same way and never cools down. By some definitions, they thus represent a new and unique state of matter that is distinguished by a steadfast persistence in staying out of equilibrium. As such inherent metronomes, time crystals may be a great future asset to precision timekeeping or quantum information processing.

“Time crystals have gone from being a conceptual idea motivated by highly theoretical considerations to something that people are trying to use for technology,” says Wilczek, who was not involved in the new work. But researchers have had to follow long and thorny paths in the quest to bring time crystals out of the lab and into the realm of real-world applications. Typically, daunting experimental setups or the unique scrutiny of powerful quantum computers have been required to discern whether any given setup constitutes a time crystal at all.

The team’s breakthrough was arguably using a comparatively simpler approach centered on piping twin beams of laser light into a millimeter-wide, disk-shaped crystal cavity. Inside the cavity, the two beams repeatedly ricocheted off of its sides and collided in the process. Crucially, the researchers picked a particular cavity design and precisely controlled the properties of the laser beams so that the salvo of reflected light produced odd patterns that could never emerge from light emitted by, for example, common household light bulbs. Inside its crystalline bounce house, the laser light became a parade of “chunks”, each more like a single wave crest that never loses shape rather than a broad, wide ripple on the surface of a perturbed lake. These so-called solitary waves, or solitons, emerged and formed the parade with a predictable periodicity, marching perfectly on beat, consequently building a time crystal. The physicists caught on to this “crystallization” by carefully studying the light that trickled out of the cavity.

If some tiny version of you stood by the cavity’s exit while holding a light detector, Taheri explains, initially you would detect periodic variations in the outgoing light’s intensity linked to the lasers’ properties. Eventually, however, a light intensity pattern would spontaneously emerge with a starkly different periodicity set by the solitons parading through the cavity. This would be a bit like watching a movie on a television that suddenly began playing it in fast-forward, with the specific frame rate set by some hidden mechanics within the display rather than any setting you controlled. “Now we see some features of the [light] wave that are periodic, but their period is actually twice or three times or some other integer multiple of the periodicity imprinted [on the light] by the lasers,” Taheri says. This increase revealed a quantum system that now naturally kept its own time—in other words, a light-based time crystal.

Andrey Matsko, a physicist at NASA’s Jet Propulsion Laboratory and a co-author of the study likens it to growing salt crystals by suspending a string in salty liquid. “Tuning our lasers is like controlling the structure of the thread you’d put in the [salt] solution,” he says. In either case, the laser or the thread helps crystals form, but their periodicity, their patterning, is fully their own.

Past studies utilized different building blocks for engineering time crystals, yet using light in the new experiment proved to have practical advantages. Importantly, the team’s time crystal operates under relatively normal circumstances. Most quantum phases of matter reveal their special properties only at cryogenic temperatures or other extreme conditions and revert to being very ordinary when they are exposed to the world outside the lab. “From my perspective, this experiment is important because it works at [relatively] high temperatures,” says Berislav Buca, a physicist at the University of Oxford, who did not participate in the study. “This makes it closer to complex processes we see in the real world around us.”

The new time crystal also proved surprisingly resilient against the real world’s notorious messiness. According to Taheri, the system’s random losses of energy, as well as its encroaching noise (a bit like your television heating up and displaying static in the movie-watching analogy), actually boosted its stability. Usually “when these two elements are present, they try to ruin the crystallinity,” he says. To avoid such external perturbations, time crystals typically have to be stringently isolated from their environment. “But our system strikes a balance between these counteracting players,” Taheri says. Igor Lesanovsky, a physicist at the University of Nottingham in England, who was also not involved with the experiment, agrees that keeping a time crystal working without closing it off to its surroundings can be tricky. “You really need a ‘conspiracy’ between different effects,” he says.

Because dissipation and noise conspire to keep each other’s deleterious effects in check, the new light-based time crystal is a promising candidate for integration into practical devices in the future. Making it also requires relatively few components, notes Lute Maleki, CEO of the photonic technology company OEwaves and a co-author of the study. “This is really a simple [device] architecture,” he underscores. “It should be accessible to a lot of [research] groups.” Maleki’s hope is that future research will push this simple but resilient design to the center of both investigations of fundamental physics and applied efforts such as in precision timekeeping.

As a timekeeping device, the light-based time crystal may be slightly less accurate than state-of-the-art atomic clocks. But its stability and unfussy components could make it just right for integration into, for example, communication or computation devices that require very accurate timekeeping while also being rugged enough to function outside a lab’s carefully controlled conditions. Additionally, some common electronics fabrication techniques could possibly enable the time crystal’s implementation on chips, making it easier to add the system to existing consumer gadgets.

Additionally, physicists could study very large time crystals in the same way that more conventional, spatial crystals have been investigated for decades, says study co-author Krzysztof Sacha, a physicist at Jagiellonian University in Poland. Here, physicists could exchange space for time to investigate whether time crystals engineered with certain defects or bathed with excess energy display unexpected behaviors. Such behaviors are typically harder to detect in small crystals, so the ability to make its light-based system large potentially sets up the team for a foray into a fully new realm. “I think that is really opening a new [physics research] horizon,” Sacha underlines. Wilczek agrees. “This is a whole new class of states of matter,” he says. “It is very conceivable to me that, when you examine them, useful devices and other surprises will emerge. It’s virgin territory; we are discovering a new world here.”