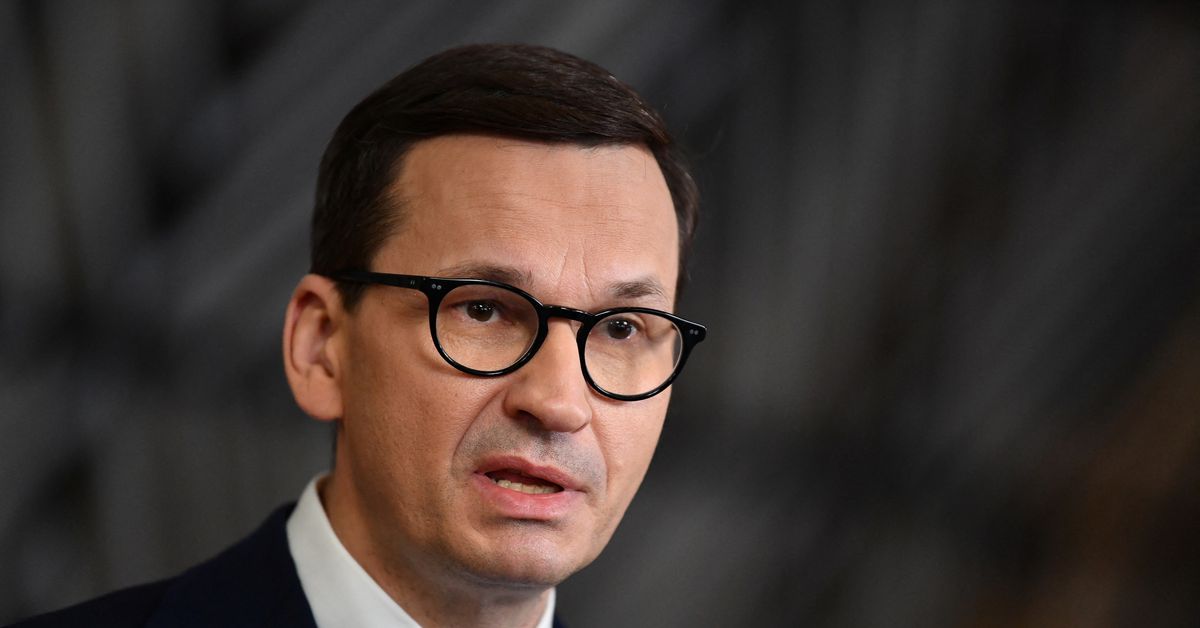 Poland’s Prime Minister Mateusz Morawiecki speaks to press as he arrives for an emergency European Union (EU) summit at The European Council Building, on the situation in Ukraine after Russia launched an invasion in Brussels, Belgium February 24, 2022. John Thys/Pool via REUTERS

PRAGUE/WARSAW, March 15 (Reuters) – The prime ministers of the Czech Republic, Poland and Slovenia arrived in Kyiv on Tuesday in a show of high-level backing for Ukrainian President Volodymyr Zelenskiy, who briefed them on the war with Russia.

The three, who came by train, were the first foreign leaders to visit the capital since Russia invaded last month.

“Your visit to Kyiv at this difficult time for Ukraine is a strong sign of support. We really appreciate it,” Zelenskiy said in an online post.

Brief footage released by his office showed him speaking in Ukrainian and English to Polish Prime Minister Mateusz Morawiecki, Czech counterpart Petr Fiala and Slovenia’s Janez Jansa, who were also due to meet Ukrainian officials.

Also in attendance was Polish Deputy Prime Minister Jaroslaw Kaczynski, leader of the country’s ruling PiS party, who is seen as the main decision-maker in the country.

“It is here, in war-torn Kyiv, that history is being made. It is here, that freedom fights against the world of tyranny. It is here that the future of us all hangs in the balance,” Morawiecki wrote on Twitter.

The Czech Republic and Poland, former communist members of both the EU and NATO, have been among the strongest backers of Ukraine in Europe since the Russian invasion.

Ukrainian Prime Minister Denys Shmygal hailed what he said was the “courage of true friends” and said the leaders would discuss support for Ukraine and further sanctions.

The idea of the trip was agreed at an EU leaders’ summit in Versailles in France last week, Dworczyk said.

But an EU official said there was no “formal mandate” extended by Brussels.

“It’s a very valid initiative. Every initiative to bring peace back to Ukraine is of course welcome,” the official said. “Some leaders might also wonder: will this jeopardize or will this improve conditions for negotiations with the Russians. It remains to be seen, of course. It’s a fine line.”

Russia calls its actions a “special military operation” to “denazify” Ukraine, which Kyiv and its Western allies reject as a pretext for an unjustified and illegal attack.

Reporting by Jan Lopatka in Prague and by Pawel Florkiewicz and Alan Charlish in Warsaw, additional reporting by David Ljunggren;
Editing by Louise Heavens and Grant McCool