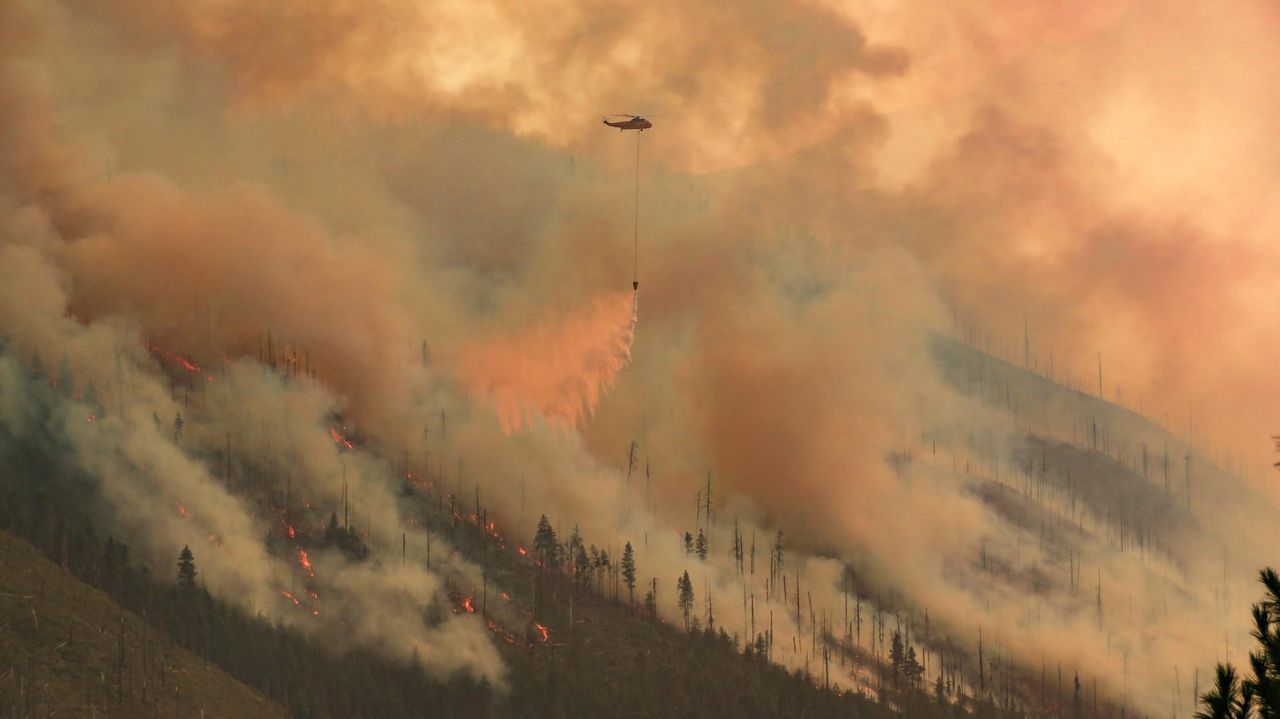 Wildfires continue to burn throughout the state Thursday, covering about 500 square miles and forcing thousands of people to flee their homes.

Damage has been widespread, and at least two people have been killed. As many as 3,000 firefighters are battling the blazes, which numbered nearly 50 on Wednesday and are affecting those living in or near all the state’s major population centers along Interstate 5 — from Medford to Portland.

Gov. Kate Brown has declared a statewide emergency and said Oregon will likely experience the greatest loss of property and lives from wildfires in its history.

Brown has also said the state is experiencing its most extreme fire conditions in three decades. Dry conditions and low relative humidity are widespread Thursday throughout the Willamette Valley and Portland metro area.

Air quality is poor in many places, and power outages abound.

Here is the latest on wildfires burning throughout Oregon. This report will be updated as new information emerges Thursday.

The Santiam and Lionshead fires, which now cover over 260,000 acres, are the state’s largest.

Residents of Gates, a city of 500 near the border of Marion and Linn counties, said their hometown was all but destroyed. The town’s school, as well as the mayor’s house, were leveled.

A Marion County family reported the fires’ first fatalities: a boy and his grandmother.

Thousands have been told to evacuate in southern Oregon as strong winds fed the Almeda fire, which carved a path of destruction through the towns of Talent and Phoenix. The fire also edged into the southern part of Medford on Wednesday.

The fire, which covers 3,000 acres, destroyed hundreds of homes and wiped out businesses in a region home to more than 80,000.

The Medford Mail Tribune reported that Jackson County Sheriff Nate Sickler said the agency had found human remains in the area where the Almeda fire started, and that they were in the early stages of an active criminal investigation.

Jackson County Sheriff’s Office spokesman Mike Moran later confirmed to The Oregonian/OregonLive that deputies were assisting Ashland police with a death investigation tied to the fire. Moran said he did not have any other information about the case.

Sandra Spelliscy, city manager of Talent, with a population of about 6,465, also said she saw breathtaking destruction as she toured the community.

The Riverside fire, which started near the Riverside campground along the Clackamas River, grew to 112,000 acres by Wednesday night as eastern winds pushed the fire to within two miles of Estacada.

The blaze, which now covers nearly 113,000 acres, has destroyed 33 homes and 20 other structures.

Other blazes in the county cover at least 2,500 additional acres.

The entire county is under some level of evacuation warning with about half the county, including the community of Estacada and part of Molalla, under a Level 3 “go now” evacuation order.

A massive wildland fire outside one of Oregon’s largest cities consumed more than 100,000 acres in Lane County on Wednesday, tearing through small towns, forcing thousands to flee their homes and scorching a scenic wonderland beloved by outdoor enthusiasts.

The Holiday Farm fire pushed along Oregon 126 and came within a dozen miles of the Eugene-Springfield area. The blaze decimated the community of Blue River, home to some 800 people.

Two large fires burning in the coastal county, the Echo Mountain fire and the Kinberling fire, together grew to about 1,000 acres Wednesday, officials said. The blazes were driven west by winds of 30 to 50 mph.

An ember ignited a grassfire at the Chinook Winds golf course in the north of Lincoln City as well. Samaritan North Lincoln Hospital, which was at Level 2 “be set to go” orders, was shut down. Officials closed the hospital at 9 a.m. Wednesday and moved its patients to Newport.

A five-alarm fire in rural Washington and Yamhill counties forced the evacuation of as many as 150 homes Tuesday night.

By late in the evening, firefighters established a fire line at Northeast Mountain Top Road. At least three barns caught fire but no homes had burned.

The fire created anxiety for residents of Newberg, the nearest city. It was also close enough to George Fox University that officials sought advice from local law enforcement officials whether they should gear up their evacuation plan.

Officials in Washington County said a separate fire torched as many as 2,000 acres and is so far 50% contained. A smaller fire near Henry Hagg Lake, estimated at about 50 acres, was also 50% contained.

All recreation and public access is temporarily off limits on Mount Hood, as wildfires continue to burn around Oregon’s tallest peak.

The Mount Hood National Forest announced a forestwide closure Tuesday, due to “the threat of unprecedented and dangerous fire conditions,” caused by widespread heat and dryness, and unusually high winds that whipped across the region Monday and Tuesday.

The closure applies to all forms of recreation, including hiking, boating and camping, on all forest lands on Mount Hood. The Willamette National Forest issued a similar forest-wide closure Tuesday. Campgrounds and hiking trails on Mount Hood were evacuated safely, and visitors are currently out of the national forest or making their way out, spokeswoman Heather Ibsen said Wednesday.

— Jim Ryan and The Oregonian/OregonLive staff