‘Think of Groundhogs’: For Life Advice From a Grade Schooler, Press 2 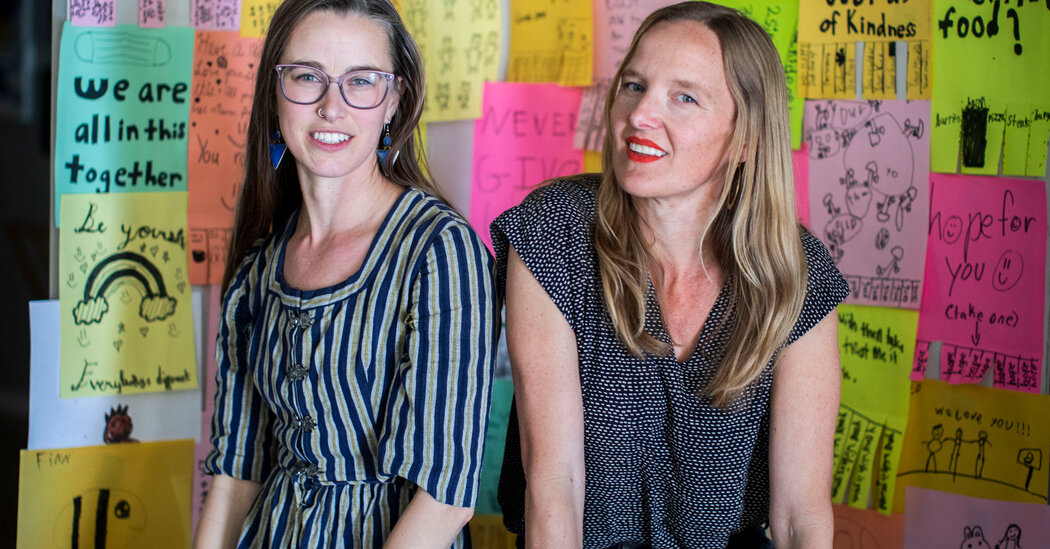 If, for some reason, you happen to find yourself feeling overwhelmed or anxious about matters personal, professional or geopolitical, a new hotline offers advice on how to deal with those big feelings.

“If you’re nervous, go get your wallet and spend it on ice cream and shoes,” a distinctly young-sounding voice enthusiastically advises.

“If you’re frustrated, you can always go to your bedroom, punch your pillow or cry on it. And just go scream outside,” another child says matter-of-factly.

“If you’re mad or frustrated, you can do what you want to do best,” a third suggests, “or you can do flips on the trampoline.”

At various points since it became operational late last month, about 9,000 people an hour were calling PepToc, a hotline dispensing the wit and wisdom of students at West Side School, a small primary school (enrollment: 147) in rural Healdsburg, Calif., about 70 miles north of San Francisco.

“I think we’re a grieving world right now,” said Jessica Martin, a West Side art teacher who created the hotline with Asherah Weiss, a fellow artist and educator.

“The pandemic, the war in Ukraine — it’s all still very raw, and we’ve never had the time to emotionally recover,” Ms. Martin continued. “But to hear the pure joy from kids is extremely comforting.”

After dialing 707-873-7862, callers are presented with a series of options: Those who are feeling “mad, frustrated or nervous” are instructed to press 1. For “words of encouragement and life advice” or “a pep talk from kindergartners,” dial 2 or 3. Press 4 “to hear kids laughing with delight,” or 5 for “encouragement in Spanish.”

Matisse, a fifth grader who advises on the hotline that “if you’re feeling up high and unbalanced, think of groundhogs,” said in an interview that his favorite part of the project was being there for people who were struggling.

“Some people just need help,” he said on Thursday. “And if people are feeling sad, they can just call in and hear a funny thing.”

His favorite option is hearing kids laugh. “When I’m feeling frustrated, it just makes me feel better to hear people laugh,” he said.

The project, which also had a poster component, began when Ms. Martin asked Ms. Weiss to help her put together an art piece that could teach the students about empathy while focusing on the students’ resilient joy through two years of a pandemic and the numerous wildfire evacuations the region has endured.

Throughout a single day, Ms. Martin and Ms. Weiss asked each of their classes, from kindergarten to sixth grade, how they stayed positive. They then asked the students to imagine someone needing a little bit of joy: “What would you say that you think would help someone else?”

The classes’ responses were immediate.

“They just poured themselves out onto the paper and into these recordings because it was light,” Ms. Weiss said in an interview. “They’ve been going through so much in the last couple of years. They get that. They understand that. They know that the opposite of that would be helpful. And giving them a chance to add positivity to the world is a no-brainer for them, I think.”

Some students worked with Ms. Weiss to put together posters and tear-off fliers with positive messages so people could grab love or hope around town.

Other students volunteered for the hotline, which has been in operation since late last month. Ms. Martin lined them up single file outside the classroom and recorded their thoughts with her iPhone. She grouped their responses by theme to create the menu options.

Since the hotline began, it has gotten a steady stream of callers listening to the approximately 25 recordings, Ms. Martin said. But she thought it would receive maybe a thousand calls in a month — not thousands an hour.

Ms. Martin said that most people spend about a minute and 40 seconds on the hotline — enough time to go through two menu options — but some stay on the line for six to seven minutes. There are many repeat callers, she added.

“It’s so precious and sweet to hear the voice of an elementary school student telling you to go scream in a pillow,” Ms. Weiss said. “From that voice, it really hits home, and I think it’s comforting to hear the next generation calling on us to connect and to find ways to heal and to work through our issues.”

Ms. Martin and Ms. Weiss say they were inspired by the artist Susan O’Malley, including her book “Advice From My 80-Year-Old Self: Real Words of Wisdom From People Ages 7 to 88” and her performance art series in which she and a friend gave pep talks in parks.

“This is very much in celebration of her spirit and other artists who have chosen to bring positivity and joy to the world through their art,” Ms. Martin said. “And also to introduce the kids to the idea that art can be a conversation that can introduce positive change in the world.”

Since the response has been so positive, Ms. Martin is hoping the school can secure funding to keep the hotline operating indefinitely.

“But mostly, I hope that the kids take this experience with them forever,” Ms. Martin said.

“And, you know, acknowledge that it’s really actually pretty easy to make a difference in the world and to bring joy to others,” she added. “It just takes one word of encouragement.”