These Vaccines May Be Ready to Take On New COVID Variants 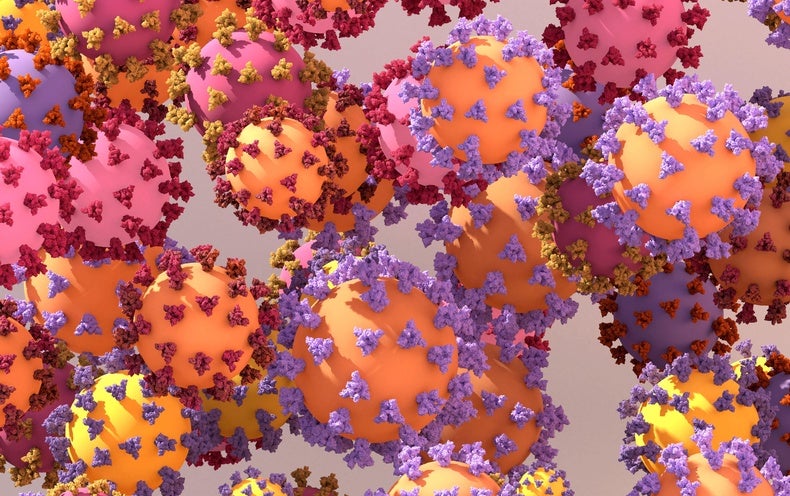 Pfizer aims to have an Omicron-specific COVID-19 vaccine ready by March. Assuming it gains approval, it will mark the first revision of its messenger RNA (mRNA) vaccine Comirnaty since the initial Emergency Use Authorization by the US Food and Drug Administration (FDA) on Dec. 11, 2020. The variant-specific booster will also test the responsiveness of the FDA and other major regulators in showing how quickly they can approve applications for vaccine revisions.

The rapid global spread of the highly transmissible Omicron variant of SARS-CoV-2, despite protection from the first generation of vaccines, demonstrates the sheer unpredictability of the pandemic. As new variants emerge, and existing COVID-19 vaccines lose their efficacy, producers and developers are switching to variant-ready vaccines and boosters. Others are focusing on developing broadly protective vaccines; and yet others have vaccines in development to promote T-cell responses.

But even with the extraordinary speed at which mRNA and DNA vaccines are produced, the fastest turnaround time is several months, lagging behind surges of infections due to new viral variants.“By the time an Omicron variant vaccine could be made, you might have some other variant that has emerged that has a different antigenic profile,” says Rick Malley, chief scientific officer  and scientific founder of vaccine developer Affinivax, who also holds a chair in pediatric infectious diseases at Boston Children’s Hospital. In the absence of effective multivalent vaccines that provide cross-strain protection, there is a risk that chasing variants and providing booster shots will become a default strategy.

Pfizer and Mainz, Germany-based BioNTech began working on an Omicron-specific mRNA vaccine on Nov. 25, 2021 and stated then that, pending regulatory approval, they expected the initial batches to be available about 100 days later in April 2022.  Moderna is operating on a similar timescale. “It definitely makes things easier if you have an approved product,” says Franz-Werner Haas, CEO of CureVac. The Tübingen, Germany-based biotech is itself developing a second-generation mRNA vaccine, CV2CoV, which is optimized for improved expression of an antigen, a substance that stimulates an immune response, after it obtained disappointing clinical data with its first vaccine candidate.

For mRNA vaccine makers planning variant-ready vaccines, development begins with simply changing the sequence of plasmid DNA present in bacteria. Plasmid DNA is used to encode the mRNA that is the basis for the vaccines made by Pfizer and Moderna. The mRNA molecules are designed to mimic their natural counterparts, and contain regulatory elements to protect them from enzymatic degradation and to ensure their stability.

The in vitro transcription step from the plasmid DNA encoding the antigen into mRNA molecules remains unchanged. So too is the formulation step, in which the purified mRNA molecules are packaged into lipid nanoparticles for efficient cellular uptake. “We would typically expect that a different payload would be encapsulated and delivered with our carriers with the same efficiency as the current payload,” says Tom Madden, CEO and founder of Vancouver-based Acuitas Therapeutics, which has designed lipid nanoparticle delivery systems for both the Pfizer– BioNTech vaccine Comirnaty and CureVac’s vaccine programs. “We like to think of it as a FedEx package. It doesn’t matter what you put inside the package, it gets delivered to the address.”

Switching to a new protein-based variant vaccine is an inescapably slower process, given the complexities associated with cultivating at scale the necessary cell lines and purifying the proteins they produce. “The speed of making an mRNA- or DNA-based vaccine will always be greater than when you have to purify a protein,” Malley says. Vaccines that use a virus that serves as a vector—a means to deliver a vaccine into cells—also depend on cell-based production, although the rapid development and initial approval of the chimpanzee-adenovirus-based AstraZeneca–Oxford vaccine Vaxzevria suggests that this modality could also support a relatively quick revision.

Several groups are aiming to develop products that induce cross-strain protection by including portions of the SARS-CoV-2 spike proteins from several variants that are recognized by the immune system and can generate a protective response. Although the development and manufacturing timescales are longer, the unpredictable course of the pandemic—and some limitations for RNA vaccines—have put these options on a more realistic footing than was the case in mid-2021.

“I think everyone agrees that coronavirus isn’t going anywhere soon,” says Helen Horton, chief research officer at London-based Touchlight, which is developing a DNA-based pan-coronavirus vaccine based on its proprietary “doggybone” DNA platform that uses synthetic DNA and enzymes to manufacture mRNA in vitro, an alternative to plasmid DNA. “We already have data in large animal models suggesting that doggybone DNA can get better T-cell and antibody responses with less [drug substance] than plasmid DNA. Inherently, we’re seeing greater immunogenicity,” she says.

The emergence of SARS-CoV-2 immune escape variants that elude vaccine protection is no great surprise —experts anticipated the problem during the early stages of the pandemic. The almost exclusive focus of the first wave of vaccine developers on the spike protein rapidly yielded rich dividends, in terms of effective products becoming available in large volumes within a year of the pandemic’s start. But it also created vulnerabilities, as the ability of the spike protein to mutate and evade neutralizing antibody responses quickly became apparent.

The administration of vaccines and spike-protein-targeting therapeutic monoclonal antibodies exerts a selective pressure on escape variants. In retrospect, the high levels of immunity seen during the initial vaccine rollouts in the first half of 2021 were a transient phenomenon. “We all have to remember protection against hospitalization and death is the name of the game,” says Malley. It is, he adds, “probably no longer realistic” to expect protection against symptomatic disease. Yet the existing vaccines still protect against severe disease. According to recently released data from Washington State’s Department of Health, unvaccinated individuals aged 35 and over are 11 times more likely to experience hospitalization than those who are fully vaccinated; the death rate of older unvaccinated patients (65 years and over) is 15 times higher than that of older vaccinated patients

Cellular immunity, the immune response that involves T-cells and other immune cells but not antibodies, is likely driving much of this protection. But, because evaluating T-cell responses is far more cumbersome than measuring neutralizing antibody titers, supporting evidence is sparse. “The data are highly inferential, and that’s what’s frustrating about the field,” says Andrew Allen, CEO and co-founder of Gritstone Bio. “T cells are obviously very important to viral protection and immunity, but they’re poorly studied, particularly in these large vaccine trials, because it’s hard.”

Spike-protein-based vaccines presumably provoke a response from T cells, as well as antibody-producing B cells. The T-cell targets, or epitopes, within the spike protein may change less from one variant to another than those recognized by antibodies—if the hypothesis that T cells account for the current protection against severe disease and death is correct. Gritstone Bio is targeting a broad array of SARS-CoV-2 proteins in its self-amplifying RNA vaccine, to elicit both an antibody response against the spike protein and a broad cellular response against T-cell epitopes that are not on the spike protein. According to the company’s preliminary genomic analysis, the mutations found within the Omicron variant will have a minimal impact on the T-cell epitopes it had selected for inclusion: about 2 percent of the 146 non-spike protein epitopes are likely to be affected.

“Philosophically, we have to decide how important we think antibodies are,” says Allen. Vaccine makers remain reluctant to dispense with the neutralizing antibody response against spike protein, but the level of protection it offers now appears to be more limited—in terms of both the duration of protection and the breadth of coverage—than that of the cellular response. “No one’s ready to pull the trigger because we haven’t got complete enough data to connect those dots,” says Allen. “It’s rational and reasonable, I think, scientifically.”

Although the emergence of Omicron has added new uncertainties to the COVID crisis, the collective capabilities of the COVID-19 vaccine developers and their myriad manufacturing partners and suppliers have increased dramatically in the past 12 months. Many supply chain bottlenecks that initially hampered vaccine production have eased, although they may never be eliminated completely. “In any complex supply chain, once you fix one bottleneck, you’re simply going to identify the next one—it just moves the supply conundrum to the next limiting item in manufacture,” Madden says.

Vaccine manufacturing, at its current scale of activity, is vast. The industry is estimated to have produced 11.2 billion doses of COVID-19 vaccine in 2021, according to a mid-December report from market analysts Airfinity, and, before Omicron’s emergence, had been gearing up to reach 24 billion doses by mid-2022.

Plasmids are powerful tools but they are limited in the size of the genes they can carry. The company’s novel synthetic “doggybone” vector has potential advantages over plasmid DNA manufacturing because, unlike plasmids, it can contain and transfer long stretches of DNA containing the gene of interest. The versatile gene expression system can be produced rapidly in an in vitro GMP environment. “The ambition for Touchlight, as a company and a technology, is to supplant plasmid DNA as the predominant source of DNA for advanced therapy manufacture,” says chief business officer Tommy Duncan.

CureVac, as well as developing its portfolio of mRNA vaccines, is continuing a collaboration with automaker Tesla to create a transportable mRNA ‘printer’. This consists of a self-contained, automated GMP production environment that integrates plasmid DNA production, mRNA synthesis and lipid nanoparticle formulation, with a yield of about 80,000 doses per week. When ready, it could theoretically be rapidly deployed to contain outbreaks or to cater to isolated, remote populations.

Of course, the circumstances in which these myriad technologies are being developed and tested are never ideal. Just as old generals are always fighting the last war, vaccine developers and public health officials seem to be always fighting the next pandemic—many promising vaccine technologies now in development may still be too early stage to have any impact on COVID-19.  But the progress made in tackling the pandemic has still been substantial in terms of vaccine development and manufacturing. Equitable distribution is very much unfinished business, which makes the case for alternative vaccine technologies that can be deployed locally stronger than ever.

This article is reproduced with permission and was first published on January 19 2022.