These Senators Grilling Judge Jackson Have Ambitions Beyond Senate 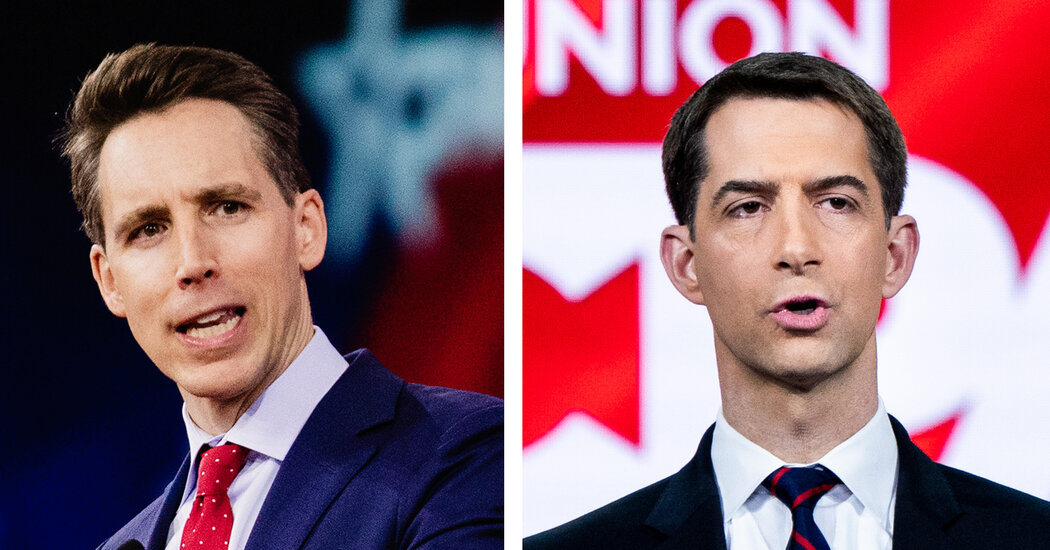 Every senator looks in the mirror and sees a future president, the old saw goes.

So as the Senate Judiciary Committee convenes this week to consider the nomination of Judge Ketanji Brown Jackson for a Supreme Court seat, we’ll be watching the panel not just for probing questions about her judicial philosophy but also for clues to 2024.

Four Republican senators on the committee have flashed signs of larger aspirations, and they share a lot else in common. All are men who are roughly within a decade of one another in age. All have one or two Ivy League degrees. Each has sought to mold the Republican Party in his own image. And all approach these hearings knowing they are just as much onstage as Jackson is.

For the supremely ambitious, a Supreme Court nomination battle is an irresistible opportunity. It’s a chance to build email lists, rustle up campaign cash and impress base voters. Remember how Kamala Harris used the Brett Kavanaugh hearings to preview her 2020 presidential run?

It’s still early to be thinking about the 2024 presidential race, but candidates are already engaged in “shadow jockeying,” said Bob Vander Plaats, an influential Iowa conservative. “Everybody’s waiting to see what Trump does.”

Even so, Republican activists are looking for a champion, said Rachel Bovard, a senior director of policy at the Conservative Partnership Institute. “They want to see that you have a pulse,” she said.

But big hearings can be perilous, too. Senators can’t be seen as “playing for the cameras,” Quin Hillyer, a conservative columnist, told us. More and more Republican voters, he said, want “toughness without histrionics.”

With that in mind, here are the four Republican senators to watch:

Tom Cotton, 44, of Arkansas has two degrees from Harvard and served in Iraq and Afghanistan as an Army Ranger. He’s been an increasingly frequent visitor to Iowa and New Hampshire of late — telltale signs that he has caught the presidential bug.

Cotton is a foreign policy hawk, particularly on China. But he has also staked out hard-right positions on domestic policy, with calls to restrict legal immigration and roll back criminal justice reforms.

In a speech this month, Cotton embraced the Republican Party’s “proud, patriotic and populist” direction under Trump. “We’re the party of the common man, the worker, the farmer, the cop on the beat,” he said. But he broke with Trump over the First Step Act, which he blamed for the early release of “child predators, carjackers and gang members.”

Ted Cruz, 51, of Texas ran for president once before and might again, his allies say. A graduate of Princeton and Harvard Law School, Cruz has been a major force in Republican politics since entering the Senate in 2013.

He has gone through three main phases during his time in Washington. First he was a Tea Partier known for defying Republican leaders over government spending. Then he was a presidential candidate who came in second to Trump in 2016 by running as a conservative true believer. And now he’s a beard-sporting Trump ally who preaches “America First” dogma with the zeal of a convert.

Cruz once took to the national spotlight like a moth to flame. But in recent years, that spotlight has been harsh: His vacation to Cancún during a storm that left millions of Texans without electricity or running water drew withering scorn, and his recent apology to Tucker Carlson, the Fox News host, for calling the Jan. 6 rioters “terrorists” was seen as groveling.

He has been subdued about Jackson’s Supreme Court nomination, calling for her to be treated with “dignity and decorum.” After meeting her in his office last week, he joked on a podcast that he was “highly suspect” of her — for rejecting his offer of Cuban coffee.

Close observers of Cruz say he appears less calculating, more relaxed and more authentically himself than in the past — potentially meaning he has set aside his presidential ambitions or simply that he’s trying out a different approach.

“I think Cruz looks at it as, nobody’s going to beat him to the conservative lane,” said Mike DuHaime, a Republican strategist. “He may not need to pick every single fight.”

Josh Hawley, 42, of Missouri, is an evangelical Christian who promotes traditional values. That puts him on a potential collision course with Cruz and with former Vice President Mike Pence, said Henry Olsen, a senior fellow at the Ethics and Public Policy Center.

Hawley has carved out a significant following on the right by going after tech companies for what he calls their alliance with the “radical left.” And though he has said he’s not running for president in 2024, he hasn’t exactly spurned the speculation, either.

Hawley is an unapologetic supporter of the Jan. 6 protesters. And though he condemned the violence at the Capitol as “horrific,” his campaign has put a photo of himself hailing the Jan. 6 crowd on mugs (“the perfect way to enjoy Coffee, Tea, or Liberal Tears!”). He has raised millions by complaining that Democrats are attempting to “cancel” him. On March 1, he led his speech at the Conservative Political Action Conference by noting his objection to the certification of the Electoral College votes. “I wasn’t backing down then; I haven’t changed my mind now,” he said to raucous applause.

Allies say that Hawley, a Yale Law School graduate who clerked for Chief Justice John Roberts, sees the Supreme Court as his domain. Of the four senators, he’s the only one who has bucked the wishes of Senate Republican leaders by forcefully attacking Jackson’s record. Fact-checkers have found his claims wanting, and the White House called them “toxic.” He likely won’t be able to stop her confirmation. But the fact that Hawley is fighting Jackson’s nomination at all could endear him to Republicans who want a brawler in their corner.

“His goal appears to be to make Ted Cruz look like the statesman of the group,” said Terry Sullivan, a Republican political consultant.

Ben Sasse, 50, of Nebraska is a former university president who has mapped out his own path as a sporadic Trump critic. Sasse has an undergraduate degree from Harvard and a doctorate from Yale. But unlike the other senators, he embraces and even flaunts his intellectual roots.

Sasse wrote his dissertation about “culture-warring entrepreneurs” who seized on the debate over prayer in schools to power Ronald Reagan’s political ascent — an early expression of Sasse’s pox-on-both-houses approach to politics. A lone wolf in the Senate, Sasse often positions himself above what he derides as the “tribal” politics of Washington. In noting Jackson’s nomination, for instance, he said the Judiciary Committee has been “a place of grandstanding and rabid partisanship.”

“Grandstanding” is a word Sasse employs frequently — as when he tangled last week on the Senate floor with Senator Chris Murphy, a Democrat of Connecticut, over aid to Ukraine. The skirmish caught the eye of conservative pundits, who saw it as a sign that Sasse is seeking attention.

But for what? If there’s a lane for Sasse in a coming presidential election, it’s likely as a Never Trumper or an independent. He voted to convict Trump during his second impeachment, a no-no for Republican base voters.

To understand just how rapidly the politics of foreign policy are shifting on the right, look no farther than North Carolina — where being associated with Donald Trump’s views on Russia is now a political problem.

The state is electing a replacement this year for Senator Richard Burr, who is retiring. On the Republican side, the May 17 primary is largely a two-way contest between Pat McCrory, a former governor, and Representative Ted Budd, a far-right lawmaker who was endorsed by Trump.

As the war in Ukraine broke out, McCrory released an ad accusing Budd of being soft on Russia. The ad shows a clip of Budd calling Vladimir Putin “intelligent” — much as Trump praised the Kremlin leader’s aggression as “genius.”

“While Ukrainians bled and died,” a narrator scolds, “Congressman Budd excused their killer.”

In a sign that McCrory’s attack might be landing, Budd’s allies responded with a response ad calling it “a low down, dirty hit job.” The ad quotes Budd as saying, “Putin is evil. He’s an international thug,” and emphasizes his support for Ukraine.

Each side has spent only a few thousand dollars on the ads so far, indicating the goal was to generate free media coverage and not to reach voters directly.

But the exchange underscores how being perceived as an apologist for Putin is suddenly a bad look in a Republican primary thanks to Volodymyr Zelensky, the charismatic president of Ukraine. By presenting an alternate model of strength and machismo, said Rick Tyler, a former Cruz aide, “Zelensky has changed the whole dynamic of the Republican Party.”