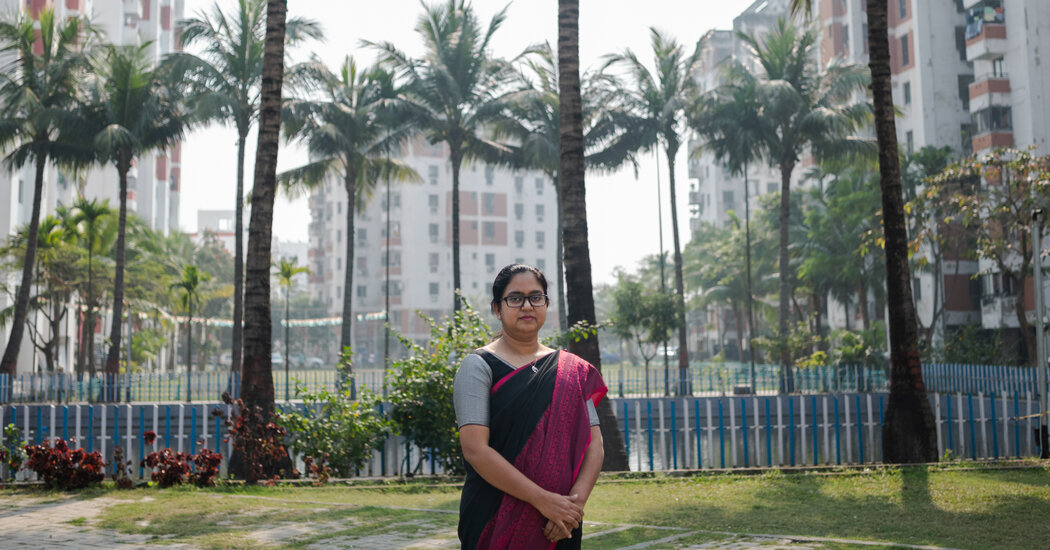 Sometimes, Bruce C. Glavovic feels so proud to be an environmental scientist, studying coastal planning and teaching future researchers, that it moves him to tears.

Other times, he wonders whether any of it has been enough. Scientists have proved beyond doubt that climate change is transforming the planet for the worse. Yet their work has mostly failed to spur governments to address the issue. When all the signs are telling scientists that their research is not being heard, it is tragic, Dr. Glavovic said, that they just keep producing more of it.

“We’ve had 26 Conference of the Parties meetings, for heaven’s sake,” he said, referring to the United Nations global warming summits. More scientific reports, another set of charts. “I mean, seriously, what difference is that going to make?”

It was this frustration that led Dr. Glavovic, 61, a professor at Massey University in New Zealand, and two colleagues to send a jolt recently through the normally cautious, rarefied world of environmental research. In an academic journal, they called on climate scientists to stage a mass walkout, to stop their research until nations take action on global warming.

Predictably, many researchers balked, calling the idea wrongheaded or worse — “a supernova of stupid,” as one put it on Twitter. But the article gets at questions that plenty of climate scientists have asked themselves lately: Is what we’re doing with our lives really making a difference? How can we get elected officials to act on the threats that we’ve so clearly identified? Do we become activists? Would we sacrifice our credibility as academics, our cool composure, by doing so?

Dr. Glavovic says he believes a pause on research would give his fellow researchers a chance to think, really think, about how best to use their skills in the slender window humans have left for altering the planet’s trajectory. “The clock is ticking,” he said.

Climate change has a way of making everyone feel at once very small and bothersomely large — big enough to worsen the problem, too tiny to stop it. Climate scientists devote so much of themselves to the issue that their unease can run deeper.

For scientists of many kinds, the coronavirus pandemic has fueled the sense that scientific experts and political authorities are uneasy allies at best, that distrust and misinformation have weakened society’s capacity to work toward complex collective goals.

These thoughts were percolating as Dr. Glavovic worked alongside nearly 270 other experts on the latest report by the Intergovernmental Panel on Climate Change, the United Nations body that assesses climate research. The new report, all 3,675 pages of it, was issued on Monday and concludes that global warming is outpacing our ability to cope.

Each I.P.C.C. assessment is a huge, multiyear effort by researchers and representatives from 195 governments. Every line, every chart, is fine-tuned to ensure it is backed by evidence. The hours are long; the work is unpaid. The panel, which shared the Nobel Peace Prize in 2007, has given global climate talks a crucial grounding in scientific fact. But its reports deliberately do not prescribe policies for governments to enact. They just lay out the options.

To Dr. Glavovic, the panel’s efforts made clear long ago what the world needs to do. He thinks everybody’s time and energy would be better spent making sure it gets done.

“My involvement with I.P.C.C. has been a defining feature of my life for the last five to six years; I’ve slept, drunk, eaten I.P.C.C.,” Dr. Glavovic said. “It’s been an absolute privilege.”

Still, he has decided not to take part in the panel’s next assessment. And he wants his fellow scientists to join him.

Few seem ready to do so, though many have similarly weak faith in government action. The journal Nature surveyed dozens of scientists who worked on another recent I.P.C.C. report. Sixty percent said they believed the planet would warm in this century by at least 3 degrees Celsius compared with preindustrial times, much more than current international targets. A similar share said they had experienced anxiety, grief or other distress related to climate change.

As the oceans rise, forests burn and carbon dioxide levels continue their upward march, even scientists who do not want to go on strike wonder how much longer they can keep serving as impartial, soft-spoken brokers of data and evidence.

Scientists in any field want their work to have an impact. Most of them are not up against some of the most powerful political and economic forces on the planet.

Like doctors, climate researchers tend to develop “some psychological protection, some form of emotional withdrawal,” said Maria Fernanda Lemos, an I.P.C.C. author in Rio de Janeiro. “Otherwise, it would not be possible to carry out this work.”

For Iain White, a professor of environmental planning at the University of Waikato in New Zealand, a feeling of futility swept over him when he looked up the concentrations of carbon dioxide in the atmosphere at different points in his life.

“I came to the conclusion that it would go up every year until I retired,” Dr. White said. “It was just an incredibly depressing thought.”

Scientists do not talk enough about the emotional toll of researching planetary calamity, he said. “You do hear examples of grief, and people choosing not to have children, and all those kinds of things which you wouldn’t have really thought about 20, 30 years ago, but are now fairly mainstream.”

Timothy F. Smith, 50, a professor of sustainability at the University of the Sunshine Coast in Australia, said he and his colleagues had long wrestled with doubts about their work: “Is it worth continuing if we’re not having the impact that we need?”

And so, in early 2020, Dr. Smith, Dr. White and Dr. Glavovic met up in the seaside town of Tairua, New Zealand. Their plan was to sketch out a joint research project. Instead, they pondered why it was so hard for any research to make a difference. They concluded that withholding that research, and halting I.P.C.C. assessments, was scientists’ best hope for prodding elected officials to act.

When the three professors submitted their call for a walkout to top scientific journals, there were few takers.

“None of us had ever had so many rejections,” Dr. Glavovic said. Eventually, their article was published in the journal Climate and Development.

Dr. Glavovic traces his willingness to take a stand to growing up as a white South African under apartheid, a system he came to detest. In his 20s, he risked jail time by requesting to be a conscientious objector to conscription.

“It’s a very interesting experience to be in the army and everyone else around you is carrying rifles and you’re not,” he said.

The biggest climate case in a decade. The U.S. Supreme Court will hear arguments in a dispute that could restrict or even eliminate the E.P.A.’s authority to control the pollution that is heating the planet. A decision by the court, with its conservative supermajority, could shred President Biden’s climate agenda.

One piece of his argument is easily misunderstood. He is calling for an end to I.P.C.C. assessments not because he believes the panel has failed, but because he thinks it has been a stunning success. It has proved the links between human activity and global warming.

“We’re suggesting a moratorium on the science that simply documents the decline of human well-being and planetary health,” he said. “That science is not contributing to solutions.”

Naomi Oreskes, a Harvard historian of science, agreed that the panel sent a “mixed message” with its assessments. “Every time the I.P.C.C. comes out with yet another report, saying yet again that the science is unequivocal,” she said.

Well, then “why do we need another report?” she said.

Pierre Friedlingstein, a professor at the University of Exeter who worked on previous I.P.C.C. reports, said past assessments had ended with many discussions about how the next one could be better. But only the governments, not the scientists, can make major changes to the way the panel works.

“At the end of the day,” he said, “you end up with a system that looks amazingly similar to what we had before.”

Susan Solomon, an atmospheric chemist who worked on past I.P.C.C. reports, said the science might indeed be settled on climate change and global average temperatures.

“But so what?” she said. “Nobody lives in the global average.”

In the 1980s, Dr. Solomon’s research helped lead to a sweeping agreement to restore the ozone layer. That effort succeeded, she said, because people grasped how the issue affected them personally. Similarly, she said, as scientists improve their understanding of climate change’s local and regional threats, elected leaders will feel more pressure to act.

“There is always more to learn about how to deal with climate change impacts and future risks,” said an I.P.C.C. spokesman, Andrej Mahecic.

Other researchers say high-level action on carbon emissions is not the only point. They say their responsibility is much broader.

In India, “local governments are desperately looking for data and information,” said Aditi Mukherji, an I.P.C.C. author based in Kolkata. They “are looking for scientists to tell them what municipal action can they take,” she said.

Edmond Totin, an I.P.C.C. author in Benin, said few leaders in West Africa considered climate change a burning issue, not compared with education or security. But ordinary people are hungry to know about the changes they are seeing in water supplies, crop yields and fishing patterns.

“I make more impact at the local level than the higher level,” Dr. Totin said. “I don’t even believe I make any change at the global level.” He laughed.

Whenever Debora Ley, an I.P.C.C. author in Guatemala, feels discouraged by the latest grim climate reports, she thinks of the people in villages where she has helped set up small renewable-energy systems.

“The first time they turn on a bulb and see it,” she said. “The excitement in their face.”

But there are hard days, too. “Sometimes, ice cream is the best friend,” Dr. Ley said.

Putting out their call for a strike has led Dr. Glavovic, Dr. Smith and Dr. White to think critically about their remaining working years. Really, that is all they want their fellow scientists to do, too.

“I don’t want to document decline,” Dr. White said. “I want to try and use what little time we have to bring at least a little bit of joy.”