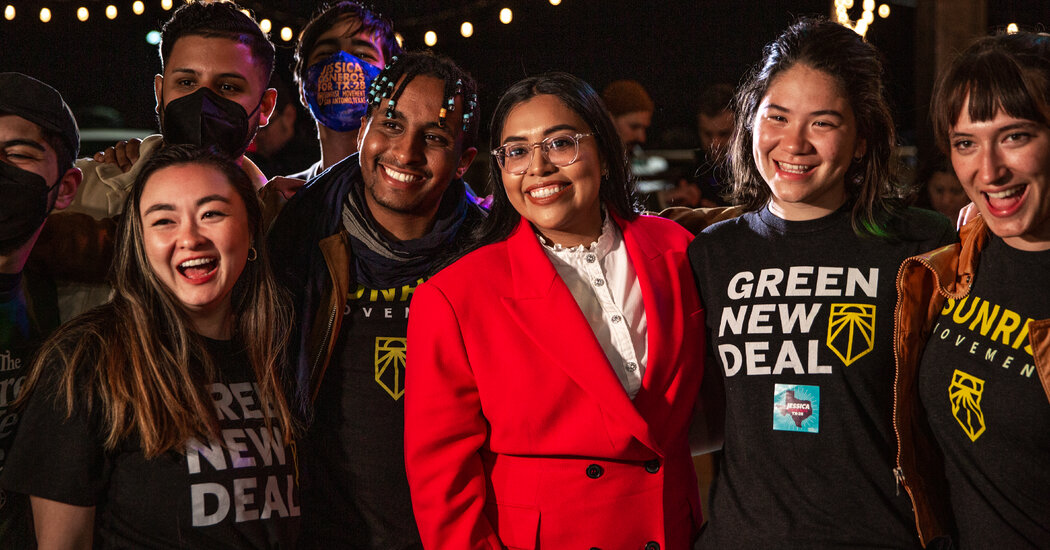 LAREDO, Texas — Just a few years ago, Jessica Cisneros was an intern in Henry Cuellar’s congressional office. Now, the representative’s former intern has forced the nine-term incumbent into a runoff, providing progressives with an opening to oust a powerful moderate Democrat and upend South Texas politics.

The runoff election on May 24 — the same day Ms. Cisneros turns 29 — will be a rematch more than two years in the making. In 2020, she came within 2,700 votes of beating Mr. Cuellar in the Democratic primary. Her father and volunteers drove through the district after she lost, picking up her campaign signs. They held onto many of those signs knowing there might be a sequel. So some of her signs from 2020 are out on the streets again in Laredo in 2022, with the old election date painted over.

“We knew from the very beginning this was going to be a very tough election,” Ms. Cisneros said Wednesday morning, speaking to a crush of reporters who squeezed into her one-room campaign headquarters, a Laredo storefront tucked between a snack stand and Mexican bakery. “We deserve a lot more than what we’re being offered. And I’m really glad that over half of the voters agree that it’s time for new leadership.”

Ms. Cisneros’s success in forcing Mr. Cuellar into a runoff was one of the most striking results of Tuesday’s primary election in Texas, the first of the 2022 midterm season. In Texas primaries, any candidate who finishes below 50 percent faces the No. 2 vote-getter in a runoff. As of Wednesday evening, Mr. Cuellar had won 48.4 percent of the vote, Ms. Cisneros had 46.9 percent and another liberal candidate, Tannya Benavides, had 4.7 percent.

Though she has frequently been compared to Representative Alexandria Ocasio-Cortez of New York — the two campaigned together in San Antonio last month — Ms. Cisneros is no firebrand. While she pushes for many of the same progressive policies as Ms. Ocasio-Cortez, including the Green New Deal and a $15 federal minimum wage, Ms. Cisneros has campaigned heavily on what she describes as more bread-and-butter issues in this border district — jobs and health care.

The results from Tuesday showed the ideological and geographic split among South Texas Democrats.

The congressional district stretches from the edge of San Antonio to Laredo and to rural counties along the southern border. Ms. Cisneros performed best in the northern reaches of the district that are farthest from the border, beating Mr. Cuellar in Bexar County, which includes San Antonio. But she lost to him in Webb County, which includes Laredo, and in the more rural areas closer to the border, including Zapata and Starr Counties. The newly redrawn district lines included more of liberal San Antonio and appeared to help Cisneros.

The politics of South Texas do not fit easily into national norms. Senator Bernie Sanders won several parts of the district in the 2020 Democratic presidential primary. But at the same time, Donald J. Trump dramatically improved his performance with voters in the larger South Texas region in the 2020 general election. That shift has alarmed many Democrats, who warn that Latino voters along the border are increasingly skewing to the right.

Ms. Cisneros has dismissed those views, arguing that the area is seen as conservative largely because Mr. Cuellar helps perpetuate the idea. Mr. Cuellar, in turn, has criticized Ms. Cisneros’ endorsements from political leaders outside Texas, including Ms. Ocasio-Cortez and Senator Elizabeth Warren of Massachusetts.

“South Texas is its own district,” Ms. Cisneros said in an interview in 2019 with The Laredo Morning Times. “We are placed in a very unique spot in terms of politics and also geographically, being right here on the border. But fundamentally I think the big issues are being able to address things like poverty — the rampant poverty that we have here on the border — health care access and the jobs issue.”

Like Mr. Cuellar, Ms. Cisneros is the child of immigrants from Mexico.

Her parents moved to the United States before she was born, after their older daughter needed serious medical care. Her father worked in agriculture and later opened a small trucking company. After growing up in Laredo and graduating as the valedictorian from Early College High School, Ms. Cisneros moved to Austin to attend the University of Texas and went on to law school there, focusing on immigration law.

During the campaign, Ms. Cisneros has frequently referred to her work as an immigration lawyer, citing her efforts helping asylum seekers who were stuck at the border under the Trump administration’s Remain in Mexico policy.

She has frequently relied on immigration to contrast herself with Mr. Cuellar, who has been an outspoken critic of President Biden on the issue. Mr. Cuellar has said the president has been too lax on border security and has not done enough to listen to the views of Border Patrol agents. Ms. Cisneros has said she supports overhauling decades-old laws that make up the immigration and deportation system.

But for all the divisive issues that have helped define her campaign nationally, many voters who supported her were simply focused on a change in leadership, particularly as Mr. Cuellar faces an F.B.I. investigation.

On Tuesday night, Ms. Cisneros and her supporters gathered outdoors behind a Laredo strip mall, cheering each time the vote tally showed her edging out Mr. Cuellar. That lead had eroded by the time she took the stage just after 11 p.m., but the mood hardly dampened. It was unclear at that hour whether she had earned enough votes to force a runoff.

Standing in front of her parents and sisters, Ms. Cisneros assured the crowd, in both English and Spanish, that she was confident she would win. “Tonight, tomorrow or in May,” she said.