The Transfixing Beauty of Starling Murmurations 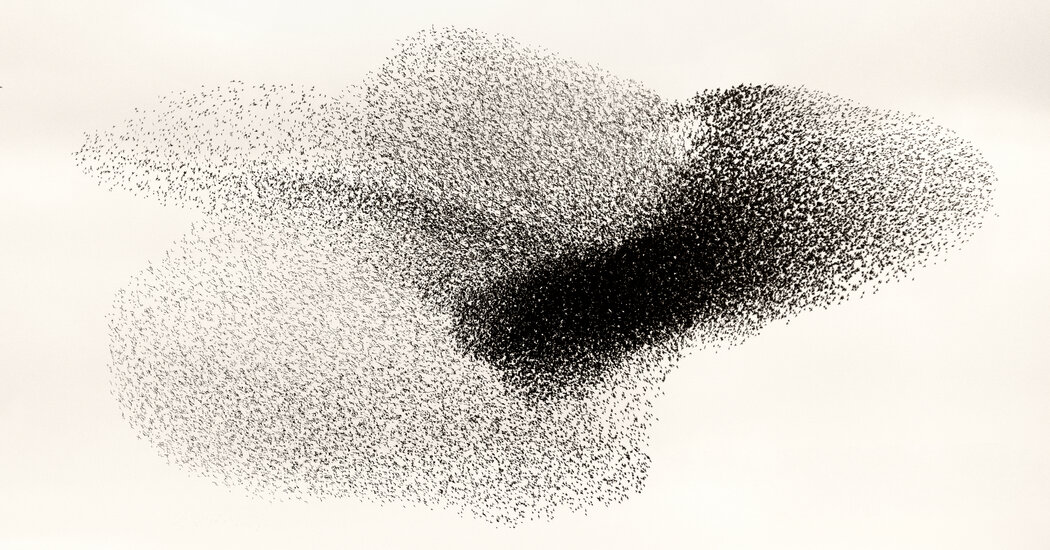 It was a late February evening in 2020, and I was standing in the marshlands of Friesland, a northern province in the Netherlands. Above my head, hundreds of thousands of starlings were swirling, swooping and diving in a dramatic fashion, blackening the sky.

The sound of their wings reverberated through the air, creating wind patterns on the surface of the still water.

The transfixing scene was the climax of three years I’d spent following European starlings along their migration routes across the continent.

My only companion that night was a stranger who’d also stopped to watch the birds — an elder woman who bore witness to the incredible spectacle for close to half an hour.

After the birds had settled into the large reed beds, she turned to me with tears in her eyes. “That was the most beautiful thing I have ever seen in my entire life,” she said.

I had to agree with her.

After a 25-year international career spent photographing many of the world’s most famous musicians and actors, I recently returned to the landscape of my childhood in southern Denmark to photograph a visual phenomenon I first witnessed as a boy.

I began by photographing the large starling murmurations that take place in the northern stretches of the Wadden Sea, a coastal wetland environment — the world’s largest unbroken system of intertidal sand and mud flats, according to its UNESCO World Heritage listing — that stretches from the northern coasts of the Netherlands and Germany to the marshlands of southern Denmark.

Here, each spring and autumn, the skies come to life with the swirling displays of hundreds of thousands of starlings — an event known locally as “sort sol,” or “black sun” — as the birds pass through on their seasonal migrations.

Later, I extended the reach of my photographic investigation to include Rome, England, the Netherlands, Ireland and Catalonia, a region in northeastern Spain.

There is no single definitive explanation for why starlings murmurate, though most scientists theorize that the behavior helps protect the birds from predators. (Another possible explanation is that murmurations can help the starlings keep warm in the evening by recruiting larger roosts.) Moving in tandem as a single large entity both confuses predators and lowers the risk for each individual bird, a phenomenon called the “dilution effect.”

Most of the dramatic performances I witnessed occurred when one or more falcons or hawks were attacking the starling flocks.

What’s more difficult to explain, though, is how the birds are able to move in such proximity, with their movements so tightly coordinated. Studies have found that each starling responds to six or seven of its nearest neighbors, a number that seems to optimize the balance between the cohesion of the group and the effort of the individual.

As is true with the movement of schools of fish and swarms of midges, the movement of starlings shows characteristics of what’s called scale-free behavioral correlation, meaning that a change in the state of a single starling can affect — and be affected by — every other starling in the flock, no matter the flock size.

In creating this series of images, I was inspired by a number of other art forms, including classical landscape painting, calligraphy and Japanese woodblock prints. I was also inspired by the birds themselves.

Travel Trends That Will Define 2022

Looking ahead. As governments across the world loosen coronavirus restrictions, the travel industry hopes this will be the year that travel comes roaring back. Here is what to expect:

Rental cars. Travelers can expect higher prices, and older cars with high mileage, since companies still haven’t been able to expand their fleets. Seeking an alternative? Car-sharing platforms might be a more affordable option.

Cruises. Despite a bumpy start to the year, thanks to Omicron’s surge, demand for cruises remains high. Luxury expedition voyages are particularly appealing right now, because they typically sail on smaller ships and steer away from crowded destinations.

Destinations. Cities are officially back: Travelers are eager to dive into the sights, bites and sounds of a metropolis like Paris or New York. For a more relaxing time, some resorts in the U.S. are pioneering an almost all-inclusive model that takes the guesswork out of planning a vacation.

Experiences. Travel options centered around sexual wellness (think couples retreats and beachfront sessions with intimacy coaches) are growing popular. Trips with an educational bent, meanwhile, are increasingly sought after by families with children.

When starlings move as a single unified organism and assert themselves against the sky, they create a strong visual expression, like that of a calligraphic brush stroke. Lines and shapes emerge within the swarm, bringing to life physical abstractions and calling to mind the patterns formed by interfering waves.

The graphic and organic shapes of the starling murmurations range from meditative to highly dramatic as they perform a breathtaking ballet, one with life-and-death consequences.

At times the flock seems to possess the cohesive power of superfluids, changing shape in an endless flux.

From geometric to organic, from solid to fluid, from material to ethereal, from reality to a dream: This is the moment I attempt to capture — a mere fragment of eternity.

Søren Solkær is a Danish photographer. His most recent book, “Black Sun,” features more than 100 photographs of starling murmurations. You can follow his work on Facebook and Instagram.

Autism Treatment Shifts Away from ‘Fixing’ the Condition