The State of Schools as the Pandemic Wanes 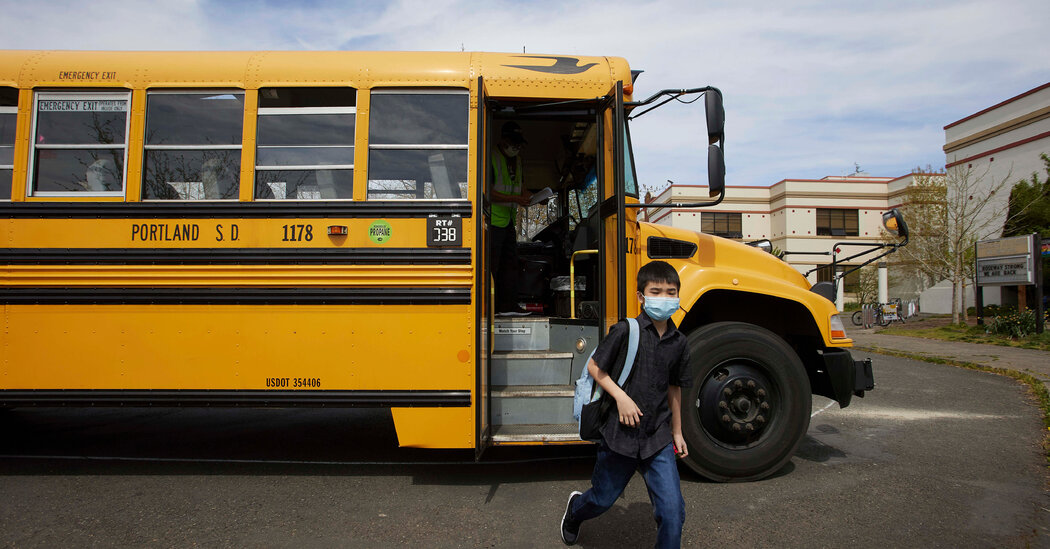 This is the Education Briefing, a weekly update on the most important news in American education. Sign up here to get this newsletter in your inbox.

This week: After a year of remote learning and quarantines, most classrooms have finally reopened. And proms glittered in all their glory, though some restrictions applied.

The state of the school year

Most children in the U.S. began the 2020-21 school year on laptops or other devices at home. Now, nine months later, most children will mark the end of the year in school buildings.

The percentage of districts across the country that remain fully virtual is tiny, roughly 1 percent, according to this tracker from the American Enterprise Institute. Still, many students finished the year (or will soon) spending at least part of the week online. According to the same tracker, only 54 percent of districts currently give students in all grades the option of full-time, in-person instruction.

The technology company Burbio has been running its own school tracker. It monitors 1,200 districts, including the 200 largest. Its data says that in general, conservative-leaning states reopened schools faster than liberal-leaning ones. But Democratic areas had strong variation: The Northeast and the Midwest reopened a lot faster than the West Coast, which has the highest concentration of remote learners.

A substantial number of the nation’s students, though no longer a majority, remained virtual by their parents’ choice. According to federal data, as of March, 34 percent of fourth graders and 40 percent of eighth graders were learning virtually. (The federal survey did not ask about high school students, who are more likely to be in remote classes.)

White students were the least likely of any racial or ethnic group to be learning virtually; Asian American students were the most likely. (Our colleague Jack Healy explains why many of them are reluctant to return.)

Rising vaccinations and falling cases make it likely that school will look more normal in the fall. Many districts have pledged that they will offer full-time, in-person instruction for all students. And several states and districts, including New York City, have said that they plan to restrict fully virtual options.

But in districts that continue to offer remote school, sizable numbers of parents may still choose that option. Similar to this year, those parents are likely to be disproportionately Black, Latino, Asian American and poor.

In Arlington, Va., roughly 5 percent of families overall — but roughly 10 percent of Black and Asian American families and 9 percent of families of English language learners — have opted for virtual learning in the 2021-22 school year. Three-quarters of them cited as their reason either health and safety concerns or that they were waiting for their children to get vaccinated.

If most students do better in in-person school, as many experts believe, districts and public officials have a lot of work to do to convince these parents that school is safe.

Will you go to prom with us?

In a delightful article, our colleague Jill Cowan worked with the photographer Maggie Shannon to capture unfettered glee at four California high schools.

Some students wore custom-made masks, and schools required vaccine cards or coronavirus tests for entry. But seniors still danced in their rhinestone-encrusted heels and three-piece suits, exchanged corsages and curled their eyelashes.

“All high school rituals take on some sort of fraught-ness,” Jill told us. “There’s always drama, there’s always people who get stressed out about how they look. But everyone I talked to was just really happy to be there.”

For Jill, who went with one of her best friends, prom was just a given. But many of these seniors got the green light only a few weeks ago.

“They were coming in after this really, really difficult year,” Jill said, “and they were able to really enjoy it because they know what it feels like to have uncertainty around it.”

“It had been such a long time since we’d all been together,” Komal Sandhu, a senior and her school’s student body president, told Jill. “Seeing everyone dressed up was worth all the stress, all the late nights.”

Michelle Ibarra Simon, a senior in Southern California, had never been to a school dance until prom. When her best friend insisted, she happily caved. “Covid helped me see that I was letting time fly and letting every moment slip through my fingers,” she told Jill. Prom, she added, “was probably one of the best moments of my life.”

We have loved listening to “Odessa,” a four-part documentary series from our audio colleagues about a high school in the Texas city known for “Friday Night Lights.” Over the course of this year, our colleague Annie Brown worked with other members of The Daily to follow the marching band.

“It basically documented how our understanding of the crisis of this year shifted from just a public health crisis to a mental health crisis,” Annie told us.

This Thursday, at 6 p.m. Eastern, Annie and two of the people from Odessa will talk to Michael Barbaro in a live follow-up. Kate will also join them to talk about what schools may look like next year.

Sign up here to get the briefing by email.