The Senate’s Most Vulnerable Democrats 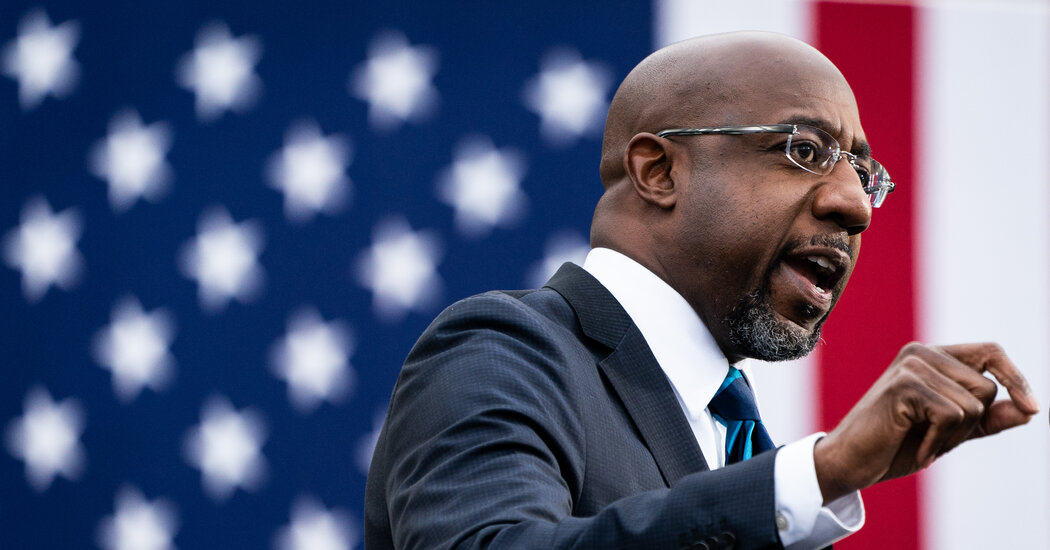 Two senators from states with little in common and at opposite poles of the country found each other this month: Maggie Hassan of New Hampshire and Mark Kelly of Arizona, who banded together to push a gasoline tax holiday.

Their bill — the Gas Prices Relief Act, which would suspend 18.4 cents of federal tax per gallon — soon found two other eager sponsors: Senators Raphael Warnock of Georgia and Catherine Cortez Masto of Nevada.

A gas tax holiday may face dim prospects, but the fact that four of its chief backers just happen to be the four most vulnerable Democratic senators in the midterms this November underscores how much they want to ring a populist bell, one that might help them save their jobs.

While most attention around the midterms until now has focused on the battle for the House and the state-by-state fights over redrawing districts, Democrats’ fragile Senate majority is also in play.

Collectively, the four Democratic senators most at risk — Mr. Warnock, Mr. Kelly, Ms. Cortez Masto and Ms. Hassan — are neither national stars nor senior members of leadership. They are vulnerable not because of policies they passed or failed to pass. Rather, they are incumbents in battleground states in a year of hostile political weather for Democrats, with rising inflation, voter anger at the party in charge and President Biden’s sinking job approval.

Even though the president won all four of their states in 2020, his margins were so slim that small shifts in partisan enthusiasm or the allegiance of swing voters, especially suburbanites, could bring Republican victories.

Mr. Warnock, Georgia’s first Black senator, and Mr. Kelly, a former astronaut, are defending seats in longtime Republican strongholds that Mr. Biden carried by less than one percentage point. Ms. Cortez Masto, the first Latina senator, is seeking re-election in a state where disapproval of the president registered at 52 percent in a recent poll.

Even in New Hampshire, where Mr. Biden won by seven points, Republicans sense an opportunity to oust Ms. Hassan, a former governor, after a recent New Hampshire poll showed that fewer than one in five residents think the country is heading in the right direction.

The 2022 climate could still shift. Galloping inflation could moderate. The confirmation of a Black woman to the Supreme Court, or the court’s gutting of abortion rights, could galvanize Democrats. And with much of the Republican Party captive to Donald Trump’s false claims that the 2020 election was stolen, the Republican nominees who come through bruising primaries could be too polarizing to win. Democrats also hope to pick up Republican-held seats in Pennsylvania and Wisconsin.

But history is not in Democrats’ favor. The party that holds the White House almost always suffers midterm losses. Even milestone legislation — Barack Obama’s health care reform, or Ronald Reagan’s signature tax cuts — has made little difference. Midterm voters have generally been more motivated by economic conditions or by a desire to put a check on the party in power.

A Look Ahead to the 2022 U.S. Midterm Elections

“Individual candidates and the races they run do matter, but history tells us the political environment is the most meaningful contributor to the midterm outcome,” said Kyle Kondik, an analyst at the nonpartisan Center for Politics at the University of Virginia.

Here is a look at Democrats’ most endangered senators.

Georgia: The pastor and the ex-football star

Mr. Warnock calls himself “the most vulnerable Senate Democrat up for re-election.” He won his seat in a 2021 runoff thanks to strong Black turnout and the failure of some Republicans to show up after Mr. Trump fanned the falsehood of rigged elections.

But Georgia is still a right-leaning state, and disenchantment with Mr. Biden is more intense there than nationally. The president’s job approval was in the mid-30s in two public polls last month. While Mr. Warnock has emphasized how Democrats’ Senate majority delivered pandemic relief, his opponents have attacked his reliance on wealthy, out-of-state campaign contributors.

“Biden has lost those white, highly educated voters who migrated to Warnock and are open to coming back to Republicans,” said Brian Robinson, a G.O.P. strategist in Georgia.

A poll by The Atlanta Journal-Constitution showed Mr. Warnock statistically tied in a general-election matchup with the former football star Herschel Walker, who was beckoned into the race by Mr. Trump. Women have claimed Mr. Walker threatened them with violence, and he has acknowledged a history of mental illness. But his stature with Republicans has suffered little.

Mr. Walker has avoided public events and generally all but friendly news media. In one interview, he said the Democrats’ proposed John Lewis Voting Rights Act “doesn’t fit with what John Lewis stood for,” though the Georgia congressman, who died in 2020, had dedicated his life to voting rights. Mr. Walker later complained it was “totally unfair to someone like myself” to be asked about the bipartisan, trillion-dollar infrastructure law, perhaps Congress’s biggest achievement of 2021.

At some point, Mr. Walker may have to face off with Mr. Warnock, an orator who holds the pulpit that once belonged to the Rev. Dr. Martin Luther King Jr.

Jason Carter, the Democratic nominee for Georgia governor in 2014, said, “I have in my office right now a football signed by Herschel Walker, but I don’t want him to be my senator and I’m not alone.”

Arizona: Drawing a contrast with progressives

Mr. Kelly is defending the seat he won in 2020, where he outperformed Mr. Biden in all 15 counties. The race is taking place in the shadow of a yearlong right-wing crusade in Arizona to undo Mr. Biden’s victory, which has turned off many traditional Republicans.

Among the Republican contenders, Attorney General Mark Brnovich acknowledged that Mr. Trump lost in Arizona, but he has tried to regain credibility with the base ever since. The Republican field also includes the venture capitalist Blake Masters, who has appealed to grass-roots anger at China and over the porous Mexican border, and Jim Lamon, a businessman who has run inflammatory TV ads.

“You’ve got Republican candidates doing everything they can to out-Trump themselves in a state that defeated Trump,” said Tony Cani, a Democratic strategist.

Mr. Kelly has held his attacks against Republicans so far, instead emphasizing his roots as the son of two police officers and his support for popular legislation like the gas tax holiday and a ban on congressional stock trading.

Kirk Adams, a Republican strategist, said the G.O.P.’s often fractious wings in Arizona would rally around the eventual nominee.

“There is a unifying thread right now, the alarm and concern over the Biden administration, across all factions of the Republican Party,” said Mr. Adams, a former top aide to Gov. Doug Ducey, whom anti-Trump Republicans have tried to coax into the race.

Mr. Kelly, the husband of Gabrielle Giffords, the former congresswoman who was critically injured in a mass shooting in 2011, has sought to insulate himself by drawing a contrast with progressives. He criticized Mr. Biden for not labeling the record number of migrants seized at the border “a crisis,” and he disavowed the state Democratic Party’s censure of Senator Kyrsten Sinema for refusing to change filibuster rules.

Nevada: A fight over who would fight harder

A war of words over Mr. Trump’s loss in 2020 is likely to animate the Senate race in Nevada, where the leading Republican, Adam Laxalt, has pushed efforts to reverse Mr. Biden’s 33,000-vote win in the state. He has called the falsehood of a stolen election “the hottest topic” of his campaign this year. He has the backing of both Mr. Trump and Senator Mitch McConnell of Kentucky, the minority leader.

Ms. Cortez Masto, first elected in 2016, was a protégé of Harry Reid, the Senate majority leader who died last year.

“I’ve always been in tough races,” Ms. Cortez Masto said in an interview. “I know that Mitch McConnell will continue to put millions of dollars into this race.”

Mr. Laxalt has accused Ms. Cortez Masto of failing to stick up for the police and denounce violent crime. “Vegas can’t survive if violence continues to increase,” he said at a rally this month. “We’re a tourism economy. People are scared to come here.”

Ms. Cortez Masto, who says she helped deliver Justice Department grants to local police departments, is trying to localize her race, promoting her procurement of funding to combat wildfires and drought in the infrastructure law, which Mr. Laxalt opposed.

“Let me tell you, there’s a stark difference between me and Adam Laxalt,” Ms. Cortez Masto said. “Every day I’m talking to Nevadans, hearing what they need and fighting for them.”

Ms. Hassan, who won her Senate seat by a mere 1,000 votes in 2016, seemed to catch a big break when the most popular official in the state, Gov. Chris Sununu, told fellow Republicans he wouldn’t run for Senate.

But voters’ disapproval of Ms. Hassan, which has reached 51 percent, drew a second tier of Republicans off the sidelines, including Chuck Morse, the State Senate president, and Kevin Smith, the town manager of Londonderry. They joined Don Bolduc, a retired Army general.

Ms. Hassan, who was twice elected governor, has $5.3 million in her campaign account, far ahead of rivals.

Her campaign boasts that she was one of the original bipartisan negotiators of the infrastructure deal and secured funding for two state priorities, coastal resiliency and high-speed internet (many New Hampshirites work from home). Yet, Republicans point to New Hampshire’s receiving the fewest highway dollars of any state.

“I would say there’s zero chance, barring a disaster in our primary — which is always possible — that she could get re-elected,” said David Carney, a Republican strategist who is advising Mr. Morse.

The soaring cost of fuel, in a state with no mass transit and where most homes are heated with fuel oil, is one factor driving voters’ pessimism about the country’s direction. On the other hand, a Supreme Court ruling undermining Roe v. Wade this year could infuriate New Hampshire voters, among the most supportive in the country of abortion rights.

Ms. Hassan has won three statewide races, including re-election as governor in 2014, a brutal midterm for Democrats. “President Obama was not popular in New Hampshire in 2014,” said Ray Buckley, the chairman of the state’s Democrats. “She was able to win.”