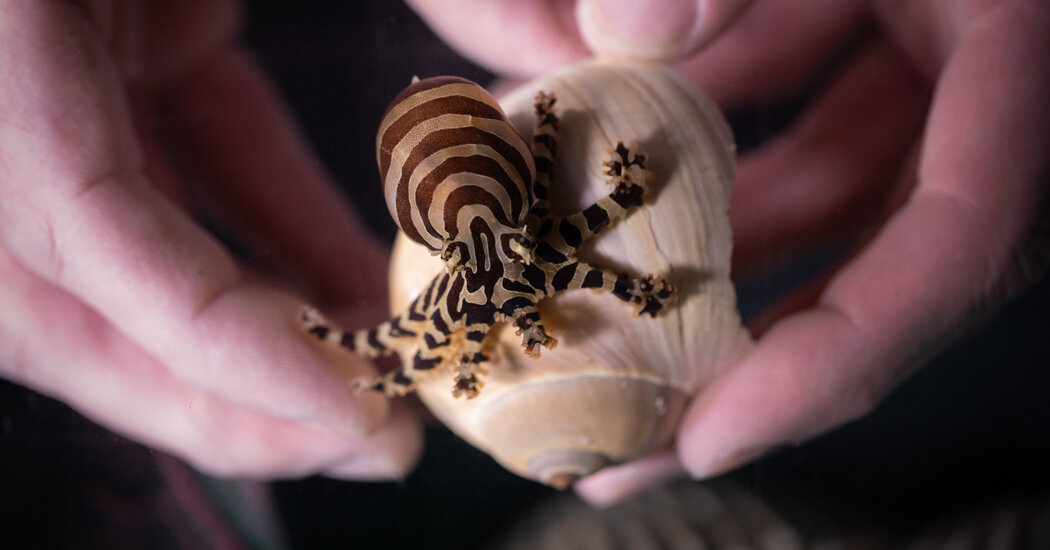 Roy Caldwell, a behavioral ecologist at the University of California, Berkeley, first met Octopus chierchiae, also called the lesser Pacific striped octopus, in the mid-1970s in Panama. He was pulling rocks from the ocean to find mantis shrimp hiding in cracks. “Every once in a while, these cute little striped octopus would come out,” he said.

He brought a few of the octopuses back to Berkeley. Soon after, “One of the females laid eggs, and I thought that was kind of a bummer because I knew that she would die,” Dr. Caldwell said. “And she didn’t die.” A couple of months later, she laid eggs again.

A 1984 paper by Arcadio Rodaniche, a Panamanian scientist, confirmed Dr. Caldwell’s observation: Females of this species, unlike nearly every other octopus, could reproduce several times.

This trait, combined with their convenient size, made them an enticing subject for lab research. Unfortunately, Dr. Caldwell couldn’t find any more in Panama. None of the biologists or collectors he asked had seen any, either.

The little cephalopod was only a memory until around 2010, when “I got an email from a high school student,” Dr. Caldwell said, “who wanted to know how he could take care of his new pet octopus.” The student sent a photo. The octopus’s zebra stripes were unmistakable.

Dr. Caldwell traced the octopus back to a collector in Nicaragua. Finally, he could obtain a few lesser Pacific striped octopuses and try to get a colony going in his lab. But over three or four years of attempts, he never got past the second generation. After that, Dr. Caldwell said, the females’ eggs didn’t hatch. He suspected inbreeding was a problem, as well as diet. “We didn’t know quite what to feed them.”

That question was still unanswered in 2016, when Dr. Rosenthal came to the Marine Biological Laboratory with a dream of making model cephalopods to aid scientific research. He recruited Mr. Grasse, who was known as something of a cephalopod whisperer, from the Monterey Bay Aquarium in California. Taylor Sakmar, also a Monterey Bay aquarist, came to Cape Cod to help build a new kind of facility for many-armed animals.