The ‘Reid Machine’ Rolls On 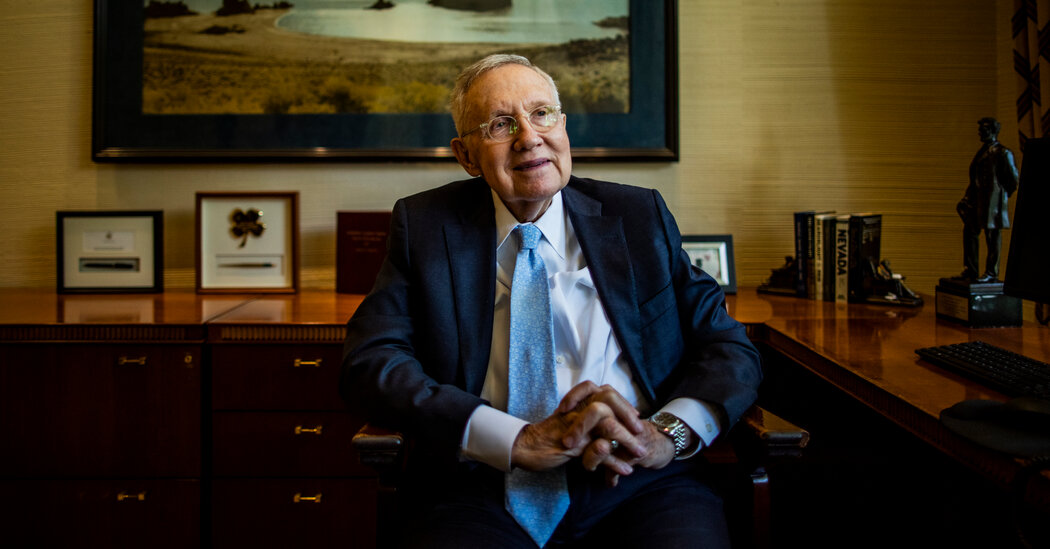 WASHINGTON — Harry Reid was always a force in the Senate during his long run in the Democratic leadership, but no one expected him to remain a Capitol Hill powerhouse long after he was gone.

Yet when Senate Democrats finally get down to business this week with their expanded majority, one thing that is clear is the debt of gratitude they owe to the pugilistic former Senate majority leader from Nevada who retired in 2016 and died just over a year ago.

Not only did former top aides of Mr. Reid help engineer crucial Democratic Senate wins in Pennsylvania and Nevada that allowed the party to keep its majority, but alumni of the Reid academy of politics and policy are now holding down top jobs throughout the chamber, the administration and the party apparatus. The Reid Machine, a term embraced with affection by Democrats, is far from shut down.

“Harry Reid’s influence lives on,” said Senator Chuck Schumer, the New York Democrat and majority leader and a bit of a Reid protégé himself. “He had many great staffers who learned so much at his side and now they are having a strong influence on America policy and politics.”

Reid alumni say it is not just happenstance that so many of them have been part of winning tough races or moved into top Senate jobs. At least four are now chiefs of staff to senators and others hold influential party positions, including Kristen Orthman, a former top adviser to Mr. Reid (and Senator Elizabeth Warren of Massachusetts) who is the communications director for the Democratic National Committee.

They say they learned resilience and more from a man who was often counted out but somehow managed to survive, such as in 2010 when the Tea Party-backed Republican Sharron Angle was supposed to finish him off but came up short. Members of the Reid network say he passed on the toughness and political smarts he accumulated during his rise from poverty in tiny Searchlight, Nev., to real power in Washington. Mr. Reid was a take-no-prisoners politician who never backed down from a fight and instigated more than a few — perhaps a legacy of his days as a boxer.

“He instilled that good offense is good defense, to defend every blade of grass, and to be relentless,” said Rebecca Lambe, Mr. Reid’s longtime right hand in Nevada and political adviser to the campaign of Senator Catherine Cortez Masto, the Democratic incumbent Republicans believed was cooked but who ended up pulling off a win last November. “It doesn’t matter where the ball goes on the field, you defend it. And he always believed in playing the long game.”

The Nevada victory was particularly sweet for the Reid operatives: It was on his home turf, in support of the person he had tapped as his successor. Her challenger was Adam Laxalt, the grandson of Paul Laxalt, the former Republican governor and senator who defeated Mr. Reid, then a lieutenant governor, in his first try for the Senate in 1974. The Nevada victory also guaranteed that Democrats would hold the Senate no matter the outcome in the Georgia runoff, which later expanded the Senate majority from 50-50 to 51-49.

On top of that, Mr. Laxalt was a favorite of Mr. Reid’s old Senate nemesis, Senator Mitch McConnell of Kentucky, the Republican leader, and was being helped by a circle of former McConnell aides.

The 118th Congress is underway, with Republicans controlling the House and Democrats holding the Senate.

Ms. Lambe and other Democrats like to point out that the Republican forces celebrated prematurely, claiming they had nailed down Nevada even as the extended vote count slowly put Ms. Cortez Masto over the top. Ms. Lambe said Republicans underappreciated the strength of the ground operation and the quality of the party organization Mr. Reid had assembled over the years.

“They were running around the country saying they had won, they had beaten the Reid Machine,” Ms. Lambe said of her Republican adversaries. “We snatched victory from them.”

Nevada wasn’t the only tough Senate win with Reid connections. In Pennsylvania, Rebecca Katz, another former top Reid hand, was the chief strategist in a race that saw Democrats turn over a seat held by Republicans. The victory by John Fetterman was critical to  the Democratic majority in a cycle that typically tilts against the party holding the White House. Adam Jentleson, another former top Reid aide, served as an informal adviser to the Fetterman campaign and is now Mr. Fetterman’s Senate chief of staff.

“I thought this election would have really meant a lot to him,” said Ms. Katz, now playing a senior role in the campaign of Representative Ruben Gallego, the Arizona Democrat who announced Monday he would seek his state’s Senate seat in 2024. “For Democrats to not only not lose a seat, but to flip a seat and to have won Nevada in a nonpresidential year, he would have been so proud.”

Ms. Katz said that Mr. Reid fostered a working environment that she found different from other Senate offices.

“He was very comfortable in his own skin,” she said. “There are so many offices that had this toxic energy but Reid always had strong women and a lot of good people around and we all wanted each other to succeed.”

Mr. Jentleson noted that the most valuable experience to be gained from being on Mr. Reid’s staff was just watching him work at close range.

“It was the combination of audacity and relentlessness that he brought to everything he did,” said Mr. Jentleson. “That was what a lot of folks who worked with him took away from the experience. He was constantly thinking about every angle where he could gain an advantage.”

Mr. Jentleson recalled that Mr. Reid, while known for being occasionally terse, could sometimes drop “pearls of wisdom.”

“I remember one time I was really, really upset about something,” recalled Mr. Jentleson, “and he said in a really calm voice, ‘Don’t get mad, get even.’”

Besides Mr. Jentleson, other Senate Democratic chiefs of staff with Reid roots include Neil Kornze with Senator Michael Bennet of Colorado; Rey Benitez with Senator Jon Ossoff of Georgia; and David Montes with Senator Alex Padilla of California.

But Mr. Reid’s reach extends beyond Capitol Hill. He was a longtime proponent of giving Nevada a bigger role in the presidential primary system, a long-game push that paid off in December when Democrats awarded the state the No. 2 position in the primary season along with New Hampshire, at the urging of President Biden.

“You can see his fingerprints everywhere,” said Ms. Lambe.

Mr. Schumer, who took over from Mr. Reid after years at his side in the leadership, said he still mentally consults Mr. Reid as a political guide.

“I also still feel Harry’s influence,” he said. “I often think, ‘What would Harry say?’”