The Quest for a ‘Tick Map’ 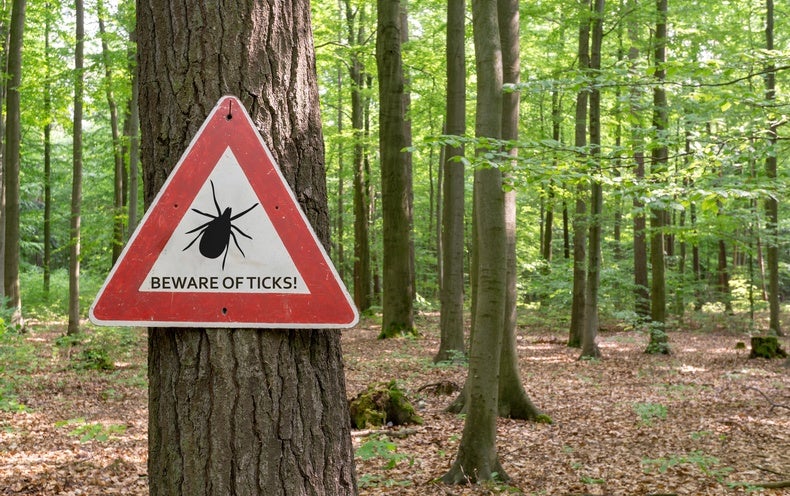 To slow down the rapid spread of tick-borne illnesses, the ideal public health strategy would be to predict where the pests are likely to be concentrated—and immediately getting this information to medical professionals and the public. That’s why researchers are trying to develop an accurate way of forecasting where dangerous ticks might be. Such a program could ideally be used like a weather map to anticipate danger areas.

When it comes to tick-borne illness, forewarned is forearmed. If hikers, for example, have a forecast indicating that the woods they are passing through are likely to have dangerous ticks, they can take extra steps to protect themselves with bug repellent, long sleeves and tight pant cuffs. Local health care providers can make sure they are looking out for symptoms of tick-borne illnesses. Local officials can advise citizens on how to take care outside during the danger season. But making accurate predictions is complicated. Many factors, not all of them well understood by scientists, shape where and when disease-carrying tick species will thrive—and if they are likely to carry a pathogen at all.

Every year people are diagnosed with and treated for tick-borne illnesses such as Lyme disease, anaplasmosis and Rocky Mountain spotted fever. For Lyme disease alone, the annual figure is nearly half a million, according to estimates from the U.S. Centers for Disease Control and Prevention. And that number is expected to rise as many tick species continue to expand their ranges. Personal protections—such as long sleeves, tick repellents and regular checks of humans and companion animals—are the best defenses currently available against the ticks that carry these diseases. But putting such measures in place takes a lot of continuous individual work—and as the COVID-19 pandemic has so clearly demonstrated, simply telling people that risk exists is often not enough to compel action.

Because some tick protections are annoying and difficult to maintain, says Richard Ostfeld, a disease ecologist at the Cary Institute of Ecosystem Studies, “you don’t necessarily want to employ those methods all the time everywhere. But you might want to employ them where there’s high risk.” That’s where a tick forecast would come in handy: a “heat map” showing which areas can expect high numbers of disease-carrying ticks at a given time would allow residents and visitors to gear up when they have to but relax their vigilance when conditions are safer. “All of those personal protective measures benefit hugely from knowing where and when you’re at risk,” Ostfeld says.

The risk level rises and falls with the population numbers of disease-carrying ticks. Scientists already know some of the things that can make these numbers rise, such as an abundance of suitable animal hosts, warm winters, humid summers and habitats with lots of vegetation but low plant diversity. Researchers also have a sense of what lowers tick populations: cold winters, hot and dry summers, and certain kinds of tiny fungi that live in soil and attack bugs.

But the influence of each of these factors varies according to what tick species are involved and can also change according to each species’ preferred kinds of habitats, says Rebecca Eisen, a research biologist at the National Center for Emerging and Zoonotic Infectious Diseases. For example, American dog ticks (Dermacentor variabilis), which spread diseases such as Rocky Mountain spotted fever, thrive in grassy areas. Deer ticks (Ixodes scapularis), a vector for Lyme disease and other infections, are more likely to live in woodland habitats.

Environmental factors that might at first seem unrelated can additionally have strong but indirect effects on tick numbers. For instance, the Cary Institute studied fields in New York State’s Dutchess County for decades and found a strong and peculiar correlation: when the local oak trees produced abundant acorns in a given year, the deer tick population ballooned the following year. The link: small, acorn-eating rodents, particularly the white-footed mouse (Peromyscus leucopus), whose populations also shot up during strong acorn years—and whose furry bodies are a great source for the blood that the ticks need in their nymph stage.

Still other factors can have a big effect on the spread of tick-borne disease but not necessarily on the tick population itself. For instance, white-footed mice are a significant disease reservoir for Lyme disease, as well as a potential carrier of other ailments that can be passed to humans. If a tick feeds on an infected white-footed mouse, the tick has a 90 percent chance of picking up the bacterium that causes Lyme disease, says Felicia Keesing, a Bard College disease ecologist. Keesing and Ostfeld are married and have frequently collaborated. Conversely, if the same tick feeds on an infected possum, the chance is only about 3 percent. Why is that? Good question, Keesing says. When it comes to how the disease leaves animal reservoirs and transfers via ticks to humans, “we don’t know why,” she says. “We just know that it happens.”

And there are many other unanswered questions as well. At the top of Ostfeld’s list of these is weather: although researchers have a general sense of the meteorological conditions that might promote tick abundance, he says, some specific factors are still poorly understood. For instance, events such as flooding, heat waves or cold snaps can kill ticks early in their life cycle—or encourage the population to boom. “It’s a big unknown,” Ostfeld says.

In addition to dealing with such unknowns, combining all these factors into a single model presents other problems. Scientists are working to perfect models that combine known tick factors and spit out something that resembles a weather forecast but for tick abundance. One such initiative at Boston University’s Ecological Forecasting Laboratory involves using the Cary Institute’s long-term tick data to train a type of probability model called a Bayesian network. The lab feeds its model a number of variables, including the weather conditions and previous populations of host animals, along with estimated numbers of ticks at all three of the life stages at which the parasitic critters seek out hosts: larvae, nymphs and adults. Next the researchers note how well the program forecasts what actually happens, checking it against known tick data. “Model forecasts are continually updated, based on how prior predictions fit with actual data,” Ostfeld says. But, he adds, this project and others like it are still in early stages.

One major constraint on this kind of modelling is data availability: while the Cary Institute’s tick records are detailed and lengthy, they cover only a small part of upstate New York’s Hudson River Valley. That kind of information doesn’t exist for most places in the U.S. And because tick populations are so location-dependent, making accurate predictions about them requires very specific local data. In order to begin filling that gap, since 2018 the CDC has been publishing national tick surveillance data to pinpoint the current range of several medically important ticks. More recently, it began publishing data on seven key tick-borne illnesses. This information serves as a resource for scientists such as Keesing and Ostfeld, as well as for the CDC’s own researchers. It is “the sort of background fundamental info that we should have,” Keesing says.

The CDC has also started developing its own probability models to predict where ticks are likely to be found in significant numbers—and where they are likely to spread infection—Eisen says. “We generate these statistical models to come up with what defines a good habitat for the tick or the pathogen,” she says. These models help the government agency allocate its limited resources and zero in on new locations where ticks are likely to be found, either now or in the future. They use mostly county-level geography, climate and vegetation data. “The resulting maps help us to identify areas where it looks like environmental conditions are suitable for the tick or pathogen to persist,” Eisen adds, “but where we haven’t yet found records of the tick or pathogen.” Then they go looking for evidence of ticks and tick-borne illnesses in those locations.

Such efforts are helpful, but most researchers who work on this issue acknowledge that a true forecast—one that could predict not only where ticks are likely to be but whether those specific ticks are likely to spread illness—is still out of reach. Data collection is one piece of that puzzle, but another is a better understanding of how ticks interact with host species, both human and nonhuman, and how the arthropods act as conduits for disease.

Even without a forecast model, records of past tick activity can indicate potential disease hotspots of the future. The CDC has partnered with other organizations and individuals to produce maps that highlight areas where tick-borne disease is on the rise. Still, unlike the maps that a weather forecast might use to show the areas at risk of heat or rain, these tick maps merely indicate where disease has already been found—not where it might already be spreading undetected.

An Boy Bosses of Silicon Valley Are on Their Way Around