The plexiglass barriers at tonight’s debate will be pretty useless, virus experts say. 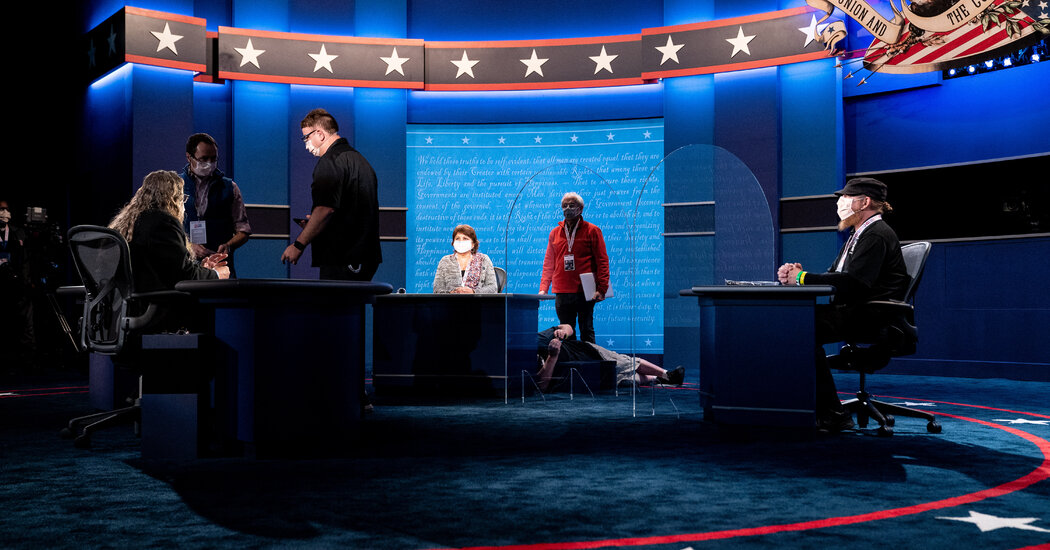 A box fan, an air filter — and duct tape to attach them. With four such devices cobbled together for a grand total of about $150, the vice-presidential debate on Wednesday night can be made much safer than with the plexiglass barriers being used, according to experts in airborne viruses.

Vice President Mike Pence and Senator Kamala Harris will be seated more than 12 feet apart, with barriers between them. But the barriers will do nothing to protect Ms. Harris if Mr. Pence is infected and exhaling virus that can be carried through the air, experts said.

On Monday, the Centers for Disease Control and Prevention released new guidelines indicating that indoors, the virus can be carried aloft by aerosols — tiny droplets — farther than six feet. In one study in August, scientists found infectious virus at a distance of 16 feet from an infected patient.

Linsey Marr, an environmental engineering professor at Virginia Tech and an expert in airborne viruses, laughed outright when she saw a picture of the debate setup.

“It’s absurd,” she said. When she first heard there would be a plexiglass barrier, she said, she imagined an enclosure with an open back or top. “But these are even smaller and less adequate than I imagined.”

Other experts said the barriers would have made some sense if the debaters were seated close together.

“Those plexiglass barriers are really only going to be effective if the vice president or Kamala Harris are spitting at each other,” said Ellie Murray, an epidemiologist at Boston University.

“Those are really just splatter shields.”

“At 12 feet 3 inches apart, spray droplet transmission is not the issue,” said Donald Milton, an aerosol expert at the University of Maryland. “What is the ventilation like? What is the direction of the airflow?”

Dr. Milton and his colleagues contacted the debate commission and both campaigns to recommend purchasing plug-and-play air filters — excellent ones run to just about $300 each — or four box fans and air filters taped together. Each debater would have one device positioned to suck up and clean the air exhaled, and another to produce clean air.

In research conducted with singers over the past few months, they have found that this so-called “Corsi box” — named for Richard Corsi, the scientist who cobbled together the first one — can significantly decrease aerosols.

The safest solution, experts said, is to move the debate online.