The Pandemic’s Next Effect: A Giant Wave of Disabling Grief 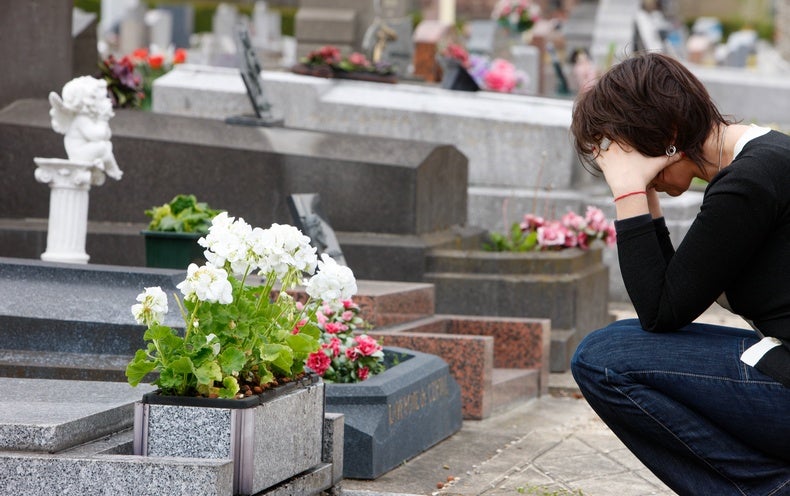 The deaths of more than 586,000 people in the U.S. from COVID since the spring of 2020 have left many millions grieving. A sizable number of these bereaved individuals will find their anguish lasts an unusually long time, does not diminish and renders their life almost unbearable, mental health specialists say.

People who sufferer this intense bereavement are frequently unable to keep their job, leave their home or care for other loved ones. Even those who are able to navigate some of everyday life describe their agonized existence as just waiting to die. Their continued high level of stress can damage the body, increasing inflammation and risks for associated illnesses such as heart disease.

This condition, a psychiatric state called prolonged grief disorder, typically lasts for many months after a loss—one year in the U.S. or six months per international criteria. The condition is much worse than normal grieving, says Katherine Shear, a psychiatrist at the Columbia University School of Social Work and founder of the Center for Complicated Grief. And the isolation surrounding so many pandemic deaths likely makes people more vulnerable to it. “There are so many aspects of the pandemic that are going to be risk factors for people having a hard time adapting to these losses,” Shear says.

The number of people with prolonged grief in the near future and beyond could be substantial. A July 2020 study published in the Proceedings of the National Academy of Sciences USA estimated that each U.S. COVID death leaves, on average, approximately nine close relatives bereaved. If 5 to 10 percent of the bereaved group develops this disorder—which is the standard rate under normal circumstances—this could put the prevalence of prolonged grief at an additional quarter of a million to half a million cases in the coming year. Other data hint the toll could be much higher. A March 2021 poll from the Associated Press–NORC (AP-NORC) Center for Public Affairs Research found that about 20 percent of people surveyed in the U.S. had lost a relative or close friend to COVID. That means a potential bereaved population of about 65 million, and it could push numbers of new prolonged grief cases into the millions.

Because COVID deaths have disproportionately occurred among low-income communities and people of color, prolonged grief will likely have an outsized effect on those populations, Shear and other therapists say. What is especially worrisome is that these communities, and the U.S. in general, do not have sufficient mental health resources—therapists and facilities—to address a problem of this magnitude. “If we don’t find ways to bring attention to the emotional suffering that people are coping with right now, it will turn into more serious problems,” says Vickie Mays, a professor of health policy and management at the University of California, Los Angeles, Fielding School of Public Health.

A Wound That Time Will Not Heal

Grief can be terrible. Most people, however, eventually integrate their loss and find a way forward, even as they continue to mourn their loved ones. Mary-Frances O’Connor, a clinical psychologist at the University of Arizona specializing in grief and its physiological impacts, likens this process to healing a broken leg: For the majority of people, rest and a cast will allow it to return to normal. Yet for a subset, a complication will arise—an infection or secondary trauma to the area—that prevents it from healing properly without more intensive intervention. In bereavement, those are the people with prolonged grief.

O’Connor describes one patient she worked with who lost her job because she could not get through standard work conversations without breaking down in tears for months on end. Another patient felt it would be meaningless to have religious celebrations for her children after losing her mother. “These types of complications really do impact daily functioning for people,” O’Connor says.

The health implications of the disorder can be serious. It can exacerbate suicidality and substance misuse. It is also linked to systemic damage to the body. O’Connor found that people experiencing grief have higher levels of inflammation, particularly the cytokine interleukin-6, which has been linked to increased risk of cardiovascular disease and greater susceptibility to infections. O’Connor notes that long-term psychological and social distress leads to a harmful “weathering” in the body, a well-established state of prolonged biological stress that predisposes people to greater disease risk and earlier health decline.

There are already signs that the pandemic is creating higher levels of serious grieving disorders, says psychologist Robert Neimeyer, director of the Portland Institute for Loss and Transition in Oregon and an author of several books on grief therapy. He sees “worrisome signals” that there will be a higher incidence of prolonged grief. Research published earlier this year in the journal Globalization and Health found signs of prolonged grief in nearly 38 percent of pandemic-bereaved individuals from China. That number is more than triple the typical rate, Neimeyer notes.

Researchers say there are many aspects of the pandemic that are likely to increase the risk of the disorder. One cause may be the circumstances surrounding most COVID deaths. “There’s a lot of trauma associated with [a coronavirus] loss,” Shear says. Whether these deaths occur in a hospital or at home, people are struggling to breathe, and the patient is usually isolated because of infection concerns. “It’s happening kind of randomly and quickly and dramatically, and people are suffering a great deal,” she adds. “They’re not peaceful deaths by any means. And they’re also occurring alone.”

The lack of contact with a loved one before or during death can add to the likelihood the bereaved will ruminate on alternative outcomes, preventing them from accepting the reality of the loss. O’Connor says that relatives often wonder, “‘What if I had done this? What if the doctor had done that?’ There are an infinite number of things that could have happened, and that rumination process seems to get in the way of returning to a meaningful life.” Previous research has found that meaningful communication with a loved one before their death reduces the risk of survivors developing persistent issues with grief later on. But this often has not been possible in person, or at all, with those who died from COVID.

Another contributing factor for people who lost loved ones during the pandemic—from COVID or another cause—may be the past year of public health measures that limited gatherings, travel and close interpersonal contact. Although these measures have proved essential for controlling the spread of SARS-CoV-2, and the death and hospitalization numbers would be much higher without them, “grief is complicated by taking away so many of the traditional ways you would grieve,” Mays says. A memorial over Zoom is “a far cry from being able to really come together with others and experience the consolation of a human hug,” Neimeyer says. The restrictions also reduced people’s ability to create new experiences and social connections after a loss, a key step in acclimating, Shear notes. The pandemic has increased the incidence of mood and anxiety disorders and substance misuse, all of which put people at greater risk for prolonged grief disorder.

Other pandemic stresses—from financial problems to health and safety concerns—can make adapting to a loss more difficult because they distract people from processing it, Shear notes. This is likely affecting a disproportionate percentage of people in communities hit hardest by the pandemic. Some have lost more than one loved one, some have lost a job and/or home, and many have been burdened with significant financial strains resulting in food or housing insecurity. “When you have a lot of uncertainty, that makes it more difficult to go through a grieving process,” Mays says.

There are effective, science-backed treatments for prolonged grief, but they involve months of therapy. Professionals in Europe, for example, treat the disorder with more than two months of group and individual therapy sessions to address patients’ behavior and responses. Shear’s group at Columbia has developed a 16-week one-on-one treatment protocol, validated through research, that focuses on adapting to loss.

Offering such intensive interventions in historically marginalized communities, with fewer financial and health resources and yet more risk, is challenging, Shear notes. In a small study, her team found its treatment program was equally effective among white and Black Americans. But the number of people of color who may be suffering from prolonged grief will likely be high because of the disproportionate impact of COVID on their communities. The AP-NORC poll about losses found that while about 15 percent of white respondents had lost someone close to them to COVID, that percentage doubled for Black and Latino individuals.

Access to mental health care in the U.S. is lacking, with approximately 30 psychologists and fewer than 16 psychiatrists per 100,000 people. That ratio is even more lopsided in communities that have suffered the most during the pandemic. “It looks even more abysmal,” Shear says, and it’s another aspect of systemic racism in health care in the U.S. According to Shear, many therapists are not aware of prolonged grief disorder, because mental health professionals in general receive little to no training in treating even typical grief.

There are less intensive approaches that can provide some help, Mays says. For starters, she advocates for a safe return to rituals, community support, and communal commemoration and conversations around pandemic losses. “I’m not big on believing that we need people to be in one-on-one mental health services,” she says. O’Connor adds that if we can also better alleviate some of the secondary stressors many people are facing—lack of food, for instance—they will be better equipped to recover from loss. “For a person who has sufficient housing and food security and childcare, now suddenly you have the bandwidth to understand what it means that you lost your mom,” she says.

As the U.S. works its way out of the immediate viral threat, Neimeyer emphasizes that the need for solutions to this shadow mental health breakdown is growing. “This pandemic of grief is one for which there is no vaccine,” he says.

IF YOU NEED HELP
If you or someone you know is struggling or having thoughts of suicide, help is available. Call the National Suicide Prevention Lifeline at 1-800-273-8255 (TALK), use the online Lifeline Chat or contact the Crisis Text Line by texting TALK to 741741.