The Pacific Spiny Lumpsucker Is Armed to the Teeth 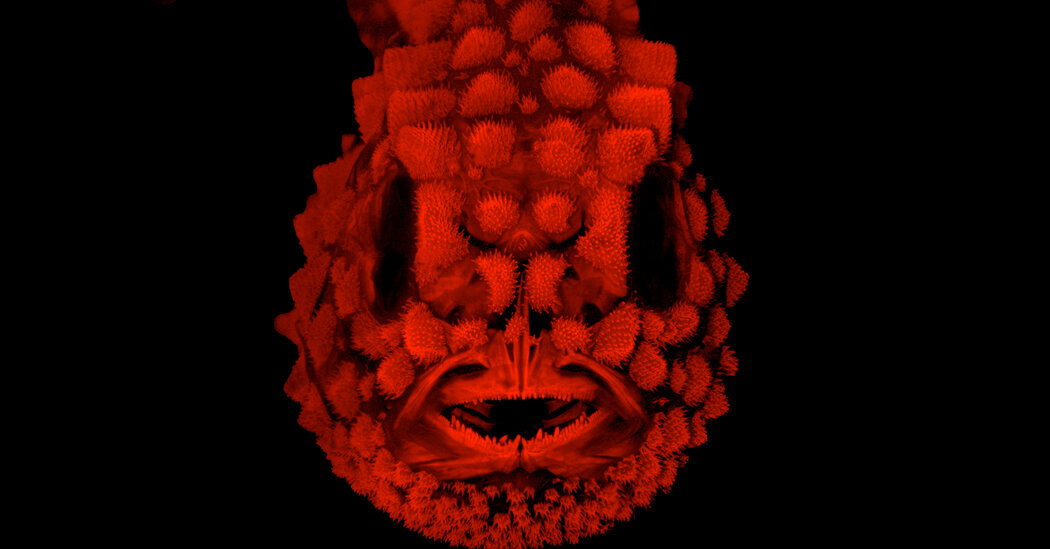 The nightmare of the Pacific spiny lumpsucker starts with the teeth: needle-sharp, lining the rim of bulbous lips. A single fin crowns the fish’s head like a mohawk, and spiked studs cover nearly every inch of its body, recalling an armored car from a “Mad Max” movie.

“Pacific spiny lumpsuckers are certainly one of the cutest fish that you can find,” Karly Cohen, a Ph.D. candidate in biology at the University of Washington, said recently.

Ms. Cohen and her colleagues have found that the fish has an extremely curious evolutionary and life history. In a study published in December in the Journal of Morphology, the researchers looked at how Pacific spiny lumpsuckers develop such armor and how they use it.

The known range of Pacific spiny lumpsuckers stretches from the coast of Washington State up through western Canada and Alaska, across the Bering Sea to eastern Russia and down to northern Japan. They live in waters several feet deep and can vary in size between a golf ball and a human head.

In addition to resembling a spiky puffball, the lumpsucker also has suckers on the bottom of its body similar to those on octopus tentacles. These evolved long ago from pelvic fins, Ms. Cohen said, and enable the lumpsucker — a terrible swimmer — to cling to rocks, coral and other surfaces and not be swept away by the strong currents of the intertidal zone.

“Being a really round fish in a bouncy environment is a tough job,” Ms. Cohen said.

The Pacific spiny lumpsucker is typically an ambush predator, sitting and waiting to suck in small fish, crustaceans or other creatures that pass by. Its stationary lifestyle means that it often serves as a platform for algae, which provide camouflage in its rocky surroundings, said Leo Smith, an ichthyologist at the University of Kansas who was not involved in the research.

The lumpsucker’s habit of staying put also allows the males to be stay-at-home dads. The females often lay their eggs in empty barnacle shells, and the males guard them aggressively until they hatch.

Research by Ms. Cohen and her colleagues, and recently accepted in the Journal of Morphology, found that male lumpsuckers also fluoresce a bright red. This may help them hide while babysitting eggs; the algae that grows on the barnacles fluoresces the same color as the fish.

The young, once hatched, sink to the sea floor and grasp onto something with their fully developed suction cups. “They just stick there for a while, like, ‘This is my safe spot, this is where I go,’” Ms. Cohen said.

The researchers ran CT scans on lumpsuckers they captured off the shore of the University of Washington’s Friday Harbor Laboratories on San Juan Island between Vancouver Island in Canada and the Washington State mainland. They found that the scales are made of enamel and aren’t fish scales at all but odontodes. “They come from teeth,” said Ella Woodruff, an undergraduate at Carleton College in Minnesota and an author on the December study.

The study found that Pacific spiny lumpsucker hatchlings start their lives with armor only around their mouths, where teeth would be. As the young grow, the odontodes spread toward the tail, like a lumpsucker version of wisdom teeth. The armor shields them from predators and the tumultuous environment of the intertidal zone, where crashing debris could do serious damage to an unprotected softball.

“It protects their bones from secondary infection from getting banged around,” Dr. Smith said, and the plates grow back if they fall off, adding insurance and flexibility.

Normally a full set of armor would spell trouble for a clumsy swimmer. But enamel is lighter than other kinds of bone, so it doesn’t weigh them down much, Ms. Cohen said.

Dr. Smith said that the new study helped to explain why the armor of the Pacific spiny lumpsucker is so different from that of other animals in the intertidal zone, and why the creature looks so strange.