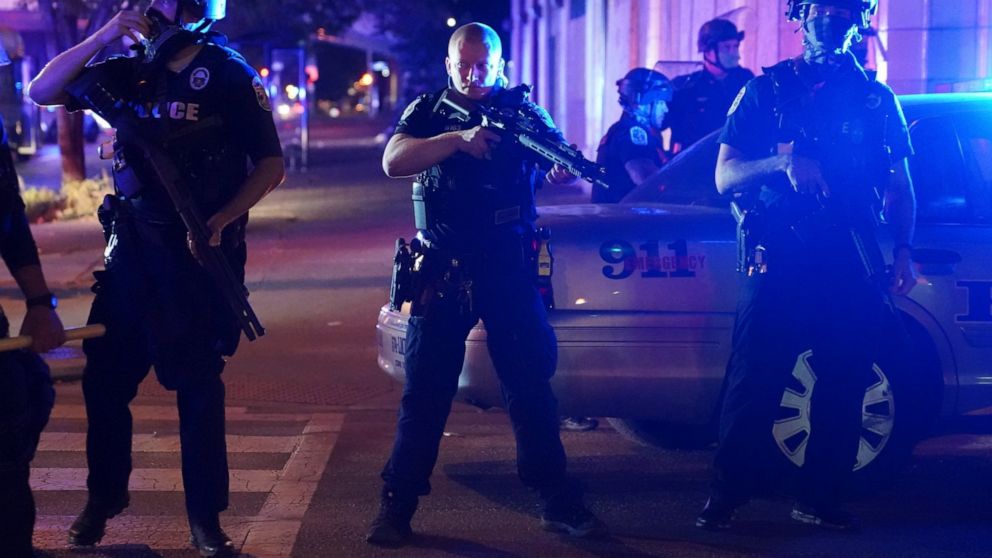 LOUISVILLE, Ky. — The Latest on a grand jury’s decision not to indict police officers on criminal charges directly related to Breonna Taylor’s death: (all times EDT)

Police say they’ve made 127 arrests in Louisville, Kentucky, after protests over the grand jury’s decision to not indict officers in the fatal shooting of Breonna Taylor.

A police statement early Thursday says some were arrested after damaging businesses and more were detained after jumping on city vehicles being used as barricades. Later, protesters who refused orders to disperse were arrested for curfew and unlawful assembly violations.

Police also said some businesses were looted early Thursday including two City Gear stores and a pawn shop. No further information was released about a suspect accused of shooting two officers while demonstrations were ongoing.

Police said one of them underwent surgery and both are expected to survive.

HERE’S WHAT YOU NEED TO KNOW ABOUT THE BREONNA TAYLOR CASE:

A Kentucky grand jury has brought no charges against Louisville police for the killing of Breonna Taylor during a drug raid gone wrong. Prosecutors said Wednesday that two officers who fired their weapons at the Black woman were justified in using force to protect themselves. Instead, the only charges brought by the grand jury were three counts of wanton endangerment against fired Officer Brett Hankison for shooting into Taylor’s neighbors’ homes. Taylor was shot multiple times by officers who burst into her home on March 13 during a narcotics investigation.

— A timeline of events related to the death of Breonna Taylor

In downtown Portland, Oregon, the site of months of demonstrations against police brutality, several hundred people held a rally in the rain Wednesday night in front of the Multnomah County Justice Center, the Oregonian/Oregonlive.com reported.

A drum line played in rhythm with chants of “Whose life mattered? Breonna Taylor!”

Several Black women addressed the crowd and encouraged people to vote and continue pressing for change, the newspaper reported.

Police say they have deployed chemical agents on Atlanta protesters demonstrating against a grand jury’s decision not to indict police officers for the fatal shooting of Breonna Taylor.

Georgia State Patrol Spokesperson Franka Young has told The Associated Press the chemical agents were fired after “some unruly protesters” attempted to climb on top of a SWAT vehicle that was stationed in the city.

“They were given orders to get off of the vehicle and when they ignored the orders, the SWAT team was forced to utilize less lethal gas to deter them,” Young said. Some protesters were also arrested after refusing orders to disperse from roads and to walk on sidewalks, Young said. It is not clear how many people were arrested. Young said many protesters had followed police orders.