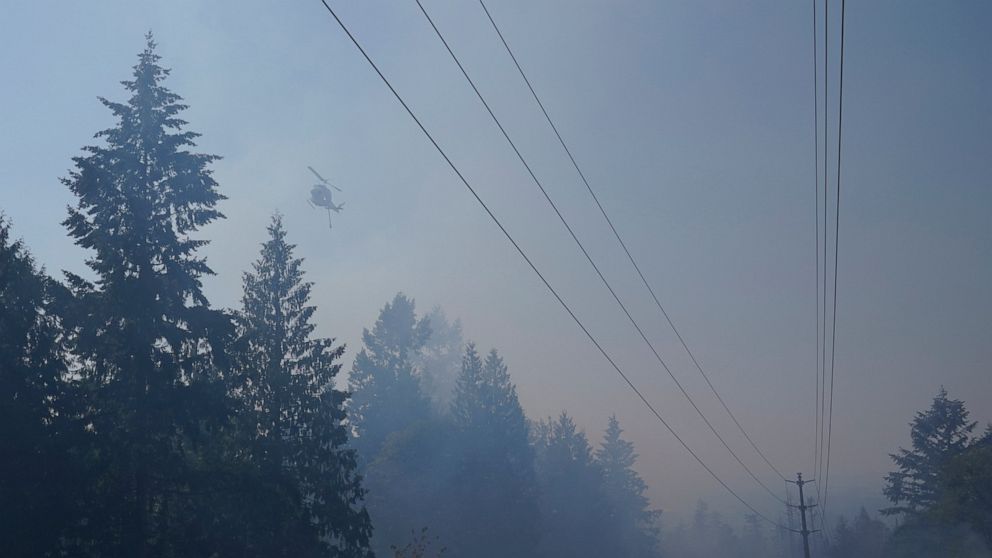 Oregon Gov. Kate Brown said more than 900,000 acres have burned across the state in the last several days – nearly double the amount of land that usually burns in a typical year

The Latest on wildfires in the U.S. West (all times local):

SALEM, Ore. — Oregon Gov. Kate Brown said more than 900,000 acres have burned across the state in the last several days – nearly double the amount of land that usually burns in a typical year.

At a news conference Thursday, she said there have been fatalities but the exact number is not yet known. There have been at least three reported fire deaths in the state.

The governor also said up to 40,000 people had to evacuate because of encroaching flames.

“We have never seen this amount of uncontained fire across the state,” Brown said.

The windy, hot conditions will likely continue through Thursday, she said, continuing to hamper firefighting efforts. Brown said she had requested firefighting help from other states and the federal government.

OROVILLE, Calif. — California authorities say a wildfire that roared through foothills of the northern Sierra Nevada this week has destroyed or damaged about 2,000 structures, including homes and other buildings.

Cal Fire says there was major damage to communities including Berry Creek and Feather Falls.

Winds have moderated but authorities say more than 22,000 structures are still threatened, including the city of Oroville.

The improved weather is allowing more aggressive firefighting but heavy smoke is hampering use of aircraft.

WILLOWS, Calif. — A wildfire burning since last month in Northern California is now the state’s largest on record.

The blaze originated as 37 separate fires in the Mendocino National Forest on Aug. 17, when California was hit by thousands of lightning strikes.

Many of the fires merged and others have since been added, and the complex now covers parts of Glenn, Mendocino, Lake, Tehama and Trinity counties. It has destroyed 26 structures as it consumes chaparral, timber and tall grass.

The state’s second-largest fire is now the Mendocino Complex, which burned more than 717 square miles (1,857 square kilometers) in the same region in 2018.

The national park said in a statement Wednesday that hard frosts at night have killed plants and trees, which will aid the fire’s growth.

The so-called Lone Star Fire started on Aug. 22. Officials say it is expected to be contained by Oct. 30.

Firefighters are cutting down trees and heavy vegetation in the area to protect power lines, historic buildings and communication equipment.

SPOKANE, Wash. — The parents of a 1-year-old boy who died in a northern Washington state wildfire remained in critical condition Thursday in a Seattle hospital.

Okanogan County Sheriff Tony Hawley said the boy died after his family was apparently overrun by flames while trying to flee the giant Cold Springs Fire this week.

It was the state’s first death of this wildfire season.

Gov. Jay Inslee said Thursday that he and his wife were heartbroken to hear about the child’s death.

Hawly said the family from the Seattle suburb of Renton was discovered by searchers Wednesday morning along the banks of the Columbia River. He said all were badly burned and the child was dead.

Hawley said the parents Jacob Hyland, 31, and Jamie Hyland, 26, were flown to Harborview Medical Center in Seattle for treatment of third-degree burns.

The hospital listed them in critical condition and in intensive care on Thursday. According to a GoFundMe page set up for the family, Jamie Hyland is pregnant.