The Forgotten History of the World’s First Trans Clinic 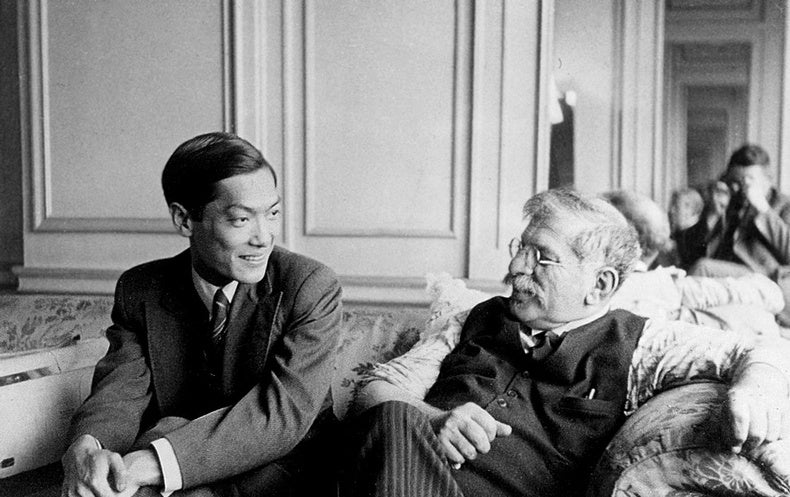 The first gender affirmation surgeries took place in 1920s, at a facility which employed transgender technicians and nurses, and which was headed by a gay Jewish man. The forgotten history of the institute, and its fall to Nazis bent on the euthanasia of homosexuals and transgender people, offers us both hope—and a cautionary tale—in the face of oppressive anti-trans legislation in the United States.

This story begins late one night in Berlin, on the cusp of the 20th century. Magnus Hirschfeld, a young doctor recently finished with his military service, found a German soldier on his doorstep. Distraught and agitated, the young man had come to confess himself an urning, a word used in Germany to refer to homosexual men. It explained the cover of darkness; to speak of such things was dangerous business. The infamous “Paragraph 175” in the German criminal code made homosexuality illegal; a man so accused could be stripped of his ranks and titles and imprisoned.

Hirschfeld understood the soldier’s plight; he was, himself, both homosexual and Jewish. He had toured Europe, watched the unfolding trial against Oscar Wilde, and written an anonymous pamphlet asking why “the married man who seduces the governess” remains free, while homosexual men in loving and consensual relationships—men like Oscar Wilde—were imprisoned. Hirschfeld did his best to comfort the man, but upon leaving his doctor, the soldier shot himself. It was the eve of his wedding, an event he could not face.

The soldier bequeathed his private papers to Hirschfeld, along with a letter: “the thought that you could contribute to [a future] when the German fatherland will think of us in more just terms,” he wrote, “sweetens the hour of death.” Hirschfeld would be forever haunted by this needless loss; the soldier had called himself a “curse,” fit only to die, because the expectations of heterosexual norms, reinforced by marriage and law, made no room for his kind. These heartbreaking stories, Hirschfeld wrote, “bring before us the whole tragedy [in Germany]; what fatherland did they have, and for what freedom were they fighting?” In the aftermath of this lonely death, Hirschfeld left his practice to specialize in sexual health, and began a crusade for justice that would alter the course of queer history.

Hirschfeld called his specialty “sexual intermediaries.” Included beneath this umbrella were what he considered “situational” and “constitutional” homosexuals—a recognition that there is often a spectrum and bisexual practice—as well as what he termed “transvestites.” This group did include those who wished to wear the clothes of the opposite sex, but also those who “from the point of view of their character,” should be considered as the opposite sex.

One soldier with whom Hirschfeld had worked described wearing women’s clothing as the chance “to be a human at least for a moment.” He likewise recognized that these people could be either homosexual or heterosexual, something that is still misunderstood about transgender people today. Perhaps even more surprising was Hirschfeld’s inclusion of those with no fixed gender at all, akin to today’s concept of gender fluid or nonbinary identity (he counted French novelist George Sand among them). Most importantly for Hirschfeld, these men and women were acting “in accordance with their nature,” not against it.

If this seems like extremely forward thinking for the time, it was—possibly more forward thinking than our own. Current anti-trans sentiments center on the idea that transgender is both unnatural and new. In the wake of a U.K. court decision limiting trans rights, an editorial in the Economist argued that other countries should follow suit, and an editorial in the Observer praised the court for resisting a “disturbing trend” of children receiving medical treatments as part of a gender transition. But history bears witness to the plurality of gender and sexuality; Hirschfeld considered Socrates, Michelangelo and Shakespeare to be sexual intermediaries; he considered himself (and his partner Karl Geise) to be the same. Hirschfeld’s own predecessor, Richard von Krafft-Ebing, had claimed in the 19th century that homosexuality was natural sexual variation—and Hirschfeld believed that a person was congenitally born that way.

This was no trend or fad, but a recognition that people may be born with a nature contrary to their assigned gender. And, in cases where the desire to live as the opposite sex was strong, Hirschfeld thought science ought to provide a means of transition. He purchased a Berlin villa in early 1919 and opened the Institut für Sexualwissenschaft (Institute for Sexual Research) on July 6. By 1930 it would perform the first modern gender affirmation surgeries in the world.

A PLACE OF SAFETY

A corner building with wings to either side, the institute was an architectural gem that blurred the line between professional and intimate living spaces. A journalist reported it could not “be a hospital,” for it was furnished, plush, and “full of life everywhere.” It’s stated purpose: to be a place of “research, teaching, healing, and refuge” that could “free the individual from physical ailments, psychological afflictions, and social deprivation.” Hirschfeld’s institute would also be a place of education. While in medical school, he’d experienced the trauma of watching as a gay man was paraded naked before the class, to be verbally abused as degenerate.

At his institute, Hirschfeld would instead provide sex education and health clinics, advice on contraception, and research on gender and sexuality, both anthropological and psychological. He worked tirelessly to try and overturn Paragraph 175, managed to get legally accepted “transvestite” identity cards for his patients, and worked to normalize and legitimize homosexual and transitioning individuals. The grounds also included room for offices given over to feminist activists, as well as a printing house for sex reform journals meant to dispel myths about sexuality. “Love,” Hirschfeld said, “is as varied as people are.”

The institute would ultimately house an immense library on sexuality, gathered over many years and including rare books and diagrams and protocols for male-to-female (MTF) surgical transition. In addition to psychiatrists for therapy, he had had hired Ludwig Levy-Lenz, a gynecologist, and surgeon Erwin Gohrbandt. Together, they performed male-to-female surgery called genitalumwandlung—literally, “transformation of genitals.” This occurred in stages: castration, penectomy and vaginoplasty. (The Institute only treated men at this time; female-to-male phalloplasty would not be practiced until 1949 by plastic surgeon Sir Harold Gillies). Importantly, patients would also be prescribed hormone therapy, allowing them to grow natural breasts and softer features.”

Their groundbreaking studies, meticulously documented, drew international attention—and international patients, as well. Rights and recognition did not immediately follow, however. After surgery, some transwomen had difficulty getting work to support themselves, and as a result, five became nurses at the institute itself. In this way, Hirschfeld sought to provide a safe space for those whose altered bodies differed from the gender they were assigned at birth—including, at times, protection from the law.

That such an institute existed as early as 1919, recognizing the plurality of gender identity and offering support, even through affirming surgery, comes as a surprise to many. It should have been the bedrock on which to build a bolder future. But as the institute celebrated its first decade, the Nazi party was already on the rise. By 1932, it was the largest political party in Germany, holding more parliamentary seats, and growing its numbers through a nationalism that targeted the immigrant, the disabled, the “genetically unfit.” Weakened by economic crisis and without a majority, the Weimer Republic would collapse. Hitler was named chancellor on January 30, 1933 and would enact policies to rid Germany of lebensunwertes Leben; that is, “lives unworthy of living.” What began as a sterilization program ultimately led to the extermination of  millions of Jews, “Gypsies,” Soviet and Polish citizens—and homosexuals and transgender people. The Nazis came for the Institute on May 10, 1933. Hirschfeld was out of the country. Karl Geise fled with what he could carry; everything else would perish by fire.

The carnage would flicker over German newsreels, the first (but by no means last) of the Nazi book burnings. Troops swarmed the building, carrying off a bronze bust of Hirschfeld and all of his precious books. Nazi youth, women, and soldiers took part, the footage and its voiceover declaring the German state had committed “the intellectual garbage of the past” to the flames. Soon, a tower-like bonfire engulfed more than 20,000 books, some of them rare copies that helped to provide a historiography for nonconforming peoples; they could never be replaced.

The Nazis also stole lists of clients, adding the names to “pink lists” from which to poach homosexuals for concentration camps. Levy-Lenz, who like Hirschfeld was Jewish, fled Germany to escape execution—but in a dark twist, his colleague Erwin Gohrbrandt, with whom he had performed so many supportive operations, joined the Luftwaffe and would later contribute to grim experiments in the Dachau concentration camp. Hirschfeld’s likeness would be reproduced on Nazi propaganda as the worst of offenders, both Jewish and homosexual, all that the Nazis would stamp out in their bid to produce the perfect heteronormative Aryan race.

In the immediate aftermath of the Nazi raid, Karl Geise joined Hirschfeld and his protege Li Shiu Tong, a young medical student, in Paris. The three would continue living together as partners and colleagues with hopes of rebuilding the institute, until the growing threat of Nazi occupation once more required them to flee. Hirschfeld died of a sudden stroke in 1935 while still on the run. Giese committed suicide in 1938—and Hirschfeld’s protgege Li Shiu Tong would abandon his hopes of opening an institute in Hong Kong for a life of obscurity abroad.

Their history had been effectively erased—so effectively, in fact, that though the newsreels still exist, and the pictures of the burning library are often reproduced, few know they feature the world’s first trans clinic. The Nazi ideal had been based upon white, cishet (that is, cisgender and heterosexual) masculinity masquerading as genetic superiority. Any who strayed were considered as depraved, immoral, worthy of death. What began as a project of “protecting” German youth and raising healthy families had been turned, under Hitler, into a mechanism for genocide.

A NOTE FOR THE FUTURE

The story of Hirschfeld’s institute at once inspires hope and pride for an LGBTQ+ history that might have been, and could still be. It simultaneously sounds a warning. Current legislation, and indeed calls even to separate trans children from supportive parents, bear striking resemblance to those terrible campaigns against so-labeled “aberrant” lives. Studies have shown that supportive hormone therapy, accessed at an early age, lowers rates of suicide among trans youth—but there are those who, counter to Hirschfeld, refuse to believe that trans identity is something you can be “born with.” Richard Dawkins was recently stripped of his “humanist of the year” award for comments comparing trans people to Rachel Dolezal, a civil rights activist who posed as a Black woman, as though gender transition was a kind of duplicity. His comments come on the heels of yet more legislation in Florida banning transgender athletes from participating in sports, and an Arkansas bill denying transgender children and teens supportive care.

The future doesn’t always guarantee social progress. Hirschfeld’s Institute for Sexual Research, with its trans-supportive community of care, ought to have provided a firm platform to build a future that indeed thought of “sexual intermediaries” in “more just terms.” But these pioneers and their heroic sacrifices help to provide a sense of hope—and of history—for LGBTQ+ communities worldwide. May we learn the lessons of history, because where we go from here is up to us.