The First Rocket Launch from Mars Will Start in Midair 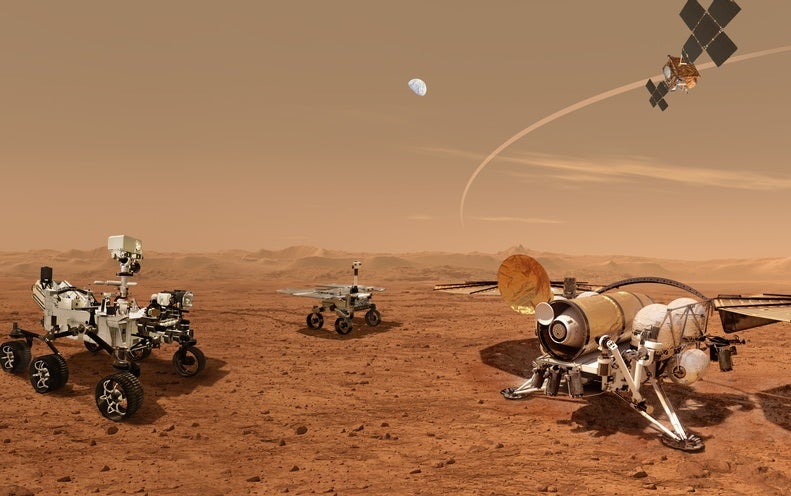 Within a decade, a small rover on Mars will pick up samples of rock left by a previous mission. It will then load them into a rocket secured within a small platform on a flat patch of the planet’s surface. Once the rocket’s hatch has closed, the platform will toss it upward on its side, a bit like a thrown American football. The rocket’s engines will ignite, propelling it into Martian orbit—where a waiting spacecraft will grab its invaluable samples for ferrying back to Earth and into the hands of researchers eager to study them for signs of past life on the Red Planet. One might call this wild interplanetary shuffle the most epic game of catch ever conceived, but scientists simply refer to it as Mars Sample Return.

“It’s never been done before,” says Chris Chatellier of NASA’s Jet Propulsion Laboratory (JPL), lead engineer of part of the launch system that will bring the samples back home. But it has been dreamed of—and planned—for decades.

The first step occurred with the landing of NASA’s Perseverance rover in Jezero Crater on Mars one year ago to explore the site’s eons-old river delta, targeted as one of the most likely locales to harbor any remnants of life from when the planet was a warmer, wetter world. Using an extendable arm and drill inside the crater, Perseverance has started collecting samples that likely date back billions of years. “We believe the samples will tell us whether there used to be life at the surface of Mars,” says NASA’s Thomas Zurbuchen, who oversees the space agency’s science missions. Ultimately Perseverance will place dozens of samples in small cigarlike tubes, caching them on the surface to await future collection.

The general outline for how this collection will take place is already clear, but key details remain undetermined. For example, where—and in how many locations—will the samples be cached? What will the “fetch rover” that will collect them—to be built by the European Space Agency (ESA)—look like? And perhaps most crucially, how will the samples successfully rocket off the surface of Mars and back to Earth? “This launch off another planet will be history-making,” Zurbuchen says. “With it comes answers to our neighboring planet that cannot otherwise be addressed.”

The details on that crucial last question have now moved a significant step forward. Last month NASA selected the U.S. aerospace firm Lockheed Martin for a potentially $194-million contract to build the three-meter-long Mars Ascent Vehicle (MAV), a relatively small rocket meant to propel Perseverance’s samples into orbit. Already, engineers are hard at work designing the MAV’s components, which must overcome multiple challenges unique to this first-of-its-kind mission. The Red Planet’s gravity, while only a third of Earth’s, must be overcome. Mars’s thin atmosphere, 100 times as tenuous as Earth’s, will make the launch unlike any on our planet—or from the airless moon or asteroids, where previous successful sample-returns have taken place. And the MAV’s all-or-nothing launch, millions of kilometers from Earth, must be both autonomous and flawless.

NASA says the MAV will launch to Mars in 2026 or later, and some have forecasted that the likely date will be 2028. It will be stored inside a landing platform not unlike those of predecessors such as NASA’s InSight lander. InSight touched down on Mars in 2018, performing a propulsive landing rather than relying on the more complex Sky Crane system required for the heavier Perseverance rover and its kin, Curiosity. The journey to Mars will be slow, 28 months in all, to ensure that the MAV touches down during local summer in or near Jezero. “The spacecraft needs to arrive at the proper season at Mars so that it doesn’t encounter dust storms,” says Dave Murrow, Lockheed Martin’s business development lead for deep space exploration.

After safely passing through the atmosphere, the lander will aim to land within a region of the crater that is as benign as possible in order to facilitate an easier subsequent liftoff. “We’ll be looking for a nice, flat landing site without many rocks,” Murrow says. The actual site will be selected in the coming years. The lander, devoid of scientific instrumentation, will be designed to protect the MAV on the surface, deploy ESA’s fetch rover and finally launch the sample-filled MAV back to orbit.

One major challenge will be ensuring that the aluminum-based fuel used by the MAV’s propulsion systems, provided by the U.S. aerospace company Northrop Grumman, does not freeze. Temperatures on the Martian surface average about –60 degrees Celsius, so the lander will need to warm the MAV, likely by using solar-powered electric heaters inside an insulated canister aptly called an “igloo.” This approach, engineers believe, should allow the MAV to linger on the surface for up to one Earth year, hopefully offering sufficient time for the fetch rover to retrieve Perseverance’s samples from one or more surface caches.

Then the real fun begins. Over the past few years, Chatellier and his team at JPL have been grappling with the surprisingly hard problem of how, exactly, to launch a small rocket from Mars. “We started with the basic idea of pointing [the MAV] on a rail and launching it off a platform,” Chatellier says. But the rail would need to be heavy and almost as long as the lander itself. “The concern was there’s not a lot holding the lander down,” says Angela Jackman, project manager of the MAV program at NASA’s Marshall Space Flight Center. Without the counterweight of a heavy rail, the exhaust plume from the launching MAV could kick the entire platform up into the air to strike the rocket. Earthbound testing of such a system in simulated Mars-like gravity and atmospheric conditions would also be very challenging.

So the team instead settled on another idea: What if the rocket could be tossed several meters above the surface, allowing more clearance for blastoff? “Although it might seem counterintuitive to throw up an unlit rocket, it actually does simplify the design and test process quite a bit,” Chatellier says. Such a “cold launch” system is not unprecedented: the U.S. Air Force’s Peacekeeper missiles, in service from 1987 to 2005, were lofted out of silos using steam pressure before their engines were ignited. The approach for MAV is also similar to a standard missile launch from a fighter jet, except “we’re just throwing it up off the ground,” Chatellier says.

The result is a launch system called VECTOR, or Vertically Ejected Controlled Tip-Off Release. For the past two years the JPL team has been testing a mock-up of the MAV with VECTOR, completing 23 “throws” in total so far, with cables catching the rocket in midair. (The system in its entirety, including the ignition of the rocket, will only be fully used for the first time on Mars.) VECTOR is designed to hurl the MAV skyward from Mars at about five meters per second using a force comparable to a strong human punch. As the MAV ignites its engine, one second post-toss, VECTOR will also help aim the craft, causing a rotation that tilts it up by 45 degrees from a horizontal orientation midair to allow the MAV’s two-stage rocket to propel the basketball-sized sample capsule to a 400-kilometer-high orbit above the planet. With any luck, Perseverance will still be operational and watching from a safe distance away, offering everyone back on Earth a virtual front-row seat for this first-ever Martian launch.

If all goes well, shortly thereafter a European-built spacecraft will swoop in to scoop up the sample capsule in Martian orbit, stowing it for the journey home. After departing from Mars, the capsule will purposefully crash land in the Utah desert in the early 2030s with its durable samples intact.

Audacious as it may be, VECTOR appears to be the best way to get the half-kilogram’s worth of samples Perseverance will collect back to Earth. “Everyone thought Sky Crane was crazy,” Chatellier says. “VECTOR has drawn similarities to that.” In the coming years he and his team hope to have completed about 50 tests of system so that it will be ready for launch to Mars in 2028. There are still other details to be worked out, including the finer mechanics of how the rocket will be hurled aloft, but the goal is to have a system that can cope with whatever conditions Mars throws at it. There will be no second chances. “We want to make sure we have a robust design so that, even on the worst possible day on Mars, we know the system is still going to work,” Chatellier says.

The dream of Mars Sample Return is now on the cusp of becoming reality, perhaps scarcely a decade away, aided by a deceptively simple idea: land a small rocket on Mars, toss it into the thin, cold air and launch it back to space. Even if the materials it ultimately helps return show no signs of life, the result will be no less historic. “We nerd out all the time on this,” Jackman says. “What we’re going to do is just amazing.”