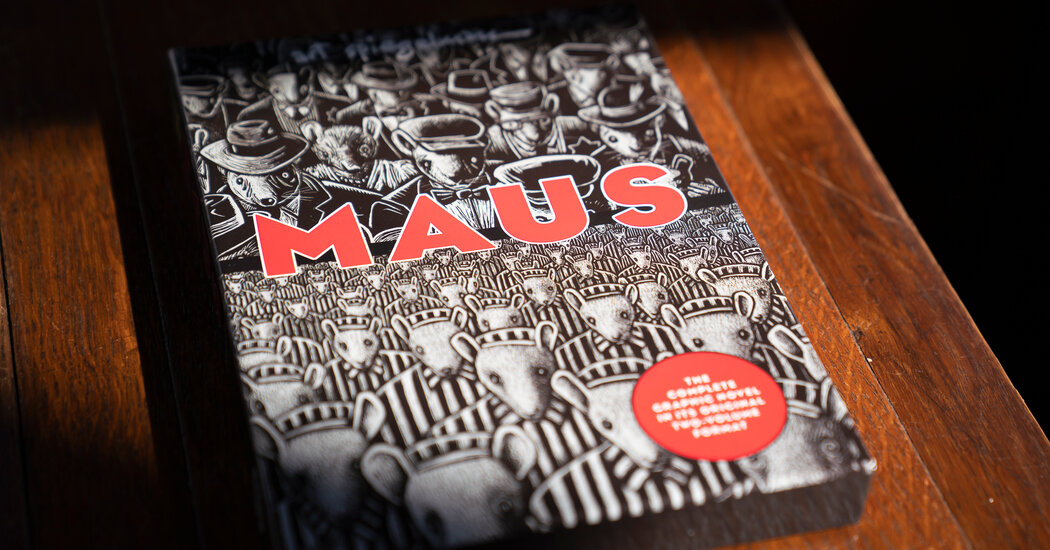 ATHENS, Tenn. — After the McMinn County School Board voted in January to remove “Maus,” a graphic novel about the Holocaust, from its eighth-grade curriculum, the community quickly found itself at the center of a national frenzy over book censorship.

The book soared to the top of the Amazon best-seller list. Its author, Art Spiegelman, compared the board to President Vladimir V. Putin of Russia and suggested that McMinn officials would rather “teach a nicer Holocaust.” At a recent school board meeting, opponents of the book’s removal spilled into an overflow room.

But the outcry has not persuaded the school board to reconsider. And the board’s objections do not stop at “Maus” or the school district’s Holocaust education materials.

Such efforts are being encouraged statewide, putting Tennessee at the forefront of a nationwide conservative effort to reshape what students are learning and reading in public schools.

One proposed Tennessee law prohibits textbooks that “promote L.G.B.T.Q. issues or lifestyles”; one that passed in June would prohibit materials that make someone feel “discomfort” based on their race or sex. Another allows for partisan school board elections, which critics worry will inject cultural grievances into education policy debates. State legislators in Nashville are considering a ban on “obscene materials” in school libraries as well as a measure requiring school boards to establish procedures for reviewing school library collections. Gov. Bill Lee recently announced a partnership with a Christian college to open 50 charter schools designed to educate children to be “informed patriots.”

The combined effect of all this activity has alarmed educators and others in the state who are concerned about academic freedom. “It’s just not one or two people here — there’s a mind-set coming from the governor on down to ban conversation and to segment communities and to erase life experiences from classroom discussion,” said Hedy Weinberg, director of the American Civil Liberties Union of Tennessee.

Kailee Isham, a ninth-grade English teacher in McMinn County, said the environment had changed her teaching. She hesitates to tackle topics like racism and socioeconomic or L.G.B.T.Q. issues in her classroom for fear of being targeted by conservative parents.

“A lot of my job is trying to figure out what is OK,” Ms. Isham said, adding, “Not being able to speak to the things that I think are really important — not being able to express myself — is a little bit frustrating at times when it seems like everyone else is having no trouble expressing themselves louder and louder.”

The McMinn County decision to ban “Maus” was widely interpreted as a rejection of or disregard for Holocaust education. The book, which portrays Jews as mice and Nazis as cats in recounting the author’s father’s imprisonment at Auschwitz, has been used in social studies classes across the country since the early 1990s, when it became the first graphic novel to win a Pulitzer Prize.

But school board members cited more narrow concerns: several instances of “inappropriate words” — including “bitch” and “goddamn” — and an image of a partially nude woman.

“This board is the arbiter of community standards as it relates to the curriculum in McMinn County schools,” Scott Bennett, the board’s lawyer, said at a packed February board meeting. “At the end of the day, it is this board that has the responsibility to make these decisions.”

The decision to remove “Maus” began around the beginning of the current semester with complaints from parents and teachers, according to school board members. The district had recently switched to a new curriculum provider, and it was the first time that the book would be assigned.

School staff members were initially directed to redact instances of “rough, objectionable language” as well as the nude image. But the school board decided that was not sufficient.

Tony Allman, a board member, noted that “Maus” described people being hanged and children being killed. “Why does the educational system promote this kind of stuff?” he asked. “It is not wise or healthy.”

Curriculum supervisors defended the depictions of violence as essential to telling the story of the Holocaust.

“People did hang from trees, people did commit suicide, and people were killed — over six million were murdered,” Melasawn Knight, a curriculum supervisor, said at the January meeting in which the board voted to remove the book from the curriculum.

One board member appeared concerned about the precedent the decision could set. “We might be throwing out a whole lot more things if we are going to take this stance on just a couple of words,” Rob Shamblin said at the meeting.

Nevertheless, Mr. Shamblin voted along with the rest of the 10-person board to remove the book from the curriculum. The next day, the director of county schools advised principals across the school system that “All ‘Maus’ books will be retrieved from your schools soon.”

Athens, the McMinn County seat, is a quiet, rural community with an elegant white-columned courthouse, low-slung 19th-century brick buildings and a reputation as the “Friendly City.” The county school system serves just 5,300 students. But in the weeks since the “Maus” decision was reported by local media, it has become the center of a new political activism, including among students.

Unprompted, boxes of donated copies of the book flooded the local public library. High school students have rushed to get copies, passing them to one another between classes.

Emma Stratton, a junior at McMinn County High School, drove with her mother and brother an hour away to Chattanooga to buy several copies of the graphic novel. “If they take away this book, what else are they going to take away from us?” Emma asked, adding, “They’re trying to hide history from us.”

A discussion of the book held on Zoom by a local church received so much interest that the church had to turn people away. Two residents have announced rare challenges to school board members up for re-election, with the backing of a new residents’ group leading the opposition.

The fight over “Maus” is the latest flash point in a national wave of conservative challenges to reading material for young people in school libraries and classrooms. Dozens of bills aimed at banning the teaching of topics derided as “critical race theory” have been introduced in state legislatures across the country in recent years. Conservative groups have targeted books about race, gender and sexuality, with more than 300 book challenges reported last fall, according to the American Library Association, which called the number “unprecedented.”

In Tennessee, the effort to rethink what materials are taught and made available to public school students is being promoted in earnest at the State Capitol, including by the governor, who has framed the issue around parental rights.

“We also need to empower parents with a candid look into not only how their children are learning but what their children are learning,” Mr. Lee, a Republican, said last month. “The vast majority of parents believe that they should be allowed to see books, curriculum and other items used in the classroom. That’s how I felt about my kids, and I stand with those parents today.”

Legislators have drawn from bills in other states, policy research from conservative think tanks and previous bills proposed in Tennessee to assemble a roster of legislation to limit materials and topics available to students. Pressure has mounted from local chapters of Moms for Liberty, a parents’ rights advocacy group that is active in Tennessee.

“We’ve got a perfect storm of circumstances that are encouraging legislators to address this issue,” said Deborah Caldwell-Stone, director of the American Library Association’s Office for Intellectual Freedom.

The Republican agenda to remake education goes even further: In his State of the State address, Mr. Lee proposed creating a $6 million American civics institute at the University of Tennessee as a counterweight to colleges and universities that he said have become “centers of anti-American thought, leaving our students not only ill-equipped but confused.”

State Senator Heidi Campbell, a Democrat, worries about what she sees as a broad effort to erode trust in public education. “It’s been a very effective way to whip up the crowds,” she said, adding, “The whole thing is about creating fear about the idea that woke socialists are trying to take over our country and indoctrinate our children. And ironically, it’s all serving the aim of indoctrinating our children.”

Even before the “Maus” vote in McMinn County, Ms. Isham, the English teacher, was rethinking her career. She entered the profession because she wanted to help students work through difficult topics, she said, but with the heightened scrutiny, it feels futile. She plans to quit teaching at the end of this semester, after just one year in the classroom. She does not know what is next.

“We are allowed to say less and less,” Ms. Isham said. “Our hands are tied behind our backs at this point.”