The Dinosaur Age May Have Ended in Springtime 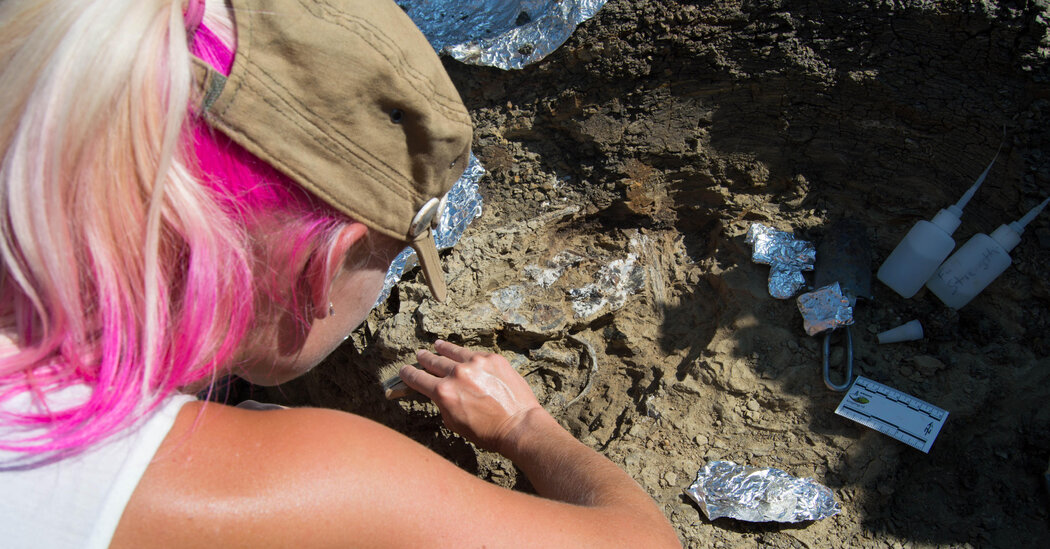 The dinosaur-killing meteor hit in spring.

That is the conclusion of scientists who examined the bones of fish that died on that day when a six-mile-wide asteroid collided with Earth.

“These fishes died in spring,” said Melanie During, a graduate student at Uppsala University in Sweden and lead author of a paper published on Wednesday in the journal Nature. “The reign of dinosaurs ended in spring.”

Scientists have known when the meteor hit — just over 66 million years ago, give or take 11,000 years — and where it hit, off the Yucatán Peninsula of Mexico. That ended the Cretaceous period of Earth’s geological history, but even though three-quarters or more of the species of plants and animals disappeared in the mass extinction that followed, it has been hard to pinpoint fossils of anything directly killed by the meteor.

But in 2019, paleontologists published the discovery in southwestern North Dakota of what appeared to be a mass graveyard of creatures that died hours or days after the impact. Although North Dakota was about 2,000 miles from where the meteor hit, the seismic waves of what was the equivalent of an earthquake with a magnitude of 10 or 11 sloshed water out of the lakes and rivers and killed the fish. Tektites — small glass beads propelled into the air by the impact — rained from the skies.

The researchers spent years exploring the site, known as Tanis, which is in the fossil-rich Hell Creek formation that stretches across four states. An article in The New Yorker described Tanis as a wonderland of fossil finds; the initial scientific paper describing the site was more sparse on details, focusing on the geological setting.

With the new science results, the fossils now provide insight into the cataclysm that was previously impossible to discern.

“It’s amazing that we can take an event, a single moment that happened 66 million years ago — literally a rock falling down and in an instant striking the Earth — and we can pinpoint that event to a particular time of the year,” said Stephen L. Brusatte, a paleontologist at the University of Edinburgh who was not involved in the research. “I think it’s a detective story of the highest caliber.”

Animals in the Northern Hemisphere — some emerging from hibernation or giving birth to young — might have been more vulnerable to extinction. “If it was spring, then it was not very likely for many organisms to be in hibernation,” Ms. During said during a telephone news conference arranged by Nature.

Animals in the Southern Hemisphere, hunkering down in autumn, might have been more sheltered from the sudden, drastic change in climate. “If you could hibernate that would increase your chances,” Ms. During said. “If you could seal yourself off in a burrow or if you could shelter underwater, that could help you.”

Dr. Brusatte agreed. “I think there is some potential here for helping understand the patterns and the processes of the extinction,” he said.

Ms. During first heard about Tanis during a talk in 2017 by Jan Smit, an expert on the dinosaur extinction at Vrije University in Amsterdam, where she was working on a master’s degree.

She was intrigued by his description of the North Dakota fossil finds. “I actually started typing him an email from my phone from the back of the room, saying, ‘Hey, if you have these fishes, can we please do isotopic analysis on their bones?’” Ms. During said.

She got in touch with Robert DePalma, the paleontologist orchestrating the study of Tanis. In August 2017, Ms. During flew to North Dakota and spent 10 days at Tanis excavating fossils of six fish: three sturgeon and three paddlefish.

In the laboratory, the scientists sliced thin pieces of bone from the lower jaws of the paddlefish and from the pectoral fin spines of the sturgeon. They saw repeating light and dark lines reflecting seasonal changes in the rate of growth, similar to tree rings. The outermost part of the bones indicated that the fish were becoming more active and growing faster after the end of winter.

“My guess is on April,” Ms. During said. “It was definitely not summer.”

Swings in the levels of different types, or isotopes, of carbon in the bones indicated how much plankton was in the water for the fish to eat. The levels were lower than what they would be during summer’s peak abundance. That added to the “various lines of evidence that we have that these fish perished in spring,” said Jeroen van der Lubbe, a paleo-climatologist at Vrije University and one of the authors of the Nature paper.

Tektites were found trapped in the gills of the fish but not in the digestive tract. “They couldn’t swim on,” Ms. During said. “They immediately died.”