The clash over Kenosha: Biden flips script on Trump as campaign heats up – POLITICO 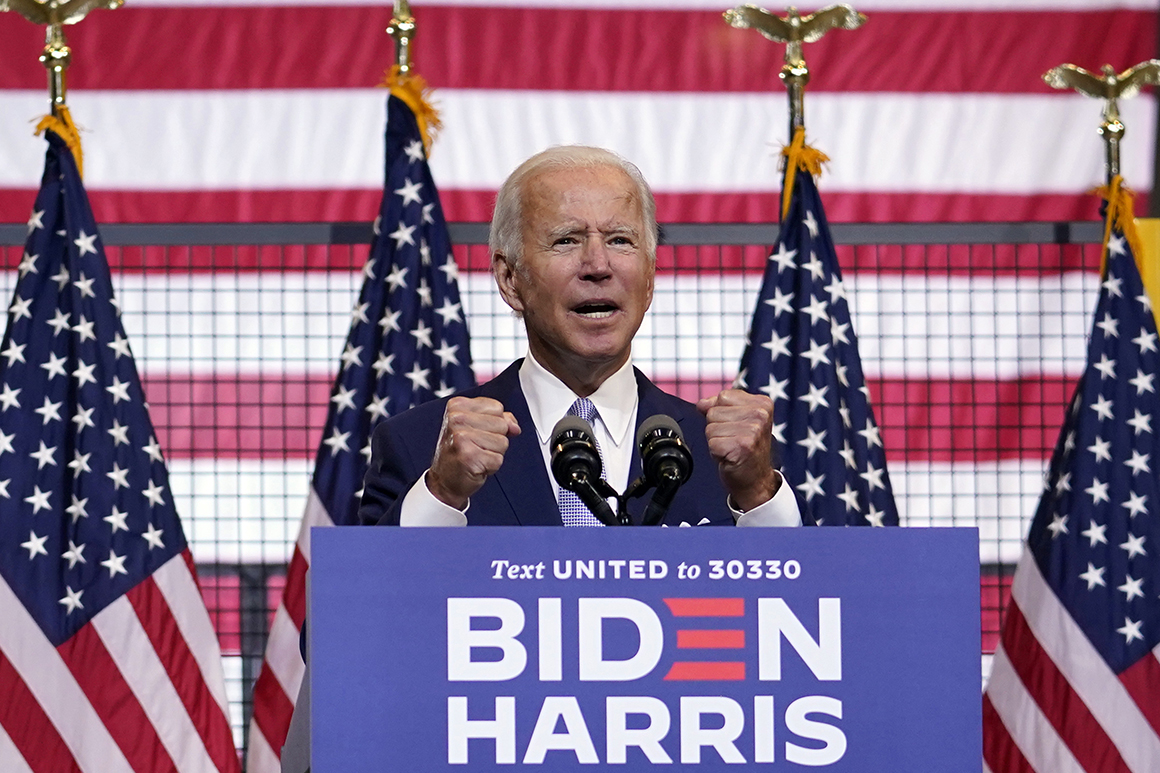 Biden went first. In a major speech in Pittsburgh, he offered a sweeping indictment of Trump’s America, highlighting failures in his handling of the coronavirus and portraying the president as so desperate to hold on to power that he is resorting to fear and hatred as a campaign strategy.

“He keeps telling us if he were president you would feel safe. Well he is president, whether he knows it or not,” Biden said. “Does anyone think there will be less violence in America if Donald Trump is reelected?”

After days of Trump contending that Biden was a tool of a radical movement sowing discord in American cities, Biden tried to put the president on his heels. Biden called on Trump to denounce all forms of violence and accused him of fanning unrest with streams of tweets, including some that seemed to support confrontations in the streets.

“The road back begins now, in this campaign. You know me. You know my heart, and you know my story, my family’s story,” Biden said in the speech, which was carried live on several cable networks. “Ask yourself: Do I look to you like a radical socialist with a soft spot for rioters? Really?”

He added, “I want a safe America — safe from Covid, safe from crime and looting, safe from racially motivated violence, safe from bad cops. And, let’s be crystal clear: Safe from four more years of Donald Trump.”

Biden spoke on the eve of Trump’s Tuesday trip to Kenosha, Wis., the site of deadly clashes and destruction after the shooting of Jacob Blake last week. The president is planning to meet with law enforcement officials, ignoring Democratic Gov. Tony Evers’ plea to stay away, lest Trump ratchet up tensions further.

Trump has claimed credit for bringing calm to Kenosha, even though it was Evers who initially deployed the National Guard. Some local Democrats, however, have complained that Biden took too long to denounce the violence. They fear that Trump’s law-and-order message might sway swing voters who want an end to the mayhem.

But Trump seemed to cede whatever ground he might have gained when he turned to social media and not only refused to condemn violence from some of his own supporters, but retweeted a video of his supporters attacking protesters. His spokesperson later said he hadn’t watched it.

Biden, in his speech, dared the president to reject violence perpetrated by his own supporters. Yet hours later at a White House briefing, Trump refused to do so, even when he was asked about his supporters shooting pepper spray and paint balls at protesters.

Biden’s Monday speech took on Trump directly in a way the Democrat had not during his convention speech two weeks ago, when he did not utter the president’s name. The Democrat called out Trump by name, insisting the president owned the violence in Kenosha, Portland and other American cities, after four years of fanning racial tensions. In doing so, he also defended the Obama administration’s record on crime.

After months of test-driving ways to brand Biden, Trump and his allies have settled on painting him as an unwitting instrument of socialists and left-wing radicals. They say Biden is too oblivious to understand he’s being exploited, and too weak to buck their orthodoxy in the rare times when he does.

But each time Trump has tried to tag Biden, the Democrat emerged with the upper hand and his lead in polls has grown.

The run-ins follow a familiar pattern. Trump bet that Biden could not defy growing calls from the left to defund the police. In response, Biden said he not only opposes defunding police but wants to spend more on law enforcement. Trump said Biden supports banning hydraulic fracturing. Biden said unequivocally he does not.

And Trump has repeatedly returned to the idea that Biden would refuse to condemn rioting so as not to offend liberal voters. But Biden has repeatedly denounced the people rioting, looting and setting fires to property.

“None of this is protesting — it’s lawlessness, plain and simple,” Biden said Monday.

When Trump took the podium at the White House later, he tried to blame Biden and his party for the violence wracking cities. But Trump refused to condemn all of the actors contributing to the chaos, including right-wing supporters of his campaign. He said the men wielding paintball guns were using the substance as “a defensive mechanism.”

“Paint is not bullets,” he said.

But when asked about Kyle Rittenhouse — the 17-year old charged with five felonies after shooting three people last week in Kenosha, two fatally — Trump said Rittenhouse was attacked so violently that he could have been killed.

“You saw the same tape as I saw and he was trying to get away,” Trump said. “It’s under investigation, but I guess he was in very big trouble. He probably would’ve been killed.”

Rittenhouse has been charged as an adult with two counts of first degree homicide and one count of attempted homicide.

Trump also said he declined to meet with the family of Blake because he was uncomfortable with their request to have lawyers present.

Trump has been highly critical of Biden for having not yet visited Wisconsin. Amid the pandemic, Biden moved his acceptance speech from Milwaukee to Wilmington, Delaware, citing safety concerns.

“Joe Biden has refused to travel to Wisconsin for over 670 days, so it should not come as a surprise that he is refusing to visit the Badger State and address the ongoing riots and violence,” said Trump campaign spokesperson Samantha Zager. “Despite claiming he would actually start campaigning for president, it’s clear Biden prefers to hide from his failed record and the Democrat failures to protect our cities.”

Biden is preparing for a more robust travel schedule after Labor Day but might visit Wisconsin later this week, according to the campaign.