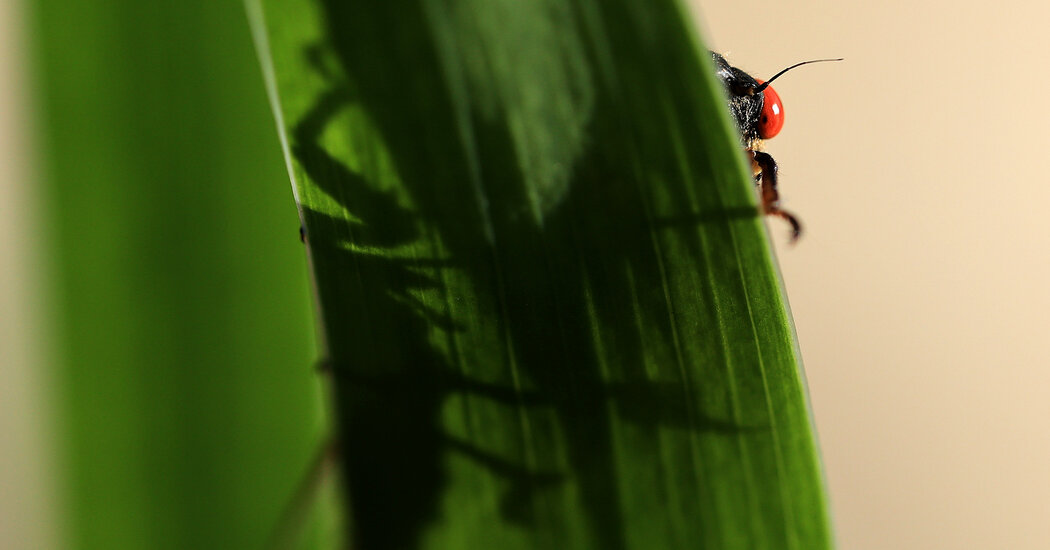 There are four periodical cicada broods currently in Long Island, all timed to emerge in different years. There as elsewhere, females lay their eggs in tree crevices. In midsummer, newly hatched nymphs crawl down the trunks, burrow into the soil, and find a root to suck on. There they grow larger, noting the changing seasons until 17 winters have passed — their cue to come back up.

Often, though, the world above is less patient. Roads and buildings can literally trap whole populations underground — one Long Island location where the insects once thrived is now “a Walmart with a big parking lot,” Dr. Simon said. Even before they find themselves sealed in by asphalt, the clear-cutting of trees they rely on for food generally dooms them. For this reason, they also find it hard to survive in places that have been turned into golf courses, playing fields and cemeteries.

In the past century, news outlets tracking Brood X’s impact on people on Long Island have also illustrated how land use there changed over time. In 1919, farmers in Farmingdale and Massapequa reported cicada damage to their fruit trees. Seventeen years later, in 1936, The Times warned motorists that the cicadas coming up from roadside forests might clog their radiators. By 1987, Long Islanders were quoted expressing wonderment — along with concern for their lawns — as the insects erupted from their yards.

Farmingdale and Massapequa “are no longer farmland and open space,” said Jody Gangloff-Kaufmann, an entomologist at Cornell University and a Long Island resident. “They’re just home after home after home.” Pesticide use and pollution might have contributed to the declines as well, she said.

Once numbers drop, the final blow can be dealt by predators — including introduced species, which often lack predators of their own and can throw food webs off balance. In 2016, Dr. Bonaros watched nonnative European starlings and English sparrows go after the dregs of Brood V, also disappearing from Long Island. “They really tear into them and demolish them,” he said.

As with insect declines more widely, experts still find some elements of Brood X’s depletion mysterious. For instance, Dr. Simon said she was unsure why it has largely disappeared from Connetquot State Park, which has been untouched by development.

But it’s probably the same combination of known and unknown factors that already drove two other Long Island broods, Brood I and Brood IX, to extinction before the 1980s. And based on its latest performance, Brood V, previously recorded closer to the island’s North Fork, may also fail to emerge in the near future, she said.