The 9/11 Trial: Why Are Plea Bargain Talks Underway? 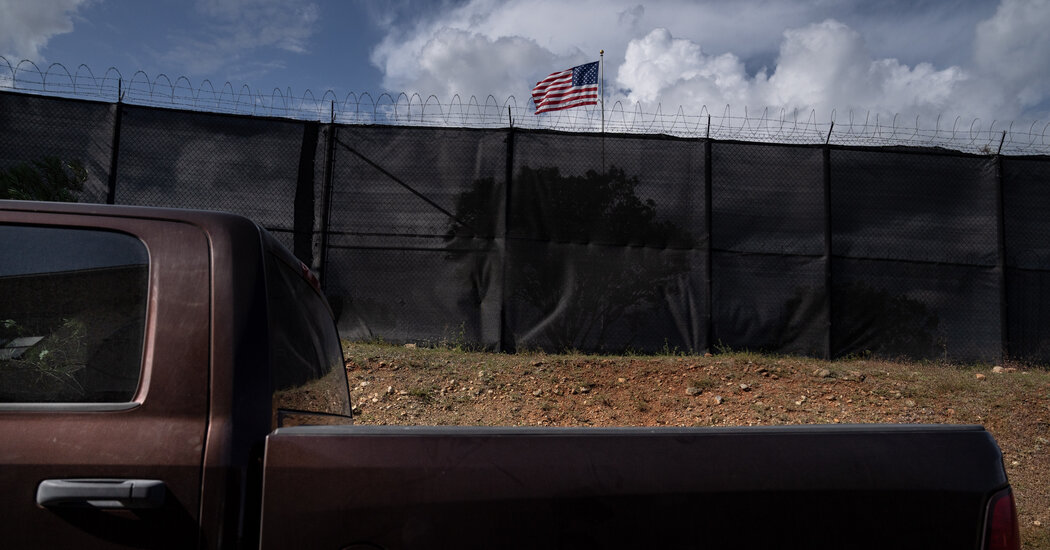 GUANTÁNAMO BAY, Cuba — Pentagon prosecutors have struggled for more than a dozen years to hold the death-penalty trial of Khalid Shaikh Mohammed, the accused mastermind of the Sept. 11, 2001, attacks, and his four co-defendants at Guantánamo Bay.

They have litigated everything from Mr. Mohammed’s choice of court attire — he sometimes dons a paramilitary camouflage vest — to how much evidence of C.I.A. torture the defense teams and, ultimately, a military jury should be allowed to see.

Now a trial prosecutor who has been on the case since the George W. Bush administration, Clayton G. Trivett Jr., is in talks with defense lawyers about trading guilty pleas for at most life in prison without parole.

Why are the two sides talking? Here is a rundown.

Between stalled litigation during the coronavirus pandemic and the pace of discovery and pretrial hearings, jury selection cannot start before mid-2024 — and that is according to the most optimistic estimate.

But that was before the death-penalty lawyer for one of the defendants, Walid bin Attash, asked to quit the case, creating a potential vacancy in a key position that must be filled unless prosecutors abandon their insistence on a joint, five-man trial.

The coronavirus has already forced a 500-day recess. An earlier judge, the third on the case, retired at the start of the pandemic. The current judge, Col. Matthew N. McCall, did not get the assignment until August because prosecutors considered him too inexperienced. He has since limited the pace of litigation while he learns the court record, including thousands of pages of secret prosecution filings.

Detention operations at Guantánamo Bay, which have held 780 men and boys as detainees, have lasted for four administrations. Mr. Bush established the prison and court system, and President Barack Obama overhauled the court with the goal of ending detainee operations. Congress thwarted him.

President Donald J. Trump maintained the operation, and promised to add new prisoners, but never did. His first attorney general, Jeff Sessions, was opposed to negotiations. In 2017, after Mr. Sessions learned that the senior Pentagon official overseeing the trial was discussing a plea with defense lawyers, he called Defense Secretary Jim Mattis and declared “no deal.” Mr. Mattis fired the overseer, Harvey Rishikof, citing other reasons.

President Biden came into office with the goal of ending detention operations at Guantánamo Bay.

A letter written by a lawyer at his National Security Council acknowledges that pretrial plea deals could be appropriate as a way to resolve some military commissions cases, but stresses that the White House takes no position on what should happen in any particular matter.

The long-running chief war crimes prosecutor, Brig. Gen. Mark S. Martins, retired from the Army in September. An even longer-serving case prosecutor, Robert Swann, left the case in late 2021. Relatives of some of the victims of the Sept. 11 attacks who have met the men — including those who oppose and favor the death penalty — describe them as solidly committed to bringing the case to a capital trial.

The new interim chief prosecutor, George C. Kraehe, an Army Reserve colonel, has delegated the authority to negotiate to three civilians, all Justice Department employees, who have been on the case since the beginning: Mr. Trivett, a Navy Reserve commander; Edward Ryan, a federal prosecutor; and Jeffrey D. Groharing, a Marine Corps Reserve colonel.

The defense teams have new leadership, too. Brig. Gen. Jackie L. Thompson Jr. of the Army took charge as the chief defense counsel in January and wrote Mr. Biden seeking support for resolving the case through pleas.

One of the nation’s leading and longest-serving capital defense lawyers, David I. Bruck, also made his first court appearance in the case in September.

Last year, a military jury’s condemnation of torture by the C.I.A. in another war crimes case raised questions of whether prosecutors could win a unanimous death-penalty decision even for Mr. Mohammed, 53, the accused architect of the hijackings plot.

In the case of Majid Khan, a confessed courier for Al Qaeda, U.S. military officers on his jury called his cruel treatment “a stain on the moral fiber of America” and urged the Pentagon overseer of the war court to grant the prisoner clemency. Mr. Khan was abused rectally and kept nude, sleep deprived and nearly starved in the same program of “enhanced interrogation” that tortured Mr. Mohammed, who was also waterboarded 183 times.

Charles Stimson, a retired Navy judge who managed detainee policy at the Pentagon for the Bush administration from 2005 to 2007, said recently that the Khan case illustrated that, even if prosecutors get the Sept. 11 defendants to trial and win a conviction, “the likelihood of their coming to a unanimous verdict with respect to the death penalty is close to zero.”

Negotiations are appropriate even for the “worst war crime that has been committed in our lifetime,” said Mr. Stimson, who is now a scholar at the conservative Heritage Foundation. “Any man or woman serving in the United States military who hears about the treatment that these detainees had at the hands of the United States government is going to weigh that quite heavily in the sentencing portion of the trial. And it won’t go over well.”

At first, court security officers briefed by the intelligence agencies forbade mention of the word “torture” in open court hearings.

A lawyer could not explain why the Saudi defendant Mustafa al-Hawsawi, 53, who is accused of helping the Sept. 11 hijackers with travel and expenses, sat gingerly on a pillow in court. In time, his lawyers were allowed to say he was sodomized by the C.I.A. during his detention in the black sites.

The more time has passed, the more grisly details about the program that held and tortured the defendants between 2002 and 2006 have emerged — despite claims by prosecutors for years that the defense teams had all the evidence they needed to prepare for trial.

But three of the presiding judges have ordered the disclosure of more and more information, often requiring permission of the C.I.A. or other intelligence agencies.

Since getting the case over the summer, defense lawyers say, Colonel McCall has ordered even more disclosures.

In those situations, if prosecutors invoke a national security privilege and refuse to provide the material, the judge can order remedies. He could suspend the case until the government turns over the information. He could dismiss the case. Or he could downgrade it by making life in prison the ultimate possible sentence

Lawyers for Mr. Mohammed’s nephew, Ammar al-Baluchi, 44, have long argued that the prisoner is brain damaged as a result of his torture by the C.I.A., and that he needs rehabilitation that the military at Guantánamo cannot provide.

His defense team recently submitted material to a federal court panel about a 2003 episode in which C.I.A. trainees were taught an enhanced interrogation technique called “walling.” They took turns slamming his head into a wall until he blacked out.

The health of the man accused of serving as a deputy to Mr. Mohammed in the Sept. 11 plot, Ramzi bin al-Shibh, 49, has also long clouded the case. At first, his claims that he was being sleep deprived by outside forces making noises and vibrating his prison cell interfered with his lawyers’ ability to craft a defense. In recent years, the problems escalated to him howling from sharp pinprick pains in his genitals and other body parts.

Last month, the U.S. military delivered to Saudi Arabia for psychiatric care a schizophrenic prisoner whose torture by U.S. forces long ago made him ineligible for the Sept. 11 conspiracy trial. That man, Mohammed al-Qahtani, was held at Guantánamo as the suspected would-be 20th hijacker for two decades, only to be recommended for release after a Navy doctor concluded he could not get proper care at the prison.

Be it distraction by the events in Ukraine or a sense that something has changed 20 years after the Sept. 11 attacks, few Republicans protested the decision to release Mr. Qahtani, leading some critics of the military prison in Cuba to suggest that Guantánamo has receded as a political rallying point.

“The Bush administration tortured the defendants and built a system to avoid the consequences of it,” said Scott Roehm, the Washington director of the Center for Victims of Torture. “That was never going to work.”

He called it noteworthy that, while a few Republicans made an impassioned defense of the need to keep Guantánamo open, none of them spoke up at a Senate Judiciary Committee meeting in December after the chief defense counsel at the time, Brig. Gen. John G. Baker, argued for the “negotiated resolution of the cases.”

“Much of the hearing was a discussion of plea deals,” Mr. Roehm said. “And nobody said: ‘This is crazy. Don’t do this. We object to a plea strategy.’ There wasn’t any pushback at all.”

Instead, Senator Lindsey Graham, Republican of South Carolina, offered a spirited defense of Guantánamo-style detention under the laws of war.

“I’ve never accepted the false choice of ‘try them or release them,’” he said. “You can hold somebody until they die as an enemy combatant if it’s unsafe to release them if the war is not over.”

“If we can try them, great,” said Mr. Graham, a retired Air Force JAG colonel. “If we can’t, let’s hold them.”