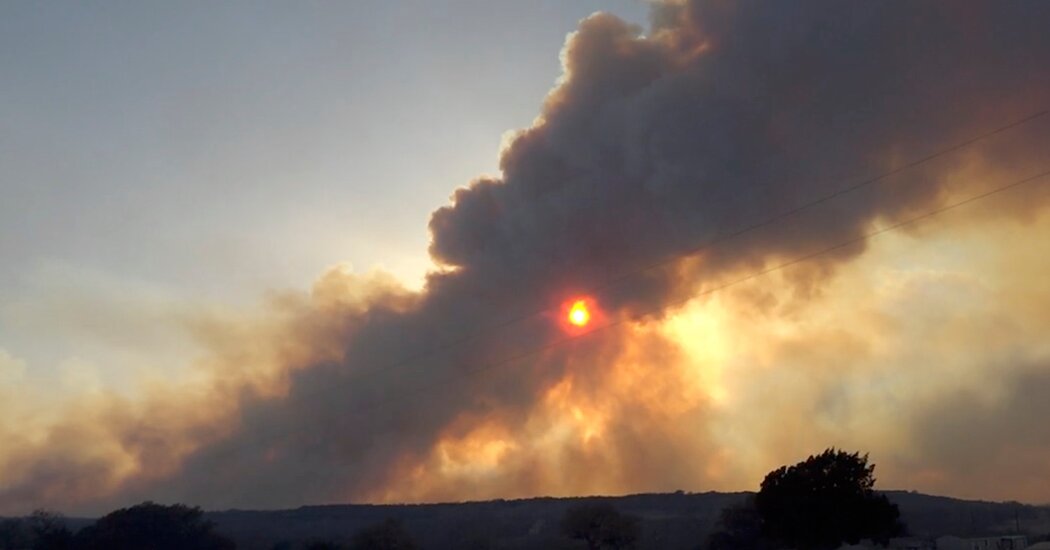 A fast-moving wildfire near Fort Hood, a sprawling military base in Texas, continues to grow in size but poses no threat to lives, homes or infrastructure, fire officials said.

As of late Monday, the Crittenberg Complex, which consists of three wildfires in Coryell County, Texas, has burned more than 33,000 acres and was 55 percent contained, the Texas A&M Forest Service said.

Grass and brush are the main fuel sources for the fire, according to a report by the fire tracker InciWeb. About 80 people have been assigned to fighting the fire.

While there are no evacuation orders currently in place, fire officials say residents in surrounding areas of Flat, Fort Gates and Gatesville should be prepared to leave.

The fire was not caused by controlled burns at Fort Hood but was more than likely from soldiers conducting live-fire training with small arms on weapons ranges or mortar training several days ago, military officials said on Twitter.

“Late last week, we thought we had things pretty well in hand,” but changes in wind conditions and hotter temperatures escalated the fire on Sunday, Col. Chad Foster, Garrison Commander at Fort Hood, said during a news conference on Monday.

In a span of about two hours, winds picked up and its direction changed, “which caused the situation to deteriorate quite a bit,” he said.

A red flag warning, indicating critical fire weather conditions, was in effect for a large portion of Texas on Tuesday, according to the National Weather Service. Other parts of the state were under a wind advisory.

While slightly higher relative humidity values were forecast Tuesday across South-Central Texas, winds up to 25 miles per hour with gusts up to 40 miles an hour were expected through the night.

“Fuels remain unusually dry, and this is leading to an active season of wildfires that are difficult to contain,” meteorologists said. “Any outdoor activity that could lead to the development of sparks and resulting wildfire potential is highly discouraged.”

“This is not going to be a 48-hour fire,” Mary Leathers, a spokeswoman for the Texas A&M Forest Service, said during the news conference on Monday. “This fire is going to last several days, if not weeks.”

Officials won’t leave the fire, she said, “especially with the conditions that Texas is experiencing right now.”

“So with that being said,” she continued, “people need to be vigilant out there and do what they can to reduce fire starts.”

Also this month, officials battled the Eastland Complex fire, burning in a region west of the Dallas-Fort Worth area. That fire killed at least one person and destroyed dozens of homes; it has burned nearly 55,000 acres and is 90 percent contained, officials said late Monday.