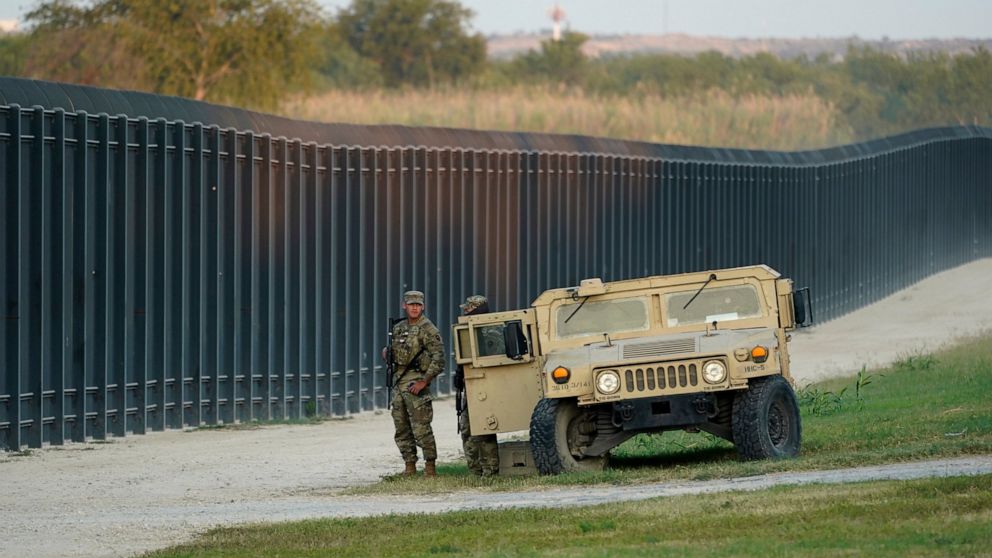 SAN ANTONIO — Texas Gov. Greg Abbott on Wednesday delivered new orders along the U.S.-Mexico border and promised more to come as former Trump administration officials press him to declare an “invasion” and give state troopers and National Guard members authority to turn back migrants.

The two-term Republican governor did not say whether he supports such a concept, which constitutional scholars say is legally dubious, nearly unprecedented and would almost certainly face swift court challenges.

But for now, Abbott said state troopers would begin stopping and inspecting commercial vehicles that come across the border, which he acknowledged would “dramatically slow” vehicle traffic near U.S. ports of entry. He also said bus charters to Washington, D.C., would be offered to migrants who volunteer for them, in a dig at President Joe Biden and Congress, who Abbott has criticized for not doing enough.

Abbott said the inspection stops would occur on Texas roadways and follow the law. “But of course, everyone always files a lawsuit,” he said.

The new directives amount to the “unprecedented actions” that Abbott promised in response to the Biden administration winding down a public health law – now set to expire in May – that has limited asylum-seekers in the name of preventing the spread of COVID-19. When that happens, it is expected to draw more migrants to the southern border.

Texas officials also said they would begin “increased military activity” on the border and install razor wire at some low-water along the river to deter migrants from crossing.

The orders further expand a multibillion-dollar Texas border security mission that Abbott, who is running for reelection in November, has made the cornerstone of his administration. Already, Texas has deployed thousands of troopers and National Guard members, installed new border barrier and jailed migrants on trespassing charges.

Still, the efforts do not go far enough for some former Trump administration officials, who want Abbott to essentially bestow on troopers and Guard members enforcement powers that have been a federal responsibility.

Border Patrol officials say they are planning for as many as 18,000 arrivals daily once the health policy, known as the Title 42 authority, expires in May. Last week, about 7,100 migrants were coming a day to the southern U.S. border.

But the way former Trump immigration officials see it, Texas and Arizona can pick up where the federal government leaves off. Their plan involves a novel interpretation of the U.S. Constitution to have the National Guard or state police forcibly send migrants to Mexico, without regard to immigration laws and law enforcement procedures. Border enforcement has always been a federal responsibility, and in Texas, state leaders have not been pushing for such a move.

Tom Homan, the former acting director for Immigration and Customs Enforcement under Trump, told an audience in San Antonio last week that he had spoken with Abbott about the idea.

“We’ve had discussions with his attorneys in his office, ‘Is there a way to use this clause within the Constitution where it talks about invasion?’” Homan said during the Border Security Expo.

Homan said those talks took place about three months ago and described the governor’s office as “noncommittal but willing to listen.”

In Arizona, Republican Gov. Doug Ducey has also been under pressure within his party to declare that the state is being invaded and use extraordinary powers normally reserved for war. But Ducey, who is term-limited and not on the ballot in 2022, has not embraced the theory and has avoided commenting directly on it.

Driving the effort on the right is the Center for Renewing America, a conservative policy think tank led by former Trump administration officials. It includes Ken Cuccinelli, an immigration hard-liner and former Homeland Security official under Trump. He argued states are entitled to defend themselves from immediate danger or invasion, as it is defined by the “invasion clause,” under the “states self-defense clause.”

Cuccinelli said in practice, he envisions the plan would look similar to the enforcement of Title 42, which circumvented U.S. obligations under American law and international treaty to provide asylum. He said he has not spoken with Abbott and said the current Texas border mission, known as Operation Lone Star, has put little dent in migration. The mission has also drawn criticism from Guard members over long deployments and little to do, and some arrests have appeared to have no connection to border security.

“Until you are actually returning people to Mexico, what you are doing will have no effect,” Cuccinelli said.

Emily Berman, who teaches constitutional law at the University of Houston, said the “invasion clause” cited by proponents is tucked into a broader constitutional assurance that the U.S. must defend states from invasion and domestic violence. Additionally, she said, the “state self-defense clause” says states cannot engage in warlike actions or foreign policy unless invaded.

Berman said she hasn’t seen the constitutional clauses used since the 1990s, when the courts ruled that they did not have jurisdiction to decide what qualified an invasion, but believed that one could only be done by another governmental entity.

For example, Berman said, the invasion of Ukraine by Russia can be qualified as one because it is an outside government breaching another country’s boundaries with the use of military force.

“Just because the state says that it is an invasion that doesn’t necessarily make it so, it is not clear to me what additional legal authority that conveys on them,” Berman said, adding that state officials can enforce state laws, but the line is drawn at what the federal law allows.

U.S. Rep. Henry Cuellar, a Democrat whose district includes the Texas border, has criticized the Biden administration over border security and ending Title 42. But he does not support states trying to use new powers that would let them “do whatever they want.”

“I think it should be more of a partnership instead of saying, ‘Federal government, we don’t think you’re doing enough, and why don’t we go ahead and do our own border security?’” he said.