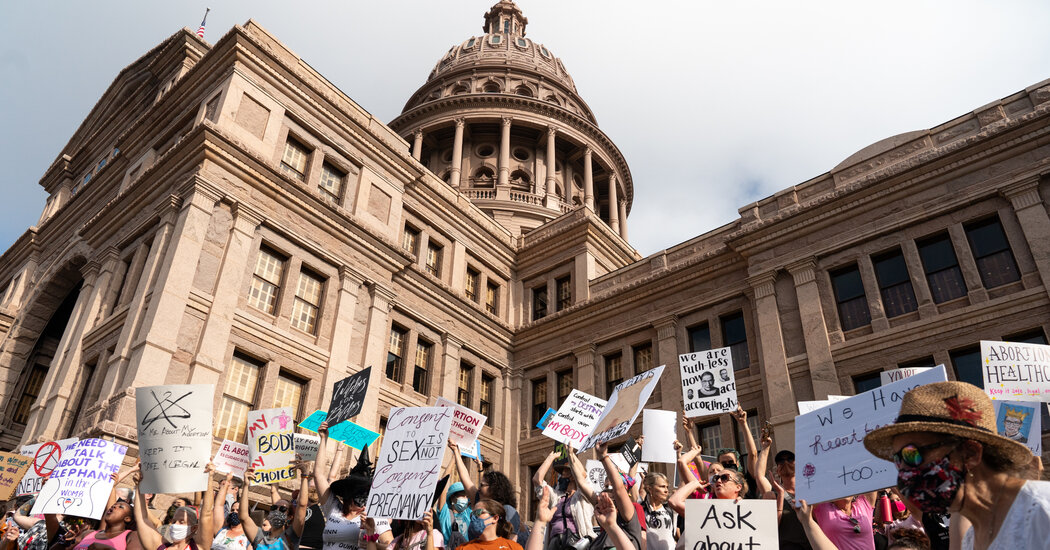 The Texas Supreme Court on Friday effectively shut down a federal challenge to the state’s novel and controversial ban on abortion after about six weeks of pregnancy, closing off what abortion rights advocates said was their last, narrow path to blocking the new law.

The decision was the latest in a line of blows to the constitutional right to abortion that has prevailed for five decades.

The Texas law, which several states are attempting to copy, puts enforcement in the hands of civilians. It offers the prospect of $10,000 rewards for successful lawsuits against anyone — from an Uber driver to a doctor — who “aids or abets” a woman who gets an abortion once fetal cardiac activity can be detected.

It is the most restrictive abortion law in the nation, and flies in the face of the Supreme Court’s landmark 1973 decision in Roe v. Wade, which prohibits states from banning the procedure before a fetus is viable outside the womb, which is currently about 23 weeks of pregnancy.

By empowering everyday people and expressly banning enforcement by state officials, the law, known as S.B. 8, was designed to escape judicial review in federal court. Advocates of abortion rights had asked the Supreme Court to block it even before it took effect last September. The justices repeatedly declined, and said that because state officials were not responsible for enforcing the law it could not be challenged in federal court based on the constitutional protections established by Roe.

But the Supreme Court left open the smallest of windows, saying in December that opponents of the law could file suit against Texas medical licensing officials, who might discipline abortion providers who violate the law.

On Friday, the justices of the Texas Supreme Court, all Republicans, said that those officials did not, in fact, have any power to enforce the law, “either directly or indirectly,” and so could not be sued.

The justices said the law had effectively tied their hands. They agreed that the state’s licensing officials had the authority to discipline providers for violating other abortion restrictions. “But we conclude that the Heartbeat Act expressly provides otherwise,” the court said, using the title of S.B. 8.

“The act’s emphatic, unambiguous and repeated provisions” declare that a private civil action is the “exclusive” method for enforcing the law, the justices wrote. They added, “These provisions deprive the state-agency executives of any authority they might otherwise have to enforce the requirements through a disciplinary action.”

“We cannot rewrite the statute,” the justices wrote.

“With this ruling, the sliver of this case that we were left with is gone,” said Nancy Northup, the president of the Center for Reproductive Rights.

“This measure, which has saved thousands of unborn babies, remains fully in effect, and the pro-abortion plaintiffs’ lawsuit against the state is essentially finished,” he wrote on Twitter.

Abortion rights supporters and legal scholars said the Texas law would encourage other states not only to pass similar bans on abortion, but to attempt to nullify other precedents they oppose.

The law allows no exceptions for abortion even in the case of women who have been raped or are victims of incest. It has thrown Texas abortion providers into crisis, and similar legislation is pending around the country.

The Supreme Court is considering a Mississippi law that bans abortion after 15 weeks of pregnancy, and in oral arguments in December, the six conservative justices on the court appeared inclined to uphold that law.

Several justices indicated that they would vote to overturn Roe v. Wade outright, as Mississippi has asked. And lawyers for abortion rights groups argued that even if the court only upholds the Mississippi law, it would effectively overturn Roe because of its central holding on viability.

Already, state legislatures are advancing bans on abortion as if Roe were overturned. Some have passed outright bans on abortion that are to take effect immediately if the court rules to overturn Roe even “in part,” and others have prepared to ban the procedure at six, 10, 12 and 15 weeks.

The most restrictive in the country. The Texas abortion law, known as Senate Bill 8, amounts to a nearly complete ban on abortion in the state. It prohibits most abortions after about six weeks and makes no exceptions for pregnancies resulting from incest or rape. The law has been in place since Sept. 1.

“The combination of the U.S. Supreme Court and Texas Supreme Court rulings on this unique law means that other states are going to see this as a way to insulate their own laws from judicial review,” said David S. Cohen, a law professor at Drexel University.

The innovations of the Texas law — its civilian enforcement and bounty system — could be adapted to shield other kinds of laws, including ones making it a crime to travel to another state for an abortion or to obtain abortion drugs in the mail, said Mary Ziegler, a law professor and historian at Florida State University. Tennessee lawmakers have proposed a bill allowing civilian enforcement of a ban on the delivery of abortion pills.

“If conservative states want to do things that may not look constitutional even to this Supreme Court, they can use a bounty system to achieve that,” Professor Ziegler said. “The message sent by the Texas litigation was that if you have concerns that you might lose a constitutional challenge, that shouldn’t hold you back. Because you can use this road map to keep the case out of federal court entirely.”

Kimberlyn Schwartz, a spokeswoman for Texas Right to Life, said abortion opponents believed they were seeing real gains after decades of chipping away at the constitutional right to an abortion.

“We’ve known that this lawsuit all along was just invalid and should have been dismissed, and now the fact that we’re on that trajectory now is encouraging,” Ms. Schwartz said, adding that the movement “is not going to let our foot off the gas yet.”

Amy Hagstrom Miller, the chief executive of Whole Woman’s Health, the clinic that sued to stop S.B. 8, said “the courts have failed us.”

“This ban does not change the need for abortion in Texas, it just blocks people from accessing the care they need,” she said. “The situation is becoming increasingly dire,” she said, as the surrounding states pass their own restrictions.

Data released in February shows that the Texas law cut the number of abortions in the state by 60 percent. Planned Parenthood clinics in neighboring states have reported an 800 percent increase in women seeking abortions. But that avenue, too, is likely to close soon.

Many women have traveled to Oklahoma for the procedure, but this week the State Senate passed its own six-week ban modeled on the Texas law. The Idaho Senate passed a similar law last week. Lawmakers in other states have proposed similar bans, but have held off in hopes that the Supreme Court decision, expected in June, will allow them to ban abortion entirely.