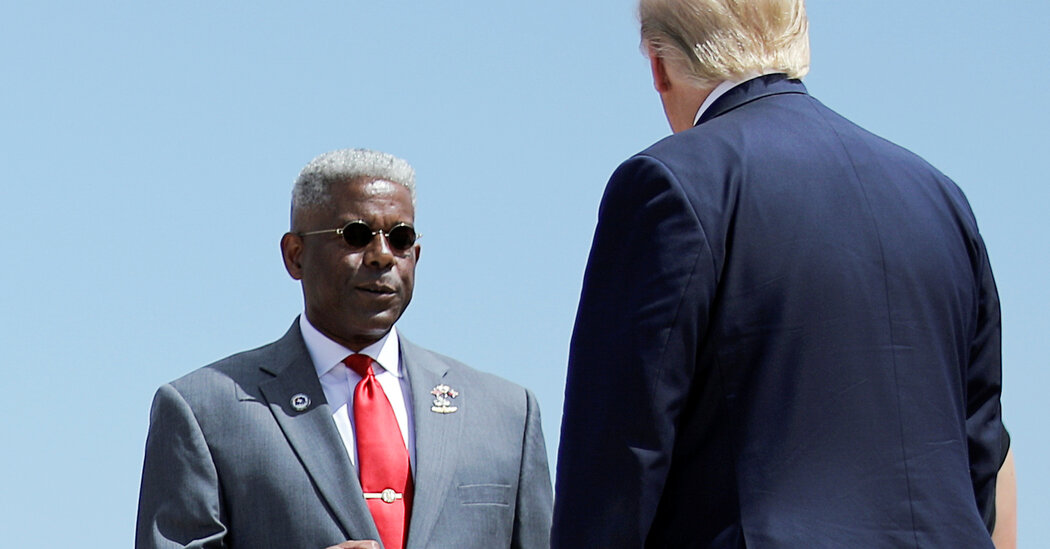 Facing questions about its use of the slogan “We Are the Storm,” a rallying cry for QAnon adherents, the Texas Republican Party is defending its adoption of the language, saying it was drawn from a poem and had nothing to do with the internet-driven conspiracy theory that claims President Trump was elected to save America from pedophile Satanists.

The state party was responding to a report in The New York Times on Thursday about how a small but growing number of Republicans nationwide have signaled support for QAnon, a movement that the F.B.I. has warned could inspire domestic terrorism. The Texas Republican Party’s use of the slogan was cited by some prominent Republicans there as an example of how some in the G.O.P.’s leadership are opening the party to QAnon followers by adopting language used by the movement..

In a statement posted on its website Friday after the article’s publication, the state party said that the slogan came from a favorite poem of the party’s new chairman, Allen West, and that the line had biblical roots.

It is “one of Chairman West’s favorite quotes to use in speeches,” the party said. “He and the entire Texas G.O.P. will not be bullied by partisan leftists in the media into ceding powerful phrases with biblical roots — taken from Psalm 29 — to internet conspiracy groups.”

Psalm 29 includes a line about thunder but not the word “storm.” The poem includes the line “I Am the Storm.” Its origins are unclear; it appeared on an Instagram post in 2018 by Tom Brady, then the New England Patriots quarterback, and can be found on a website about scripture and culture.

Neither party officials nor Mr. West responded to a question on Saturday about whether they believed that the use of the slogan could be taken by QAnon supporters as a signal of support from Texas Republicans. Instead, Mr. West said that questioning how the party came to use the slogan was “a pure example of the leftist embrace of racism.”

“It’s offensive and condescending that white, liberal, progressive socialists would expect me to respond to their demand to know how long I have said something,” he said in a written statement released on Saturday in response to The Times. “It is obvious that as a strong, conservative Black man, I am not allowed to think or speak.”

Regarding QAnon, Mr. West was quoted by KXAN, the local NBC News affiliate in Austin, as saying this month, “I don’t know about anybody else, and I’m not into internet conspiracy theories.”

Messages from the Trump campaign and its surrogates have at times dovetailed with the language and images favored by QAnon followers, and have been used similarly by the White House and state and local party officials around the country. At least a dozen Republican congressional candidates, including one heavily favored to win in Georgia, have espoused some degree of support for the conspiracy theory’s false claim that a “deep-state” cabal of pedophile Satanists led by powerful Democrats is working to take down Mr. Trump.

Mr. Trump himself praised QAnon followers at a news conference last week, describing its adherents — some of whom have been charged with murder, domestic terrorism and planned kidnapping — as “people that love our country.”

QAnon supporters were ecstatic about the comments from Mr. Trump, who until now had dodged questions about the conspiracy theory even as he regularly retweeted some of its followers. Facebook groups used by QAnon adherents, and more obscure message boards where they congregate on websites like 8kun, lit up with users who said they heard in Mr. Trump’s comments confirmation of their belief that he had been sending them coded messages of support since the conspiracy originated in 2017.

The QAnon use of the slogan, “We Are the Storm,” grew out of one of those purported messages from Mr. Trump. In 2017, he quipped during a photo op with generals: “You guys know what this represents? Maybe it’s the calm before the storm.”

Since then, the catchphrase has become a main rallying cry for QAnon believers. They use it to refer to what they claim is a coming conflagration between Mr. Trump and his enemies.

The Texas Republican Party adopted the slogan in late July after Mr. West, a former Florida congressman, was elected as its new chairman. It was soon plastered on the party’s emails and messages, and on T-shirts, hats and sweatshirts that it sells.

The new slogan alarmed some prominent members of the state party, who saw it as a barely coded signal to QAnon followers that they had a home in the G.O.P. In interviews, more than a half-dozen current and former party members, some of whom had served in senior roles within the party, shared their concerns, describing a party that was increasingly dominated by far-right ideologues.

Some in the party, the party members said, shared the QAnon belief about the government being dominated by pedophiles, and others were more than willing to court the conspiracy theory’s followers if it meant keeping Democrats from making gains in elections this November.

“This iteration of the G.O.P. is not a facts-based party,” said Chris Ford, who voted for Mr. Trump in 2016, though he did serve as a “never Trump” delegate to the Republican National Convention that year.

“Misinformation runs rampant through the members,” he added. “It is a far right-wingers party right now. Others have left or stay silent.”