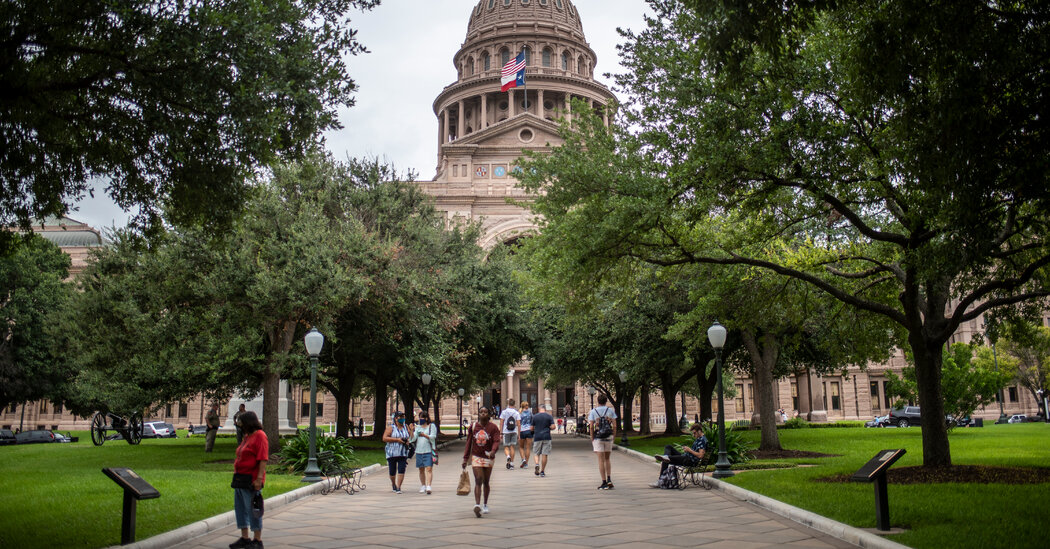 WALLER COUNTY, Texas — At a roadside bar on farm road 359, where the sprawl of Houston gives way to horse stables and hay rolls, Cindy Schmid and her friend Gail Mikeska gather every Thursday to eat, drink and talk about everything: family, country music, the hard right turn of Texas politics.

“We think very differently politically,” said Ms. Mikeska, a conservative who owns more than one gun and is generally happy with the trajectory of the state.

“I’m a Democrat,” said Ms. Schmid, whose only gun is an inoperable Civil War antique. “I think Texas is losing its freaking mind.”

In the span of a few months, the nation’s second most populous state followed what was perhaps the most conservative legislative session in state history with a special session packed with even more of the prerogatives of the right flank, a pronounced political shift that has caught even many conservative residents off guard. The Legislature is set to convene another special session Monday to consider further laws on cultural issues, such as transgender athletes, and to redistrict the state, likely in favor of Republican members.

The new laws, which passed with surprising speed, restrict abortion, voting rights and the teaching about race in schools. They also expand gun rights, fund a border wall with Mexico and prohibit bans on social media because of political opinions. The moves cheered conservatives, alarmed liberals and forced Texans to wrestle with their state’s identity as the tip-of-the-spear for conservatives in the nation’s most contentious social conflicts.

Add to that a surge in coronavirus cases and an ongoing tug of war over the pandemic response between Gov. Greg Abbott, a Republican, and Democratic leaders in growing urban centers, and the mood among many Texans has turned glum. For the first time in more than a decade, a majority of residents told pollsters from the University of Texas last month that the state was heading in the wrong direction.

“Texans are watching their state government that is consumed with these partisan debates over abortion and election reform, but they’re actually living in a state where schools can’t give clear safety guidance on Covid,” said Joe Straus, a San Antonio Republican who served as the speaker of the Texas House until 2019. “The concern is that the conservative faction has gone too far and is damaging our state’s reputation.”

None of that has slowed the momentum among conservatives, led by Mr. Abbott and the lieutenant governor, Dan Patrick, who oversees the staunchly right-wing Texas Senate. Both remain more focused on appealing to their own primary voters than to the shifting demographics of the state’s rapidly growing Democratic cities.

For a new special session of the House starting next week, the governor has added legislation that would restrict the participation of transgender athletes in school sports, a late addition to a session focused on redistricting.

The Republican-controlled Legislature will redraw boundaries for the first time since the Supreme Court gutted provisions of the 1965 Voting Rights Act that provided federal oversight.

In the past, Texas had been found in violation of the act during redistricting, and Democrats fear that Republicans will use the opportunity to redraw districts in a way that blunts the influence of the state’s growing Black and Hispanic populations, maintaining control in the Capitol for rural white legislators in a state that is increasingly more diverse. The process could extend the Republican lock on the state for at least another decade, at a time when statewide and presidential races in Texas have been growing more competitive.

“The Republican Party should be very, very optimistic about the ’22 cycle,” said Ray Sullivan, a Republican political consultant who served in the administrations of two recent governors, George W. Bush and Rick Perry. “The vaunted blue wave from 2020 never happened, and P.S., the Democrats don’t even have a candidate for governor.”

Though conservatives have controlled policymaking in the Texas Capitol since the early 2000s, the legislation from Austin this year was notably more divisive, aimed at the Republican Party’s base of voters, according to lawmakers and political consultants on the left and the right.

Many attributed the lurch to the ultraconservative primary challengers taking on Mr. Abbott. Some complained that the tradition of comity and compromise in the Capitol had all but gone away, leaving Austin — where Democratic and Republican lawmakers still sit intermingled, without a dividing aisle — feeling no less partisan than Washington.

Mr. Patrick, who presides over the State Senate, has been unabashed in his partisan stewardship, altering the body’s rules for the 2021 session so that bills could be introduced with 18 senators voting in favor — the exact number of Republicans in the Senate — rather than 19, after one Republican lost his seat. The reason for the change, he said in a statement last year describing his plan, was so that he could get a bill to the floor “without Democrats blocking it.” It passed along partisan lines.

Others on the right felt the raft of conservative legislation was the expected result of a strong showing by Republicans in 2020, when Democrats spent heavily to try to take over the House and failed to gain a single seat.

Republicans then rolled over their Democratic colleagues, whose dramatic flight to Washington to protest a restrictive new voting bill failed to stop its passage.

Exactly 666 new laws went into effect on Sept. 1, including a ban on abortions after cardiac activity is detected, or roughly six weeks into pregnancy, a measure that has stopped nearly all abortions in Texas and is the most restrictive in the nation.

Matt Mackowiak, a conservative political consultant and the chair of the Travis County Republican Party, said the rightward lurch had less to do with Mr. Abbott fearing a primary challenge from “ankle biters, mouth breathers — fundamentally unserious people not running serious campaigns” than with the governor’s own politics. “Greg Abbott is a conservative, full stop,” he said.

Citizens, not the state, will enforce the law. The law effectively deputizes ordinary citizens — including those from outside Texas — allowing them to sue clinics and others who violate the law. It awards them at least $10,000 per illegal abortion if they are successful.

“Democrats don’t have anyone to blame but themselves,” he added. “If they wanted to stop this agenda, they needed to win a majority in the Texas house. They didn’t do that.”

The experience has left some Democrats demoralized, particularly in Waller County, a Republican-dominated rural area just outside Houston that has a history of attempts to limit voting by Black residents.

“A lot of youth do get discouraged, that you do all this hard work, and this is what you get,” said Kendric Jones, 25, the only Black member of the Waller County commissioners court. “Politics is supposed to be about compromise, and right now there’s no compromise going on in the state of Texas.”

The town of Prairie View, which Mr. Jones represents, has long been at the center of heated battles over voting rights that have pitted students at Prairie View A&M University, a historically Black college, against the predominantly white county leaders. A main thoroughfare in town is named for Sandra Bland, a 28-year-old African American woman who was pulled over in 2015 for failing to signal a lane change and was arrested just outside campus, where she was to start a new job. She hanged herself in the county jail.

The arc of that history is not immediately evident under the school’s verdant live oaks, some of which date back to the days when a plantation house dominated the rural landscape.

But for Frank Jackson, 72, the former mayor of Prairie View, the state’s history was key to understanding what was happening this year in Austin. “You’re seeing the crest of a wave. But you’ve got to see the water behind the wave,” he said, adding that he was not surprised at the rightward turn. “You expect it. You’re not surprised. You say, ‘OK, here we go again.’”

Mr. Jackson attended the university when it was so poorly funded, he said, that the students parked in mud fields. On an afternoon last week, he looked at the students hustling to class along wide bucolic paths and saw each as a “target” of political moves, particularly a new law aimed at limiting how race is discussed in schools.

“You’ve got these people who are concerned that these folks in Texas will get their memory back, and start to really vote their conscience,” Mr. Jackson said.

At the other end of the county, down Farm to Market Road 359, a smattering of regulars talked abortion politics during happy hour at the Thirsty Parrot, a cavernous bar that attracts Harley-Davidson riders on weekends.

The tavern’s owner, Susan Easter, identified herself as anti-abortion and said she was untroubled with politics in the state. Still, she said, her main issue was property taxes. “That’s a big thing for senior citizens,” said Ms. Easter, 66. “Not so much the abortion law.”

She agreed with Jason Powers, an oil industry worker who sat at the bar in a straw cowboy hat, that more needed to be done to prevent people from illegally crossing the border from Mexico. But Mr. Powers, 45, said he had reservations about the state’s new abortion law, which has been contested by the Department of Justice. A hearing before a federal judge in Austin is scheduled for Oct. 1.

“I am a conservative, but the first heart beat, that doesn’t sit well with me,” said Mr. Powers, adding, “It’s big government stepping in again. It’s like, y’all need to slow down.”