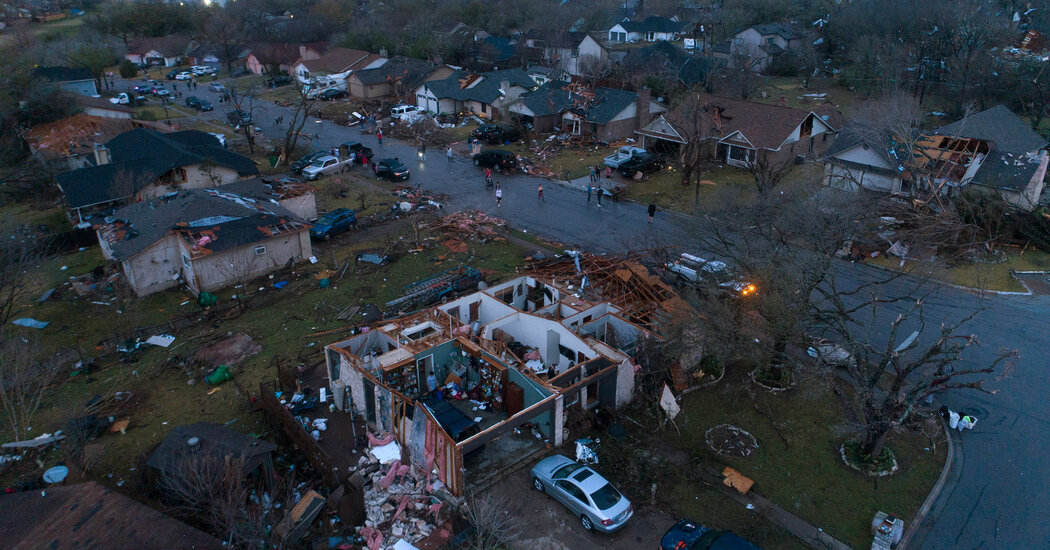 The winds seriously damaged a school in north-central Texas.

“There’s no roof left,” Starla Sanders, the principal of Jacksboro High School, told the local television station WFAA. The school ended “a little bit early” so students could get home safely, and no injuries were reported, Ms. Sanders said.

She said she had heard reports that her home had been damaged, too. “I haven’t been out there,’’ Ms. Sanders added. “The road’s blocked, but that’s what people say — that there’s not much left of my own house.”

About 14 million people across central and eastern Texas were facing an enhanced risk of severe thunderstorms on Monday, including the cities of Arlington, Dallas, Plano, Fort Worth and Houston, according to the Storm Prediction Center at the National Weather Service.

A larger area that carried a slight risk of thunderstorms covered several million more people and reached to western Louisiana, the southwest tip of Arkansas and the southernmost portion of Oklahoma. There were no reports of deaths or injuries as of 8:30 p.m. Texas time, said Wes Rapaport, spokesperson for the Texas Division of Emergency Management.

Portions of Texas could receive up to four inches of rain through Tuesday evening, with some areas receiving more rain along with possible street flooding, the Weather Service in Houston said.

While there was uncertainty about the timing of the storms and which areas would receive the heaviest rain, meteorologists told residents to prepare.