Texas Governor Targets Migrants in Anticipation of Influx at Border 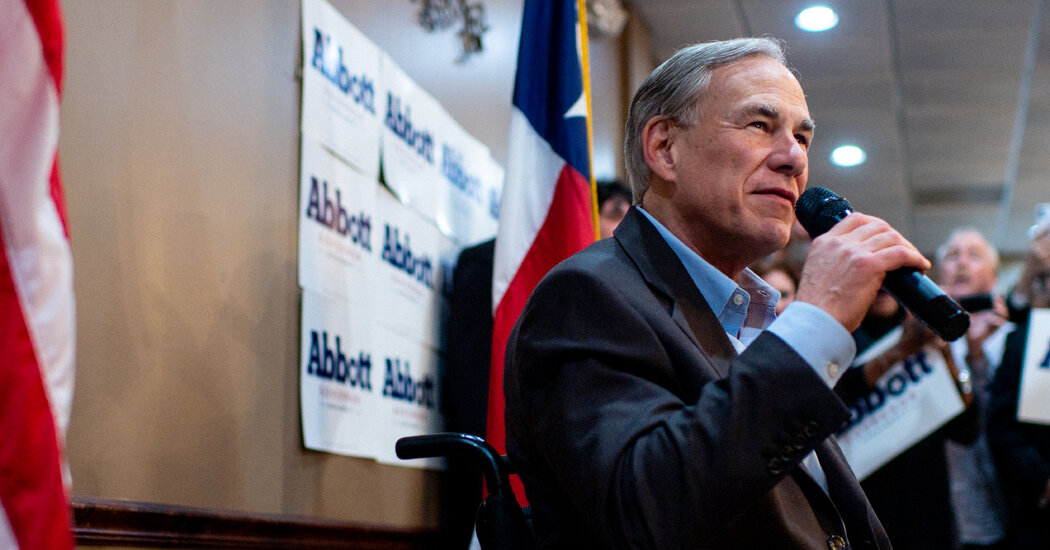 HOUSTON — Gov. Greg Abbott said on Wednesday that Texas would set up checkpoints to stop commercial vehicles coming from Mexico and would charter buses to bring migrants released by federal agents north to Washington, ushering in a new phase in an increasingly pitched political clash over immigration policy.

The tug of war over border policy has been politically advantageous for the governor in his re-election campaign, his political aides have said, and reflects real concern among Texas officials and voters that not enough has been done to address the surging number of migrant encounters at the border.

The twin imperatives — security and politics — were on display in a news conference as Mr. Abbott lashed out at the Biden administration and promised that the first migrants who agreed to be bused from Texas to Washington would be dropped at the doorstep of federal lawmakers.

“The first location” for drop-off, he said, “will be the steps of the United States Capitol.”

Since President Biden took office, Mr. Abbott, a Republican who is running for his third term in November, has sought ways to increase the involvement of Texas law enforcement along the border, engaging in a broad expansion of state efforts to stop and, in some cases, arrest migrants.

Mr. Abbott’s announcement on Wednesday took those efforts further and, he said, was only one part of the state’s response to a change in federal policy that is expected to bring an increase in migrants arriving at the border.

National Guard troops, he said, would begin “mass migration rehearsals” this week, including with riot gear, to prepare for an influx of the type that overwhelmed officials in Del Rio last fall. The troops, along with state police, would also create “boat blockades” in areas of the Rio Grande, officials said.

The moves by Texas come as the Biden administration is preparing to end a Trump-era policy initiated during the coronavirus pandemic in which migrants were turned away at the border under an emergency public health order known as Title 42. The Centers for Disease Control and Prevention has said the order would be lifted in late May.

The order, which allows federal immigration officials to turn away migrants, including those seeking asylum, has been used roughly 1.7 million times to expel migrants over the past two years.

Federal officials expect that the lifting of the order could result in thousands of migrants arriving daily at the southern border, which has already seen a significant rise in illegal crossings.

While the federal government enforces immigration law, Mr. Abbott has found ways to insert the state into immigration matters. Last year, he directed state police to begin an unusual program of arresting migrants caught on private land with misdemeanor trespassing. Thousands were detained, with some waiting months for court hearings.

The checkpoints follow a similar model, making novel use of a state law enforcement function — commercial vehicle safety inspections — to stop those arriving from Mexico. It was not immediately clear when the checkpoints would be established or how many would be involved.

“This is going to dramatically slow traffic from Mexico into Texas,” Mr. Abbott said.

Officials said that those who volunteered to be bused to Washington by the state would be migrants who had been released from federal custody into the United States.

“They’ve been dumping large numbers of migrants in cities up and down the border,” he said of the federal government. Officials in those cities, he added, have already been placing some migrants on buses to San Antonio.

“So I said I’ve got a better idea: As opposed to busing these people to San Antonio, let’s continue the ride all the way to Washington, D.C.,” Mr. Abbott said.

Former Representative Beto O’Rourke, the Democratic candidate for governor, was not impressed.

“If Abbott focused on solutions instead of stunts, then Texas could have made some real progress on this issue over the last seven years.”

Officials presented few details about how their plan would work. Asked at the news conference how many buses would be used, the head of the Texas Division of Emergency Management, W. Nim Kidd, could not say. “We will use as many buses as necessary,” Mr. Kidd said.

A spokesman for the department said that the number of buses needed would depend on requests from local officials, and that migrants could be taken to other areas outside of Texas, not only Washington.

The effort echoed a bill introduced last year by Senator Ted Cruz, a Republican, to send migrants arriving in South Texas to Democratic states in the Northeast and in California.

“These are families escaping desperate poverty, ruthless violence and life-threatening situations,” she said. “They could contribute greatly to Texas if they were welcomed, like Texans are supposed to do.”

Mr. Abbott has also built miles of fencing and other barriers and deployed thousands of National Guard members along the border, a mission that is expected to cost $2 billion annually. The leaders of the Texas Military Department said this week that the effort, which began last year, had been costlier than anticipated and that they would need an additional $500 million to keep it running.

But the governor has faced pressure from some conservatives to go further and declare an “invasion” under a clause in the U.S. Constitution that proponents believe would give Texas officials the authority to turn back migrants arriving at the border.

Mr. Abbott denied he had plans to do so when asked at the news conference, but added that “there will be more announcements next week.”

“Texas is evaluating every tool that we can possibly use,” he said.