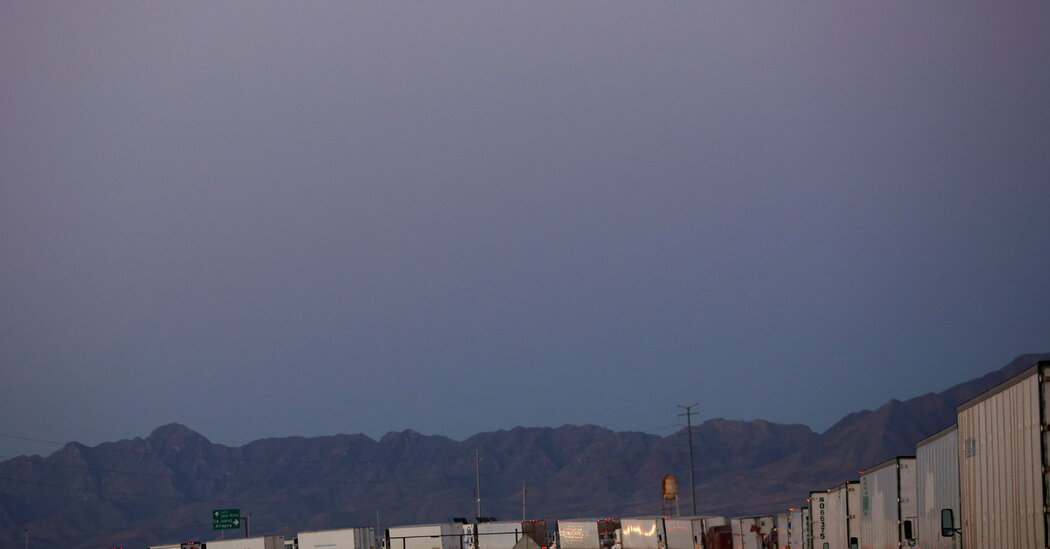 Facing an intensifying backlash from political parties and business groups, Gov. Greg Abbott of Texas on Friday ended his policy of inspecting all commercial vehicles crossing into the state from Mexico, a time-consuming process that had caused traffic jams of 14 hours or more at the border.

Mr. Abbott said his decision came after an agreement with the governor of the Mexican state of Tamaulipas, who flanked him at a news conference on Friday, to step up security measures on the Mexican side of the border at ports of entry and along the Rio Grande.

Earlier in the week, Mr. Abbott said the safety inspections, which began on April 6, were part of a concerted effort to force Mexican officials to do more to stop the flow of migrants into the United States. He said on Wednesday that he would end the inspections at one entry point — the bridge between Laredo and the Mexican city of Colombia, Nuevo León — only because the governor of that state had agreed to increase border security on the Mexican side.

On Friday, Mr. Abbott said he now had agreements in place with the governors of all four Mexican states bordering Texas to enhance security. He left open the possibility of reissuing a similar policy if crossings increased.

“If those crossings resume or increase, it will signal that cartel-supported crossings have increased and that Texas must reinstate the more stringent vehicle inspection standard,” Mr. Abbott said, adding that the Texas Department of Public Safety, for now, could return to conducting random searches of vehicles crossing into Texas.

The policy was crafted amid a broader battle Mr. Abbott is waging against the White House on immigration. The arrival of migrants is expected to increase sharply next month with the Biden administration’s plan to end a Trump-era pandemic policy in which a majority of unauthorized migrants are turned away at the border under an emergency public health order known as Title 42.

Mr. Abbott, a two-term Republican up for re-election in November, had presented the inspections as a means of addressing the anticipated effects of that policy’s termination. Thousands of additional migrants are expected to seek asylum across the border each day — most of them crossing into Texas.

Mr. Abbott strongly opposes some of the Biden administration’s moves to ease Trump-era restrictions on immigration. But because the federal government alone has authority over such matters, Mr. Abbott has sought novel strategies to insert the state into immigration enforcement, such as arresting migrants for misdemeanor trespassing. The vehicle inspections were part of that effort. A carefully constructed policy was aimed at smugglers and migrants but carried out under powers available to the state — namely vehicle safety.

But a chorus of voices — including politicians from both parties, business and trade groups, and U.S. Customs and Border Protection — urged the governor to rescind the policy because of its effect on individuals and the broader economy at a time when the supply chain was already strained.

In a news release on Tuesday, Customs and Border Protection said delays were being felt at major commercial crossings into Texas as a result of “additional and unnecessary inspections” by state police, leading to a drop in commercial traffic of up to 60 percent.

“The strength of the American economy relies heavily on the efficient flow of cross-border commerce,” the agency said.