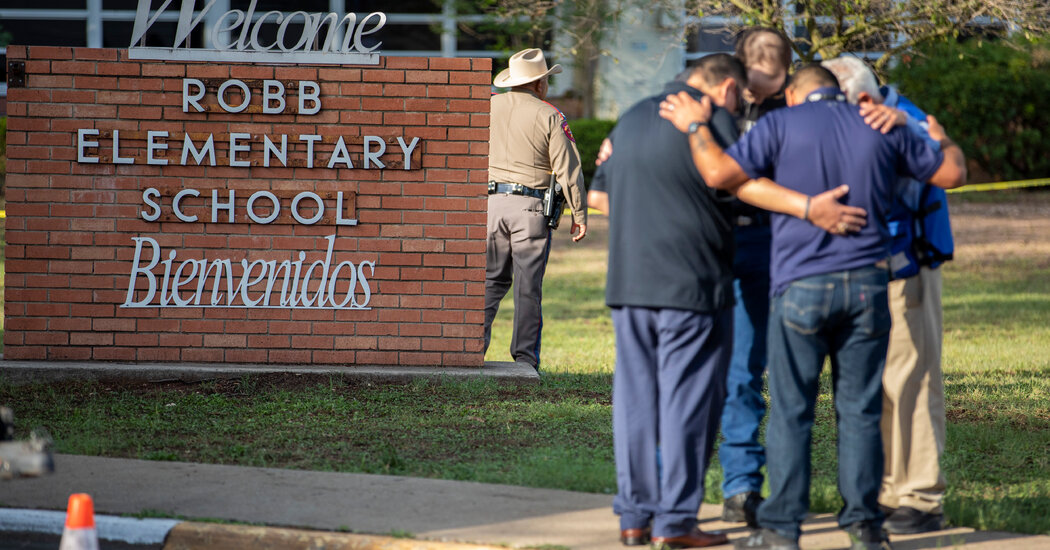 UVALDE, Texas — The gunman who killed 19 children and two teachers in a rural Texas elementary school on Tuesday entered the building despite being confronted by an armed school security officer, then wounded two responding police officers and engaged in a standoff inside the school for over an hour, state police officials said.

While gaps remained in the timeline of events, details emerged on Wednesday of a protracted scene of carnage at Robb Elementary School in Uvalde. What began around 11:30 a.m., with the first report of an armed man approaching the school, ended as specialized officers breached a pair of adjoining classrooms and killed the gunman barricaded inside just after 1 p.m., state police officials said.

It was not known how many were killed in the first minutes of the massacre, which was the deadliest in an American school since 20 children and six educators were shot to death at Sandy Hook Elementary School in Newtown, Conn., in 2012. But officials said that the officers had successfully contained the gunman, identified as Salvador Ramos, until more specially trained officers could arrive.

Yet even as the details of the attack became more clear, the motivation behind the eruption of violence remained frustratingly opaque. In the absence of an explanation, there was only deep grief in a community unaccustomed to outside attention, and a raw renewal of the national debate over firearms legislation and the stupefying tally of gun violence in America.

By Wednesday, all of the victims had been identified by the officials, who had yet to release their names, but the toll of the tragedy was only beginning to take shape.

All 21 fatalities occurred in a single area of the school, the authorities said. They included Eva Mireles, a teacher who ran marathons in her free time, and Jailah Silguero, 10, the youngest of four children. “I can’t believe this happened to my daughter,” said her father, Jacob Silguero, crying during an interview. “It’s always been a fear of mine to lose a kid.”

President Biden said he would travel to Uvalde in the coming days to try to comfort the residents. He did not call on Congress to take up gun safety legislation but in remarks on Wednesday said that the “Second Amendment is not absolute” and that previous gun safety laws did not violate its constitutional protections. “These actions we’ve taken before, they save lives,” he said. “They can do it again.”

Still, with little apparent opening at the federal level, states controlled by Democrats moved to introduce their own changes. In New York, Gov. Kathy Hochul said she would work to raise to 21 — “at a minimum” — the age for buying AR-15-style weapons like the one the Texas gunman used. In California, the State Senate advanced a bill along party lines, proposed by Gov. Gavin Newsom and modeled on Texas’ restrictive abortion law, that would let private citizens sue those who make or sell outlawed ghost guns, ghost gun kits and assault-style weapons.

In Uvalde, top Texas officials gathered for an emotional news conference that began with calls for unity in the aftermath of the killing. “It is intolerable and unacceptable to have in this state anybody who would kill little kids in our schools,” said Gov. Greg Abbott, who has celebrated the loosening of gun regulations in Texas and pushed for a new law last year that allows most Texans to carry a gun without a permit.

But the somber tone that Mr. Abbott sought to strike was upended by Beto O’Rourke, the Democrat challenging Mr. Abbott’s re-election, who blamed the governor for the repeated carnage in the state. “The time to stop the next shooting is right now and you are doing nothing,” Mr. O’Rourke said.

“Sit down, you’re out of line and an embarrassment,” the lieutenant governor, Dan Patrick, responded.

The interruption and resulting vitriol from the stage, filled almost entirely with Republican officials, revealed in an instant the entrenched battle lines over gun ownership and mass killing in the United States.

“I hate to say this but there are more people who are shot every weekend in Chicago than there are in schools in Texas,” Mr. Abbott said later. He criticized “people who think that, well, ‘Maybe we just implement tougher gun laws — it’s going to solve it,’” saying that “Chicago and L.A. and New York disprove that thesis.”

Gov. J.B. Pritzker of Illinois responded later by pointing to evidence that “the majority of guns used in Chicago shootings come from states with lax gun laws.”

Mr. Patrick said limiting entrances to just one at smaller schools could be a solution to keeping students safe. He also suggested arming teachers. Mr. Abbott stressed the need for better mental health care, though he did not propose how to improve access to it in the state.

Yet in the case of Mr. Ramos, there was little to raise official alarm ahead of the shooting, officials said. No history of mental illness. No apparent criminal record. “We don’t see a motive or catalyst right now,” said Steven McCraw, the director of the Texas Department of Public Safety.

But those who knew the gunman said he had been slipping away: He appeared to have dropped out of high school and often frightened co-workers at a fast-food restaurant where he worked. When picked on, he would lash out in response. Acquaintances said he frequently missed class and had few friends.

“He would curse at the customers, at the managers, even at me,” said Jocelyn Rodriguez, 19, an employee at the Wendy’s restaurant. She recalled that he once told her, “I’m going to shoot up the Wendy’s,” but she never took his threats seriously. “I thought he was joking.”

Two weeks ago, she said, he stopped showing up to work.

He purchased an AR-style rifle at a local retailer on May 17, a day after his 18th birthday. Then he bought another one on May 20, officials said. In between, he bought 375 rounds of ammunition.

He had been messaging obliquely about his plans with a 15-year-old girl in Germany who he had recently met online. The girl, who asked to be identified only by her nickname, Cece, said he had video-called her in the days around his birthday from a gun store, where he told her he was buying a rifle. Mr. Ramos also showed her, on the video call, a black bag that appeared to hold many magazines of ammunition and at least one gun.

On Tuesday morning, parents dropped their children off at Robb Elementary, a cheerful brick schoolhouse near the edge of Uvalde where everyone was preparing for summer break.

Narcedalia Luna and her 8-year-old grandson, a third grader, attended an end-of-the-year awards program in the school’s cafeteria. But her grandson told her that he wanted to go home early. So they did. “I gave in and I’m glad I did,” she said.

They returned to their home on Diaz Street.

Along that same short street, less than half a mile from the school, Mr. Ramos lived in a modest home with his grandmother. On Tuesday morning, Mr. Ramos texted the girl in Germany just after 11 a.m., apparently annoyed that his grandmother was calling AT&T about his cellphone. “Ima do something to her rn,” he wrote. The screenshots do not show Cece replying, but at 11:21 a.m., Mr. Ramos sent another text: “I just shot my grandma in her head,” followed immediately by another: “Ima go shoot up a elementary school rn.”

Mr. Ramos, officials said, had picked up one of the weapons he had bought, and shot his 66-year-old grandmother in the face.

The injured woman rushed to a neighbor’s house for help while Mr. Ramos sped off in her pickup truck, bringing with him a bag of ammunition and the two weapons. Ms. Luna said another neighbor spotted the grandmother with “blood on her face running across the street.”

The truck Mr. Ramos was driving, officials said, crashed at high speed next to the school at roughly 11:30 a.m.

As he approached the school, officials said, he encountered an Uvalde school district officer. There were conflicting reports, state police officials said, as to whether there was an exchange of gunfire at that point.

As the gunman approached, Juan Paulo Ybarra Jr. said, his little sister, a 10-year-old student at Robb Elementary, had been inside her fourth-grade class, watching a movie. He said she looked out of the classroom window and saw a man outside with a gun, then alerted her teacher. Soon the classroom could hear gunfire aimed toward nearby windows, she told him.

Mr. Ybarra said his sister described how she and her fellow classmates jumped out of the window, one by one, and ran to a funeral home across the street, seeking refuge.

The gunman entered the school. After he was inside, two officers from the Uvalde Police Department arrived, engaged the gunman and were immediately met with gunfire, officials said. Both were shot.

Soon, scores of police officers responded to the scene, but the gunman had barricaded himself inside what Mr. Abbott described as internally connected classrooms. It would take a tactical team, including specialized Border Patrol agents, to finally breach the room.

As they entered, one of the agents held up a shield so the other agents could file in behind, an official briefed on the investigation said. Three of the agents fired their weapons once they were in the room, striking the gunman several times and killing him shortly after 1 p.m.

In Uvalde, which lies in a rural area near the Mexican border dotted with desert willows and bigtooth maples, there are so few places to host large events that the governor’s news conference took place in the same high school the gunman had attended.

Classes were supposed to let out on Thursday for the summer. Instead the year ended early as parents were faced with the unthinkable, waiting for hours on Tuesday for the dreaded confirmation about the fate of their children, some having provided DNA swabs to prove their relationship.

“They were beautiful, innocent children,” said George Rodriguez, who had ties to two children killed in a shooting: a niece and a 10-year-old boy, Jose Flores, who he said had been like a grandson. Mr. Rodriguez said a counseling session at the local civic center had offered little relief from the pain of losing the boy whose photo he kept in his wallet, “my little Josécito.”