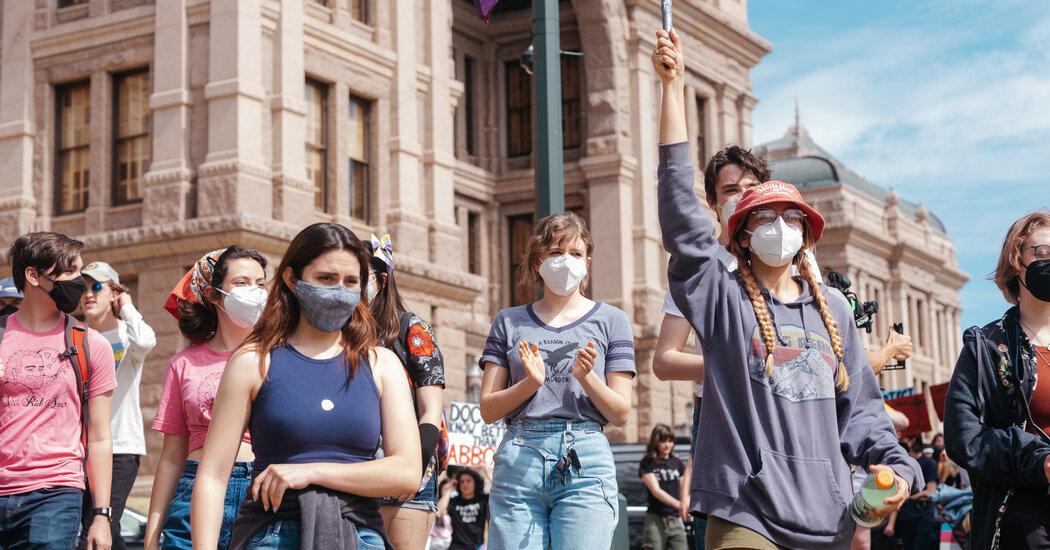 HOUSTON — Investigations of parents with transgender children for possible child abuse were temporarily halted across Texas on Friday after a state court ruled that the policy, ordered last month by Gov. Greg Abbott, had been improperly adopted and violated the State Constitution.

The injunction, issued by Judge Amy Clark Meachum in Travis County, stemmed from a legal challenge by the parents of a 16-year-old transgender girl. Her family was among the first to be investigated by the state’s Department of Family and Protective Services under Mr. Abbott’s order, which directed state officials to consider medically accepted treatments for transgender youth — including hormones and puberty-suppressing drugs — as abuse.

In issuing the ruling, which came after a day of testimony, Judge Meachum said the governor’s actions, and those of the agency, “violate separation of powers by impermissibly encroaching into the legislative domain.” She said there was a “substantial likelihood” that plaintiffs would prevail after a trial on the merits because the governor’s order was “unconstitutional.”

The ruling applied to all investigations initiated across Texas under Mr. Abbott’s order, which the court said could no longer be enforced pending a trial on the issue, set for July.

Though it was not clear how many inquiries had already been initiated, several parents of transgender children had come forward in recent weeks to say they had been contacted by officials from the state agency about the treatment their children had received. A spokeswoman for the department did not respond to a request for comment.

Judge Meachum last week temporarily halted the investigation of the family, which was named only as John, Jane and Mary Doe in court papers, but had left the question of the policy’s broader legality open until the hearing.

“The judge understood loud and clear the harms being experienced by families like Jane Doe’s,” said Karen Loewy, senior counsel at Lambda Legal, which represented the plaintiffs along with the American Civil Liberties Union. “She heard also loud and clear that this was an unauthorized action by the governor,” she added, “unilaterally changing the way that child abuse is interpreted.”

The state immediately appealed the decision.

Friday’s hearing brought out new facts about how investigations had been conducted since Mr. Abbott’s order in late February.

An investigations supervisor at the Department of Family and Protective Services testified that after the governor’s order, abuse investigators had been told to prioritize cases involving the parents of transgender children and to investigate them without exception.

“I’ve been told about that directly,” said Ms. Mulanax, who has submitted her resignation to the department. “You cannot priority-none these cases.”

Ms. Mulanax’s testimony came at the start of the Friday hearing over whether investigations into families with transgender children should be halted statewide.

The abuse investigations had represented a victory for conservative groups and activists who have engaged in a new round of action in state capitals aimed at transgender Americans. Mr. Abbott’s order — the first of its kind, according to transgender advocates — had placed medical providers and families of transgender children in the sudden position of fearing state investigations and possible criminal penalties for providing what is seen as medically accepted treatment.

There has been “outright panic,” Dr. Megan Mooney, a licensed psychologist whose clients include transgender children, testified on Friday. Dr. Mooney, who is required to report suspected child abuse under Texas law, is also a plaintiff in the case.

“It puts medical professionals I work with in a horrible position,” she said of the order. At least one major hospital, Texas Children’s Hospital in Houston, has restricted its care for transgender children.

The hearing took place on the same day that more than 60 major businesses, including Johnson & Johnson, Google and Levi Strauss & Co., began an advertising campaign in Texas protesting Mr. Abbott’s order and the abuse investigations.

The case began with the challenge last week by the 16-year-old transgender girl and her parents. The teenager’s mother, an employee of the state’s family protective agency, has remained anonymous in court filings.

Wearing a wig and glasses, the mother testified on Friday about the details of the investigation into her family and its emotional toll. Her testimony, unlike that of the other witnesses, was not shown on the video stream of the hearing.

In a declaration filed with the suit, Ms. Doe said that she was “terrified” for her daughter’s health and well-being, and that she felt “betrayed by my state and the agency for whom I work.”

The plaintiffs in the case sought a statewide injunction, arguing that the governor’s order violated the State Constitution, as well as the rights of the parents and their transgender children.

Ms. Mulanax, a witness for the plaintiffs, described a virtual meeting of senior leaders last month in which they discussed the handling of investigations under the governor’s order, which was issued on Feb. 22. She said she and others were told not to put information about the cases in email or text messages — instructions that she said were highly unusual in her years of experience at the agency.

An opinion and an order. Attorney General Ken Paxton recently issued an opinion stating that providing treatments like puberty-suppressing drugs to transgender teenagers should be investigated as child abuse. Shortly after, Gov. Abbott reaffirmed the notion in a letter to state health agencies.

“Have you ever been told not to put information on cases in writing?” asked Brian Klosterboer, a lawyer with the A.C.L.U.

“What did you make of the instruction to not put anything in writing?”

The Texas Department of Family and Protective Services has struggled for years to care for children in its foster care system and to conduct investigations into child abuse.

The agency has been the subject of a decade-old federal lawsuit over its foster care system, in which children faced abuse as well as long waits to be adopted or placed in safer homes. Federal monitors have been overseeing the process of carrying out judicial orders since 2019, among them a directive to improve the handling and investigation of reported child abuse.

A federal court held an emergency hearing on Thursday, unrelated to the fight over transgender children, regarding a report of sex trafficking, abuse and neglect of children at a foster care facility in Bastrop that is under contract to the state. Mr. Abbott called the report “abhorrent” in a statement, and said that “child abuse of any kind won’t be tolerated in the state of Texas.”

But the bounds of what constitutes child abuse was the question being wrestled with at the hearing on Friday in front of Judge Meachum.

Ms. Mulanax, the state investigations supervisor, said that she disagreed with the governor’s order and with her agency’s response to it, and that she had decided to resign because of it. “I have always felt that the department has the children’s best interest at heart,” she said. “I no longer feel that way with this order.”

Reports of parents possibly providing puberty-blockers, hormones or other medically accepted treatments to their transgender children were being handled differently from other reports of child abuse, she testified. “These are not being treated the same,” Ms. Mulanax said during the hearing. “We had to be investigating these cases.”

A spokeswoman for the agency did not respond to a request for comment about Ms. Mulanax’s testimony.

During cross-examination, a lawyer for the state said that Ms. Mulanax’s job at the agency was to apply the law regarding child abuse, which the Texas attorney general, Ken Paxton, had determined in a nonbinding legal opinion included medical treatments for transgender youth.

“To my knowledge, no,” Ms. Mulanax responded.

Had a child been taken off medication prescribed by a doctor?

The state did not present witnesses or evidence of its own during the hearing.