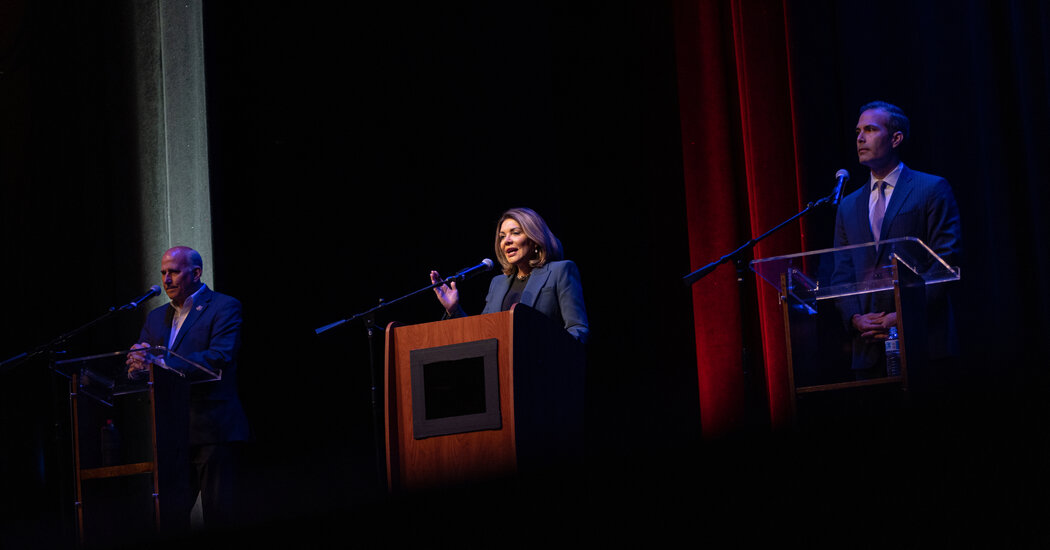 MIDLAND, Texas — The litany of political vulnerabilities facing the Texas attorney general, Ken Paxton, would appear to seriously imperil his bid for a third term.

There is the indictment in state court for securities fraud. Accusations of bribery and corruption. Senior aides turned whistle-blowers. An ongoing federal investigation.

But whether Mr. Paxton can survive the Republican primary may be the biggest test yet of the power still wielded with voters by an even better-known name: Donald J. Trump.

Mr. Paxton has positioned himself as the most aligned with Mr. Trump in a field of opponents eager to claim closeness with the former president. The Texas attorney general unsuccessfully sued to overturn the results of the 2020 election in several states and spoke at Mr. Trump’s “Stop the Steal” rally in Washington on Jan. 6, 2021.

For his efforts, Mr. Paxton garnered Mr. Trump’s endorsement last year, and he had a speaking role at Mr. Trump’s massive rally of Republicans last month north of Houston.

“An attorney general who has really led the way, somebody who has been brave and strong: Ken Paxton,” Mr. Trump effused during the rally at the Montgomery County fairgrounds. “Ken, brave and strong. And popular.”

Well, not that popular.

While polling better than any of his opponents, Mr. Paxton is facing the increasingly likely prospect of ending up in a runoff after the primary election on Tuesday. He has been below the 50 percent threshold in recent public polls, and his campaign is already preparing for another contest.

That has left the three challengers scrambling for second place. They have been crisscrossing the state, appearing in Republican forums and debates hosted by local party groups. A common theme has been that Mr. Paxton is so embattled he could actually lose to a Democrat in November — a shudder-inducing prospect for Texas Republicans, who have not lost a statewide race since 1994.

“When you look at folks like A.O.C., for example, who come to Texas and say Texas is about to turn blue — well, she’s right if we nominate the wrong people as a party,” said Mr. Bush in an interview, referring to Representative Alexandria Ocasio-Cortez of New York.

The race for attorney general has become a referendum on the future of the Republican Party in Texas, with various power centers — the remnants of the Bush political dynasty in Texas, the tort reform business elite, the ascendant Trump-without-Trump wing — lining up in different corners.

In the waning days of the campaign, attacks have flown freely. Mr. Paxton has traded barbs with Mr. Gohmert. Mr. Bush and Ms. Guzman have gone after each other. But many voters, even those dedicated enough to show up at candidate forums, are only glancingly familiar with the challengers. And accusations against Mr. Paxton are not a new development; he has weathered them for years.

Mr. Paxton, who declined an interview request, has been facing state charges of felony securities fraud since 2015, stemming from his time as a member of the Texas House during which, prosecutors have said, he directed investments to a firm without disclosing he would be compensated for doing so. Mr. Paxton has denied the charges and said the prosecution was politically motivated, and successfully delayed the trial amid procedural wrangling over where it should take place.

He was re-elected in 2018 by less than 4 percentage points, a narrow margin in a Texas general election.

Then, in 2020, several of Mr. Paxton’s top aides — high-ranking lawyers in the attorney general’s office with conservative credentials — accused him of bribery and abuse of power in connection with his actions on behalf of a real estate developer and campaign donor. Some of the officials, who have since been fired or resigned, have said the developer, Nate Paul, also hired a woman recommended to him by Mr. Paxton.

Last week, four of the former officials, who filed a whistle-blower suit against Mr. Paxton over their firing, said the attorney general had been lying about their allegations as he campaigns for re-election.

A spokeswoman for the F.B.I. declined to comment. Both Mr. Paul and Mr. Paxton have denied any wrongdoing.

Even with the swirl of accusations, Mr. Paxton has not been as weak a candidate as some in Texas political circles thought he would be.

“People thought that Paxton would be vulnerable,” said Nathan McDaniel, a Republican political strategist based in Austin. “But what I see voters want is a fighter, someone who is going to sue Google or the Biden administration” as Mr. Paxton has done, repeatedly in the case of President Biden. In recent days, Mr. Paxton also took aim at the parents of transgender adolescents, issuing a formal opinion that certain medical treatments should be investigated as child abuse.

“I don’t think personal woes matter as much to the electorate as you might think they do,” Mr. McDaniel said. “Now, if he’s in prison, that’s a whole different thing. But is that going to happen? I don’t think so.”

In an interview, Mr. Gohmert predicted that Mr. Paxton would face corruption charges in federal court soon after the primary, leaving Republicans without a chance to replace him before the November general election if he were to win the primary.

In response, Mr. Paxton’s campaign sent a statement from the attorney general attacking Mr. Gohmert for “clearly relying on lies, scare tactics and intimidation to win.”

Political strategists said Mr. Gohmert represents the biggest threat to Mr. Paxton’s base of conservative support. Mr. Gohmert entered the race later than the other candidates, in November, but he has already attracted negative campaign mailers, Facebook ads and a television spot from Mr. Paxton.

Mr. Gohmert also has had a friendly relationship with Mr. Trump and was the only other person running for attorney general whom Mr. Trump spoke fondly of during the rally last month.

“Louie Gohmert, what a wonderful guy,” Mr. Trump told the crowd, acknowledging Mr. Gohmert among the elected officials there. “This is a man who has been a friend of mine from day one.”

Mr. Bush, who tried hard to get Mr. Trump’s endorsement, did not attend the event because of a scheduling conflict, his campaign said.

“I definitely wanted that endorsement along with the support of his supporters. That’s why I continue to reach out to not only his followers but also to those who advise him here in Texas,” Mr. Bush said in the interview, adding of Mr. Trump: “I think he made a mistake on this race.”

Ms. Guzman, for her part, has been running a targeted campaign, seeking to peel off voters in unexpected places.

“I have seen an Eva Guzman commercial during ‘Jeopardy!’ for the last week or two,” said Mari Woodlief, a Dallas-based political consultant. “‘Jeopardy!’ and ‘Wheel of Fortune’ are two of the best kept secrets in politics because their audience is almost all 60-plus and they’re voters.”

At a campaign forum this month, the three battled before a staunchly conservative audience in a theater on the oil-rich plains of West Texas between Midland and Odessa. Each vowed to take a harder line than Mr. Paxton on the border, on crime and on allegations of fraud in Texas elections.

The hourlong debate began with Mr. Gohmert attacking Mr. Paxton for not doing more to investigate allegations of fraud in 2020 and ended with Mr. Bush vowing to fight liberal Democrats who “infest our local governments.” Along the way, Ms. Guzman held the crowd rapt with the story of her father’s killing “by an illegal immigrant” when she was 26.

In an interview before the gathering, Ms. Guzman said the experience of seeing her father “covered in a yellow tarp” underscored for her how “these lawless borders are not victimless.” She said her experience on the bench made her better prepared for the job than any of her opponents.

Ms. Guzman, who has the financial backing of Texans for Lawsuit Reform, a perennial power player in Republican politics, downplayed Mr. Trump’s endorsement of Mr. Paxton. “Texans want to choose for themselves,” she said.

After the debate in the lobby of the theater, Roger Barnhart, 74, of Odessa and his son said they still had not decided who they would vote for.

“I like Gohmert the most,” said Mr. Barnhart, adding that he was also impressed by Ms. Guzman.

“A long time ago it used to be good to have the last name Bush out here — not anymore,” added his son, Dax Barnhart, 47, who works with his father in the hardware business.

Though he had yet to make up his mind, the elder Mr. Barnhart came away with one solid impression of the candidates: “Any of them would be better than Paxton.”