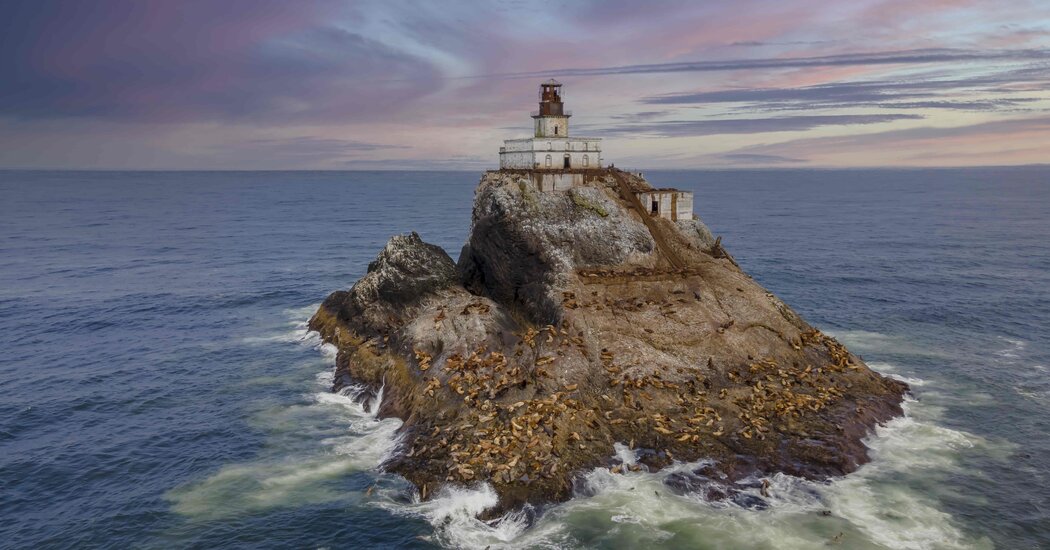 From a distance, the Tillamook Rock Lighthouse looks like a real-estate investor’s dream. There are views of Oregon’s coast from the tower, perched on a rugged island a mile offshore. Most days, the solitude is broken only by the sound of crashing waves, and the seclusion by nesting birds and sea lions.

After more than a century weathering storms, guiding ocean mariners, hosting wildlife and serving as a repository for cremated human remains, the lighthouse known in local legend as Terrible Tilly is being prepared for its next owners.

But first, they will need $6.5 million, a unique vision and a way to get there.

The island is a craggy basalt rock that juts up from water so rough that boats cannot dock. It can be reached only by helicopter, and even those sometimes have to circle until the sea lions have shuffled off the landing pad, said Mimi Morissette, director of Eternity at Sea, the Oregon-based company that owns and is selling the lighthouse.

The building and lantern tower need gut renovations. Sea lions and pounding storms have busted through doors. Windows are boarded. Nesting birds have coated surfaces with droppings. Urns holding remains, including those of Ms. Morissette’s parents, are stashed inside.

Ms. Morissette has introduced Terrible Tilly to the businesses she thought might be the best fit for its next stewards: the death industry.

Photographs of the lighthouse and pamphlets were displayed at the annual convention of the International Cemetery, Cremation & Funeral Association in Las Vegas in March. Some cemetery owners balked, thinking customers would not want to store remains in a facility they could not visit, she said.

“My response was that we know that our project is not for everyone,” she said. “I have an inquiry from a local helicopter company, which could be a perfect match with a company in the death care industry.”

Who wants to buy a lighthouse, anyway?

Over 300 years, more than a thousand lighthouses were installed in the United States, guiding mariners from ship-crushing shorelines.

Some have been destroyed in natural disasters or replaced by automation and transformed into residences, inns and museums. Up to five lighthouses are sold every year through government auctions.

The beacon and foghorn of Tillamook Rock Lighthouse were activated in 1881. As Oregon’s only offshore light, its inauguration was overshadowed by tragedy, coming three weeks after the British ship Lupata rammed into a nearby promontory in fog on Jan. 3, killing all aboard.

For 76 years, Tilly guided ships to Columbia River shipping lanes until it was decommissioned in 1957, replaced by an electronic buoy, according to the National Register of Historic Places.

But the tower, rising 136 feet above sea level, continued to inspire tales and visions, though it appears as but a wisp in the distance from Oregon’s beaches.

It became known locally as Terrible Tilly because of the isolated and stormy conditions workers endured while tending it, said Andrea Suarez-Kemp, manager of the Cannon Beach History Center and Museum.

“Everyone loves to tell stories of seeing mysterious lights and figures, especially during and after a good storm,” she said. “People come into the museum a lot to ask us if Tilly is really decommissioned, because they could swear they saw lights.”

In 1959, the U.S. General Services Administration put the lighthouse up for sale. A group of Las Vegas investors purchased it for $5,600, possibly to install a casino, and then sold it for $11,000 in 1973 to George Hupman, a General Electric executive in New York, who wanted to use it as a summer retreat, according to the register.

The Hupman family rented a helicopter for $260 an hour, flying three passengers at a time. They found the one-acre island taken over by birds and the stench of droppings.

“Sure, it’s dilapidated,” Mr. Hupman told KGW in 1978, in a video recorded on the island as his family tried to clean up.

“The paint’s peeling off, and it’s a mess inside and out,” he said. “But that structure’s going to be there for a long time, one way or another. And, I don’t know, it’s an exciting and strong place in midst of a moving and turbulent environment. It gives you a great feeling, being here.”

After a few trips, he sold it for $27,000 to Max Shillock Jr. of Portland, the register said. He eventually ceded the property to his lender, The Oregonian said in its report last month.

Ms. Morissette and partners purchased it in 1980 for $50,000 to use as a columbarium, state records show. It lost its license in 1999 and was rejected for a new one in 2005 because of violations that included poor record-keeping and improper storage, according to the records. Ms. Morissette said it was shut down for a technical violation, The Times reported in 2007.

How to sell an island columbarium

This month, Ms. Morissette put out a call on her Facebook page for volunteers to “be part of Tilly’s history and salvation” and fly out to help clean up the island after the summer. Because it’s a nesting sanctuary, visiting is not allowed from April to September, she said.

“Part of the cleanup is to evict the sea lions that have knocked in the corroding front door, which will be replaced with a permanent titanium door,” she said in an interview.

The plan is for the lighthouse to appeal as an alternative to scattering cremated remains at sea, by encasing them in titanium urns in a bank of niches.

David Adams, a funeral business consultant with the Johnson Consulting Group in Scottsdale, Ariz., who is brokering the sale, is aiming for an official pitch by Memorial Day.

“It’s going to have to take somebody with an entrepreneurial spirit,” he said.

The cremation rate in the United States was low when Ms. Morissette, a 77-year-old Oregon resident with a background in real estate development, purchased the lighthouse over four decades ago. The rate reached 56 percent in 2020 and is rising, the Cremation Association of North America said.

“I find it intriguing some people still like the romance of scattering ashes at sea: ‘Dad’s out in the ocean and Mom’s still floating with sharks,’” Mr. Adams said.

“Although romantic in many regards, it is somewhat final. There is no real place to focus on, to go back and memorialize,” he said.

The lighthouse, he added, “gives them a specific focal point.”

The light keepers of Tillamook Rock

Whether entrepreneurs or dreamers, the new owners will inherit a structure where years of dramatic history unfolded.

There were two deaths: A mason tumbled into the ocean in 1879, and a painter fell off a ladder onto the rocks in 1911. “It is a mysterious place, and a little macabre,” said Brian Ratty, the author of “Tillamook Rock Lighthouse: History & Tales of Terrible Tilly.”

In 1944, James A. Gibbs Jr., a Coast Guardsman, was deployed to the lighthouse as one of four keepers. A small boat transported him to the island, where he climbed into a harness that was lowered from above and was hauled up by rope, dangling over waves crashing against the rocks, he wrote in his memoir, “Tillamook Light.”

“Everywhere I looked, the place took on more of the aspects of an insane asylum instead of what I had pictured a lighthouse to be,” he wrote.

The men stood eight-hour watches and took turns cooking. Seas leaped 134 feet to the top of the lantern tower, breaking windows and filling it with rocks and debris. The foghorn was deafening. A moaning “ghost” haunted the winding, 77-step staircase. The light itself was like a “monstrous diamond” that beamed 18 miles out to sea in warnings to ships.

“What had I gotten myself into?” he wrote.

In an interview in 2009, Mr. Gibbs, then 87, said it was a mystery how the lighthouse and its keepers had withstood so many years of spirits and storms. “I thought many times of jumping off the rock when I first got there,” he said.

On Sept. 1, 1957, Oswald Allik, one of Mr. Gibbs’s fellow keepers, wrote a farewell message to the lighthouse in the final entry in its log.

“Keepers have come and gone; men lived and died; but you were faithful to the end,” Mr. Allik wrote. “May your sunset years be good years.”