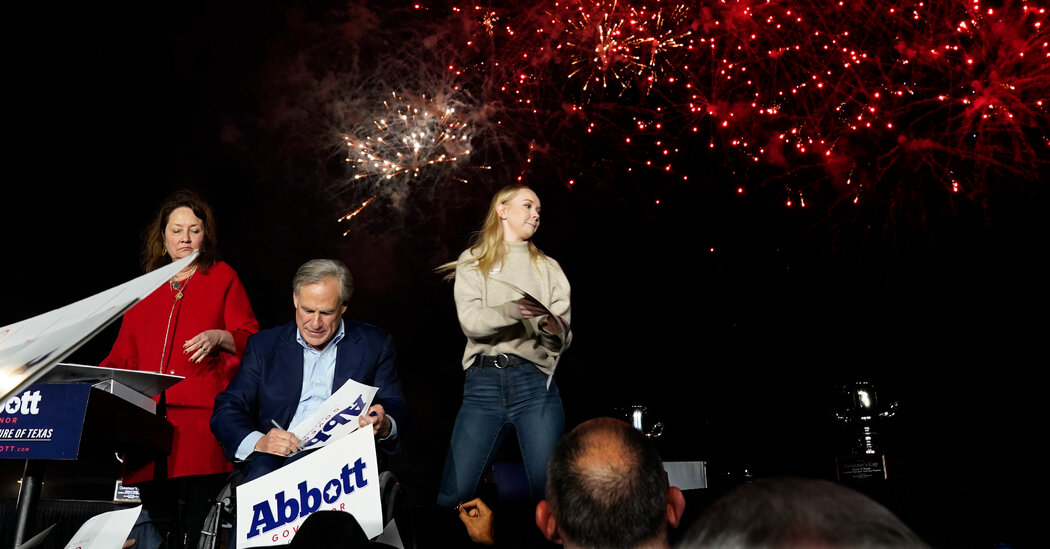 For nearly a decade, the refrain from Texas Democrats has been that they are on the verge of making their state competitive, even though no Democrat has won a statewide race since 1994.

Tuesday’s primary results illustrated that Democrats still have a long way to go.

With more than three-quarters of the votes counted, nearly 800,000 more Republicans than Democrats voted for a candidate for governor — a gap far larger than the one in 2018, the last midterm primary election in Texas.

To be sure, Republicans had a more competitive primary than Democrats. Gov. Greg Abbott’s contest against Republican challengers from his right may have been more of a draw than Beto O’Rourke’s glide path to the Democratic nomination. And Democrats will be quick to note that primary turnout is not always a predictor of big turnout in November.

Still, Republicans demonstrated they are energized — even when divided between far-right and mainstream factions — and hardly ceding their hold on the state.

Before this year, Mr. Abbott had never faced a competitive Republican primary in his 25-year political career. But in a moment of conservative energy, with Republicans furious about the 2020 election and President Biden’s immigration policies, a field of Republicans bet that Mr. Abbott would be vulnerable to a challenger from his right.

Turns out they were wrong.

Armed with a $60 million war chest, Mr. Abbott easily dispatched seven Republicans, taking more than two-thirds of the vote. It was a win that was a year in the making. Mr. Abbott has spent much of last year placating the state’s conservative base by passing new restrictions on abortion, easing gun laws and enacting new limits on how Texas schools teach about the history of racism. Days before the primary, Mr. Abbott directed state health agencies to classify medical treatments commonly provided to transgender adolescents as “child abuse.”

Mr. Abbott’s record was a striking demonstration of how a primary threat can help the right wing of the Republican Party drive the agenda, even in a state that has been trending toward Democrats.

In the general election, Mr. Abbott will again be a heavy favorite, this time against Mr. O’Rourke, the Democrat and former congressman who narrowly lost a 2018 race to Senator Ted Cruz and then flopped in the 2020 presidential primary.

Mr. Abbott has been said to have presidential ambitions himself, if Mr. Trump does not run again in 2024. The next step on that journey for him will require a decisive victory in November. In a year when Republicans are expected to do well, he will need a show of strength in Texas to make a case he can appeal to voters nationwide.

Four years ago when he ran for the Senate, Mr. O’Rourke took just 61 percent of the 2018 Senate primary vote even though he was running against little-known, poorly funded candidates.

Now, after Mr. O’Rourke has become the best-known figure in Texas Democratic politics, he easily dominated a field of four Democratic primary opponents.

Mr. O’Rourke took more than 90 percent of the primary vote, carrying nearly all of the 254 counties in Texas after losing 76 of them four years ago.

Mr. O’Rourke’s broad win was a reminder that he enters this race as a far different candidate than the plucky underdog who became a national star in 2018. Now running for governor, Mr. O’Rourke has name recognition and the state’s largest fund-raising network, but also baggage from his previous races. His call for government confiscation of some firearms will continue to appear in Republican attacks against him, and he also has to overcome significant G.O.P. advantages in the state.

As the first primary contest of 2022, Texas previewed what will be a dominant theme of the primary season: Can Donald J. Trump play kingmaker?

Mr. Trump’s record was mixed. The former president endorsed 33 Texas Republicans ahead of their primaries, but virtually all of them were widely expected to win before receiving the Trump seal of approval. As of early Wednesday morning, all of Mr. Trump’s picks for Congress were on pace to win their nominations.

But other races raised doubts that Mr. Trump’s approval alone could secure a victory. Attorney General Ken Paxton, who was endorsed by Mr. Trump, and Dawn Buckingham, Mr. Trump’s choice for land commissioner, were both headed to runoffs in May, after failing to get more than 50 percent of the vote.

“Big night in Texas!” Mr. Trump said late Tuesday. “All 33 candidates that were Trump endorsed have either won their primary election or are substantially leading in the case of a runoff.”

There were also signs that it can be perilous for Republicans to cross Mr. Trump. Representative Van Taylor, a two-term incumbent from the Dallas exurbs who voted to confirm the 2020 election results and for a commission to investigate the Jan. 6 attack on the United States Capitol, was in danger of being forced into a runoff as votes were still being tallied early Wednesday. Mr. Taylor outspent his competitors nearly 10 to 1.

That figure may put a scare into Republican incumbents facing more significant tests from Trump-backed challengers in the coming months. Representative Liz Cheney of Wyoming, Senator Lisa Murkowski of Alaska and Republicans who voted for impeachment from Michigan, South Carolina and Washington State are all vulnerable and the subject of Mr. Trump’s obsession.

Jasmine Crockett, a state lawmaker who was among the ringleaders of Texas Democrats’ flight to Washington to delay new Republican voting laws last summer, has a large lead but appears bound for a runoff in a Dallas-area district. Ms. Crockett was endorsed by Representative Eddie Bernice Johnson, who has represented the district for 35 years. Ms. Crockett leaned into the endorsement: Her campaign slogan was “passing the torch, fueling the fire.”

Together, Mr. Casar, Ms. Cisneros and Ms. Crockett would bring new energy to the liberal wing of the House and to “the Squad” of progressive Democrats. Last month, Representative Alexandria Ocasio-Cortez of New York came to Texas to campaign for Mr. Casar and Ms. Cisneros.